The long-time BMW M vs. AMG rivalry once again comes into spotlight as the newest addition to the M5 family encounters Mercedes-AMG’s top contender in a fierce visual competition. The all-new BMW M5 CS is the most powerful vehicle ever tweaked by the Garching-based division, also making it the mightiest 5 Series and M5 model to-date. It packs 467 kW / 635 PS (626 hp) and a host of lightweight and high-end performance measures, sufficient arguments to justify the extra EUR 50,000 over the M5 Competition. 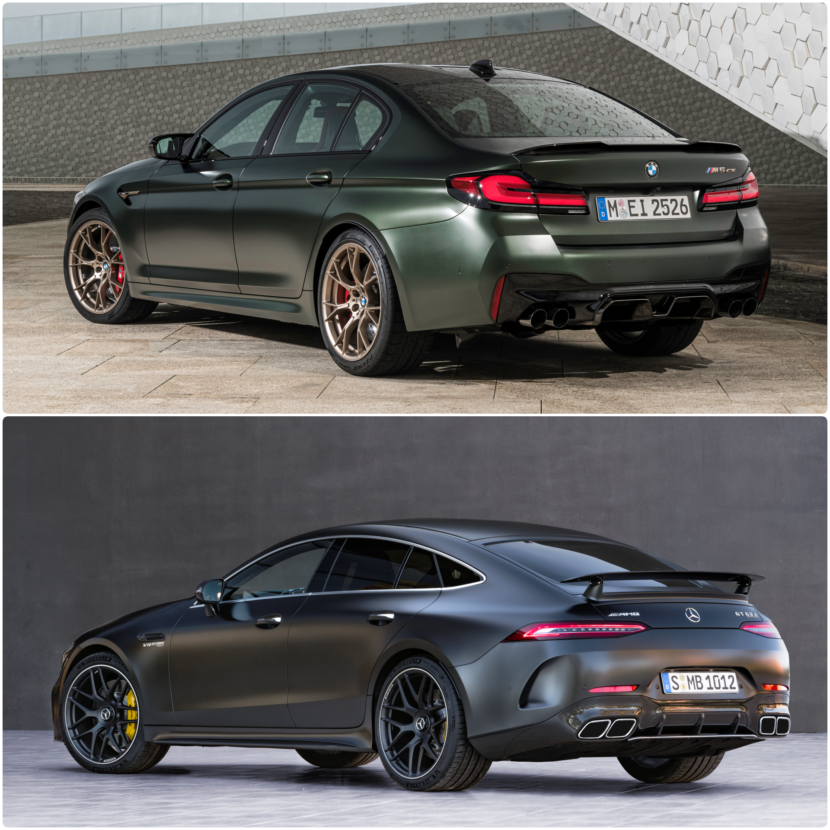 The M5 CS does not necessarily have a direct opponent from the Mercedes-AMG division, but for the sake of comparison and similarity, we felt that the GT 63 S 4MATIC+ four-door coupe might be quite well suited for the job. For starters, both contenders have almost equal peak outputs, with the Affalterbach model having a small advantage of 3 kW / 4 PS (4 hp) over the M5 CS.

When it comes to judging their exterior design, we are faced with highly different styling philosophies. The GT 63 S 4MATIC+ builds its appearance on tried-and-tested looks of the GT 2-door sibling, while its roofline and overall silhouette sends us pretty strong CLS vibes.

On the contrary, the M5 CS plays a safe card, being a proper 4-door sedan, based on the successful 5 Series formula and boasting with elegant and muscular proportions, which are further accentuated by visible character lines. 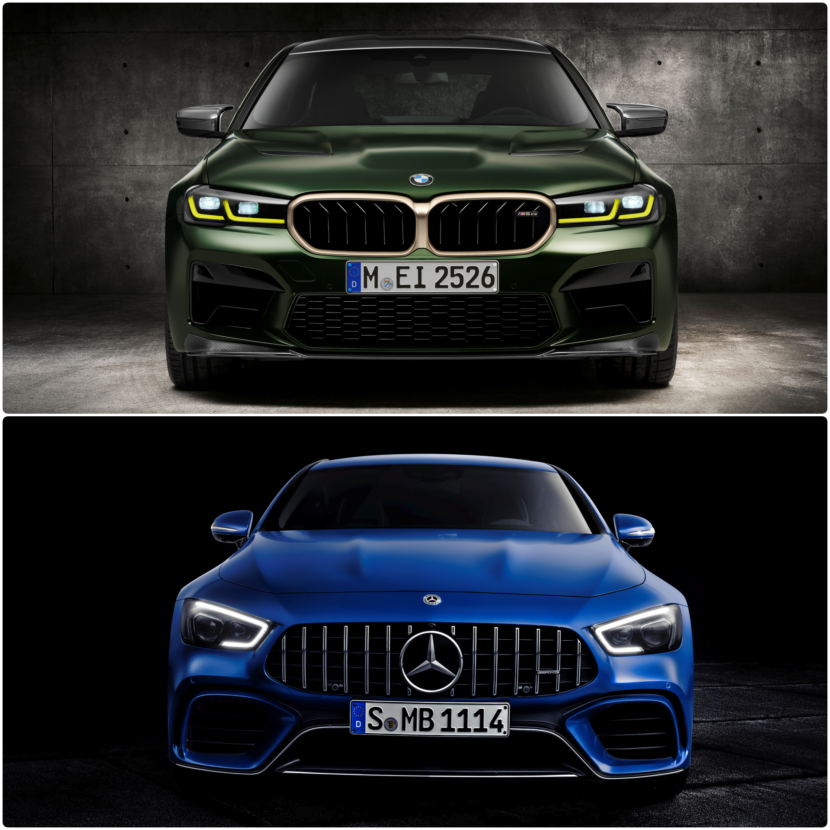 At the front end, the Bavarian impresses with its confident, robust and traditional straight cues. Like a proper business card, the kidney grille is further emphasized thanks to 3D effect and the Gold Bronze surround, a theme that is also continued on the standard BMW Laser headlights, whose LED filaments are lit up in yellow for Welcome Light and when low beam/high beam phases are selected.

The central air vent and side intakes of the new M5 CS are aerodynamically optimized and also improve the engine cooling. They retain the basic quadrilateral shape of the M5/M5 Competition LCI, with a high-gloss black upper lid for the side vents. Apart from the specific individualization measures, the new M5 CS is a familiar presence. 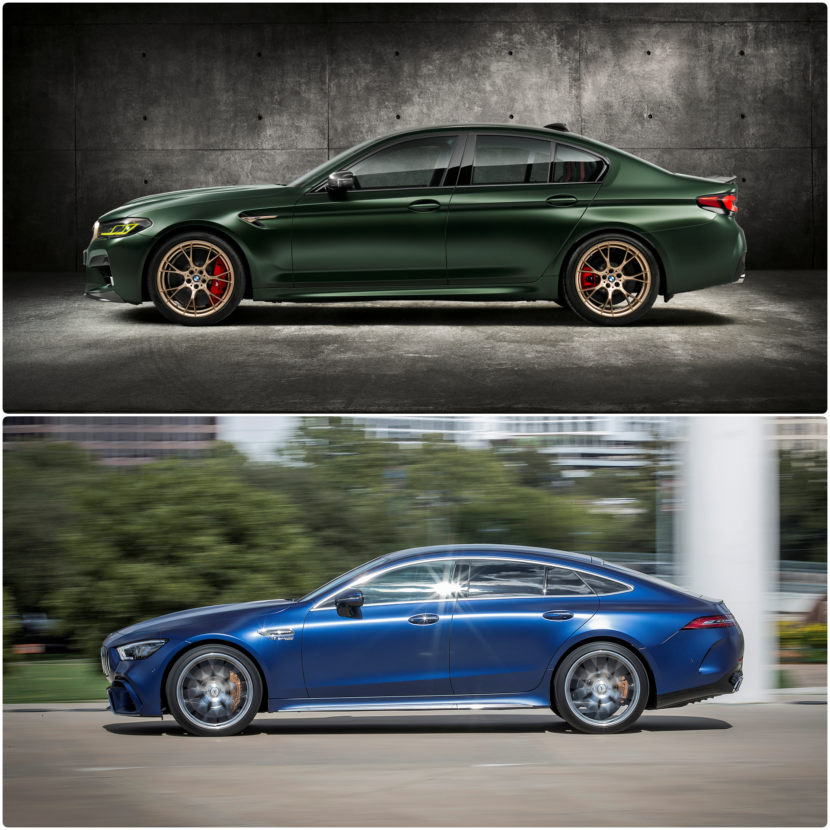 The Mercedes-AMG GT 63 S 4MATIC+ applies a different recipe. The approach is, frankly, quite “in your face”, as the front end of the four-door GT is dominated by the huge Panamericana grille with horizontally-positioned slats and the mighty side air vents. The LED headlights are somehow inspired by the 2-door GT model, but have their very own signature and shape.

Seen for the side, both models ooze sheer muscularity and power. The silhouette of the M5 CS is clearly emphasized by the straight shoulder line and the iconic Hofmeister kink. Furthermore, to further distinguish itself, the alloys are also painted in Gold Bronze shade. On the contrary, the Merc is expressing a more puristic approach, with a cleaner profile and faded details. 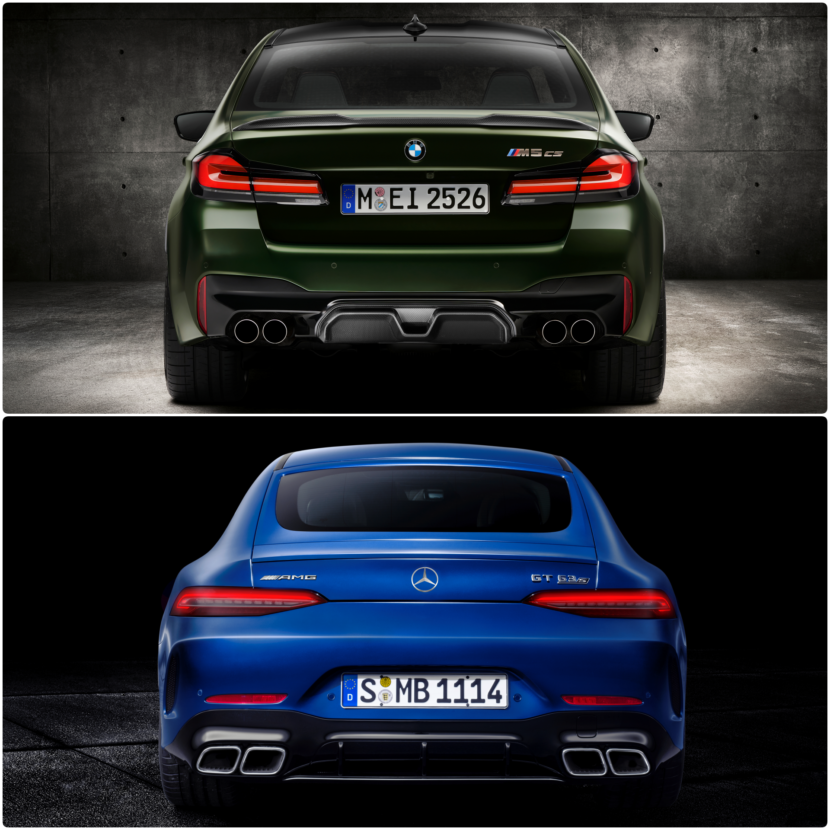 At the rear end, the new M5 CS is a familar sight once again, with its big L-shaped LED rear lights with black accents. The revised tail features a carbon-fiber spoiler and diffuser, together with the “CS” badge (standing for the historic “Club Sport” meaning) are the ultimate proof that this is indeed the best M5 in history. Other than these, there’s not much differentiation from the basic M5 or the higher-placed M5 Competition. The exhaust pipe finishers are featured in high-gloss black and expose a traditional round shape.

Once again, the difference between the two carmakers is visible when looking at Merc’s rear end. Slimmer tail lamps and trapezoidal exhausts are also on the menu, together with a more rakish tailgate that reminds us pretty much of the GT coupe model. 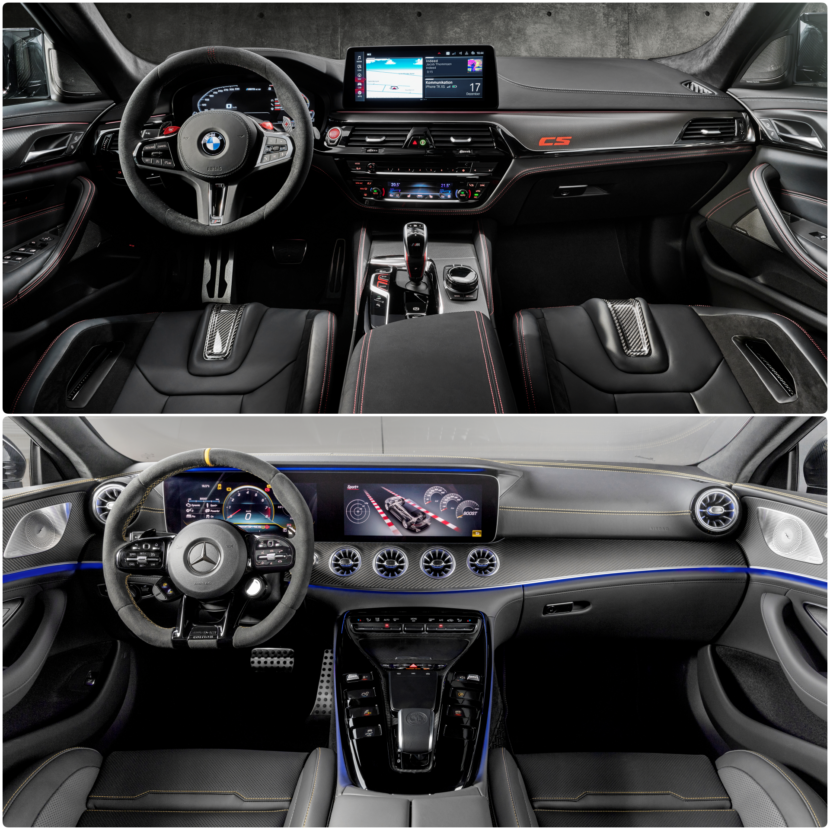 The individual philosophies get even more striking when going inside the two contenders. While the special CFRP seats on the new M5 CS might be quite similar to what we see on the Merc, the overall dashboard architecture and design of the two models are powerful representatives of two separate schools.

On one hand, the BMW is blending in traditional and modern cues, harmoniously integrating the digital screens into the overall design. On the other hand, the Mercedes-AMG applies a different strategy in the race to look more futuristic: a big digital slab comprising two screens and a reduction of the physical buttons and controls to the utmost minimum. 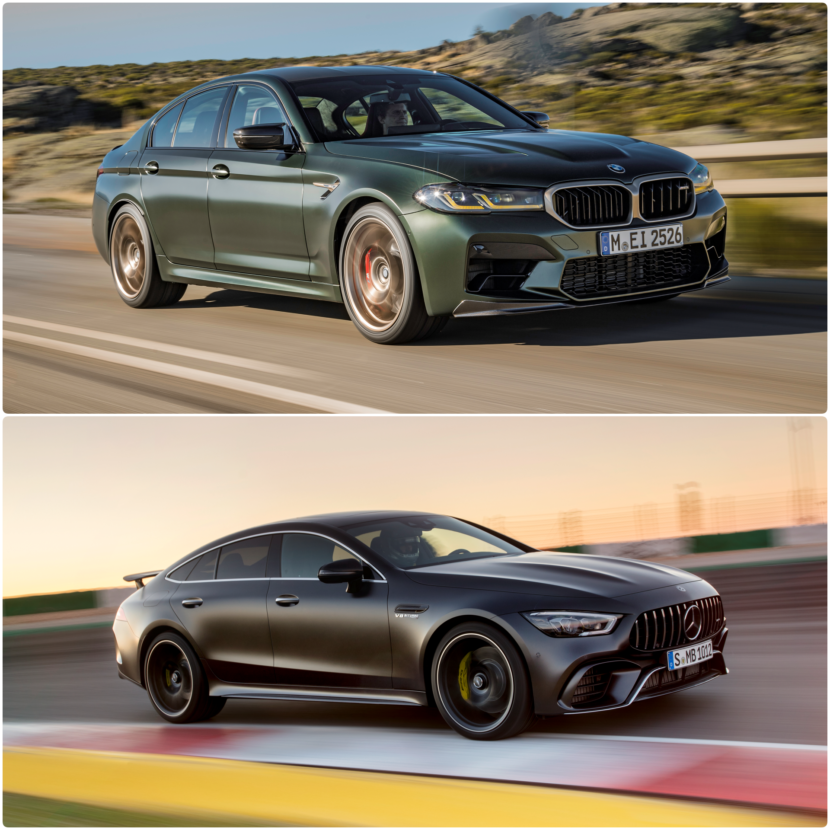 In the end, if we are to have a definitive conclusion in this contest, it would be a rather hard challenge, as in the end it all comes down to personal affinities. Both cars have compelling virtues, both have an outrageous level of performance and state-of-the-art attributes which makes them competent and individual.