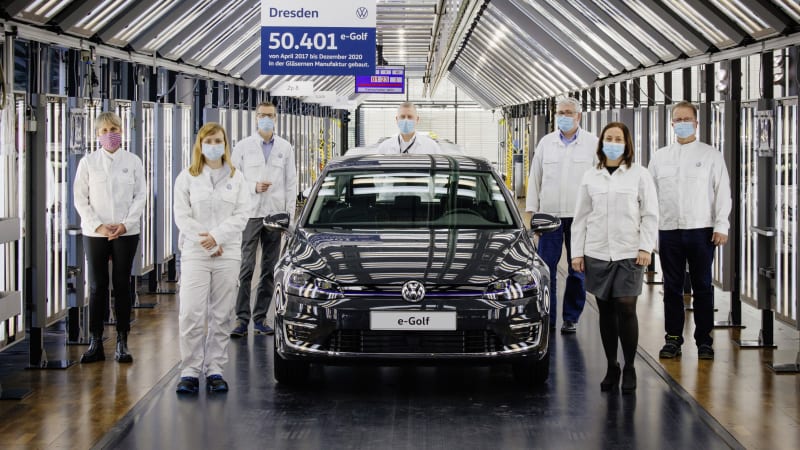 Volkswagen announced earlier this year that there would be no 2020 model year e-Golf sold here, effectively killing the electric hatchback in the U.S. Today, VW says it’s ending worldwide production of the e-Golf to make way for the new ID.3.

Two production facilities (Dresden and Wolfsburg) built the e-Golf over the years, churning out a total of 145,561. The last one rolled off the line at the Transparent Factory in Dresden, which is fitting considering it’s the same factory that will be producing ID.3s by January. Other highlight models from this factory include the Volkswagen Phaeton and Bentley Flying Spur.

The photos at the top show the last e-Golf painted up in Uranogrey paint. VW’s electric hatch never really caught on in the U.S. Its low 125-mile range and similarly disappointing 134-horsepower electric motor shoulders most of the blame for that outcome. A new ID.3 can be had with as much as 342 miles of range (on the WLTP cycle) and 201 horsepower.

We won’t get the ID.3, but the gulf in performance between it and the e-Golf illustrates how far VW has come in EVs since 2014. VW is sending us the ID.4 instead, a crossover that is more suited to American tastes.