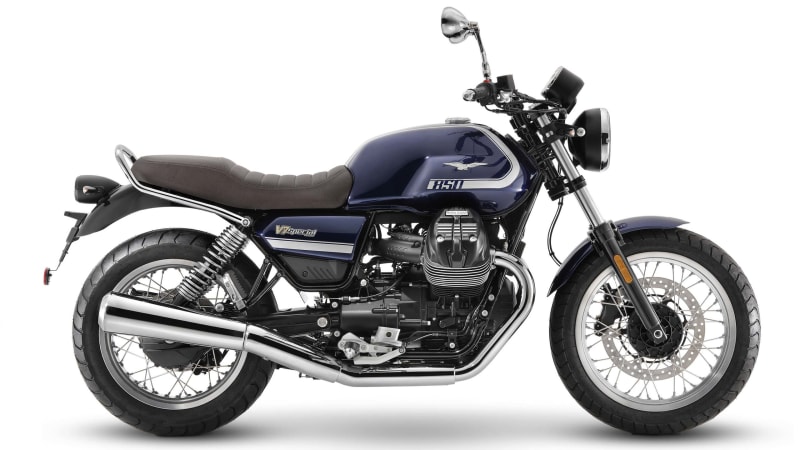 Moto Guzzi is making significant changes to the V7, its most affordable model, for the 2021 model year. It gave the bike with a bigger engine that delivers 25% more horsepower, suspension tweaks, and a subtle nip-and-tuck.

Engineers achieved the power hike by increasing the air-cooled v-twin engine’s displacement from 744 to 850 cubic centimeters. It now makes 65 horsepower at 6,800 rpm, up from 52 in the outgoing V7, and 54 pound-feet of torque at 5,000 rpm, though Moto Guzzi notes that 80% of the engine’s torque is available at 3,000 rpm.

Keeping the extra power in check required fitting a wider rear wheel and stronger rear shocks provided by Kayaba. Visor Down learned the new hardware is bolted to an updated frame that improves stability without sacrificing handling. Visually, the new V7 stands out with redesigned side panels and a shorter rear mudguard.

Technology is permeating the motorcycle segment, too, but Moto Guzzi isn’t forcing it on riders. It’s letting buyers decide whether they want a pair of analog gauges, or a digital instrument cluster that consists of a single gauge.

Riders will have two models named Stone and Special, respectively, to choose from. Stone corresponds to a more modern-looking bike offered in three satin-finish colors, while Special denotes a more classic look that’s a tribute to earlier V7s. Both will be sold in the United States, but pricing information hasn’t been announced yet.