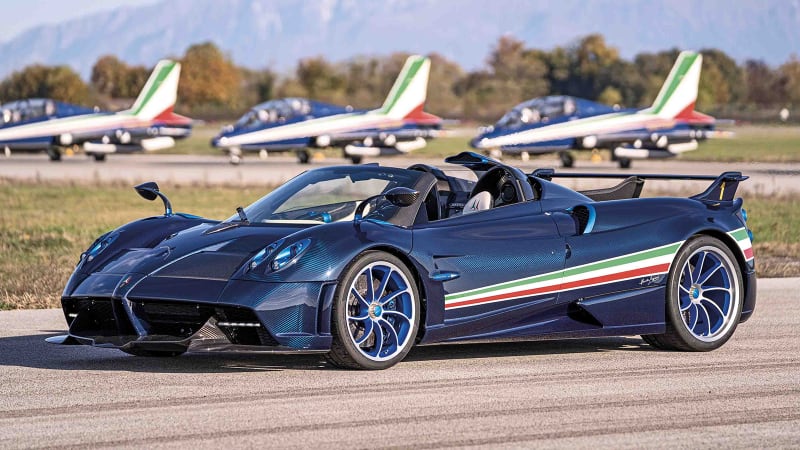 The Italian Air Force’s aerobatic team, known as the Frecce Tricolori, is celebrating its 60th anniversary next year. To celebrate, Pagani has created the Huayra Tricolore, a very limited-edition variant of the open-top Huayra supercar. Only three will be built, and each features design inspiration from the Aermacchi MB-339A P.A.N. jets flown by the Frecce Tricolori, plus performance upgrades from the Huayra Imola. It all makes for one impressive machine.

The first and most obvious connection between the Huayra and the jets that inspired it is the color scheme. It has a blue translucent carbon fiber finish with bright green, white and red stripes along the sides. Other details tying the vehicles together are the rear wing with supports modeled after the plane tail fins (also, it’s a wing), turbine-style wheels, and billet aluminum parts inside and out in a blue anodized finish. Each car gets a number representing a member of the team, too, with 0 for the team commander, 1 for the lead formation pilot, and 10 for the solo flyer. The aeronautic showpiece, though, is the pitot tube on the nose that is fully functional and measures air speed. This is then displayed on a meter in the cabin with information in knots and mach speed.

There are other changes to the Huayra Tricolore that aren’t quite as obsessed with the idea of being a land plane. The car gets a deeper front splitter and a revised front bumper with new air vents to increase intercooler efficiency. A new roof scoop is fitted for better airflow to the engine bay. The interior also gets blue and white seats with green, white and red inserts that are similar to the Zonda Tricolores built for the Frecce Tricolori’s 50th anniversary. The seats and the four-point harness buckles also feature the emblem of the aerobatic team.

Backing up the bold design are engine and chassis upgrades from the Huayra Imola track car. The engine is the same twin-turbocharged AMG-developed V12 making 829 horsepower and 811 pound-feet of torque. The stiffer chassis comes from the track car, as does the interlinked electronically controlled suspension. So in many ways it’s a roadster version of the Imola.

It also happens to be more expensive than the Imola. The price is 5.5 million Euros, which comes to $6.75 million at current exchange rates. That doesn’t include tax, either.