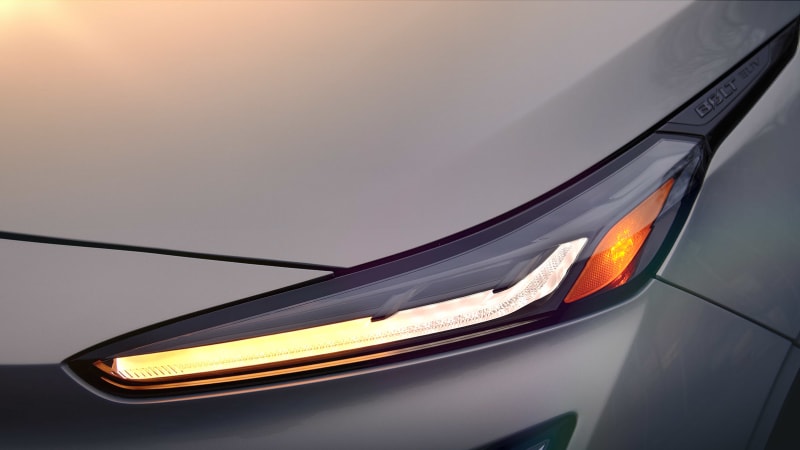 Chevrolet is preparing to introduce a bigger alternative to the electric Bolt EV named Bolt EUV. It’s not ready to unveil the model yet, but it published a photo that shows part of its front fascia for the first time.

What’s interesting is that the image reveals a unit that combines the sequential front turn signal and the LED daytime running light under the same lens. It’s positioned relatively high up on the front end at the point where the hood, the bumper, and the fender intersect, which seemingly confirms that the headlights are mounted lower, like on the current-generation Jeep Cherokee (before it received a facelift) and on several Citroën models sold across the pond. It’s a polarizing look that will mark a significant departure from Chevrolet’s current design language.

While that’s the only piece of the puzzle handed out by Chevrolet, a dark photo of its profile distributed earlier in 2020 suggests the EUV (which stands for electric utility vehicle) will be longer and taller than the Bolt while offering motorists a little bit more ground clearance. Its wheelbase will stretch three inches longer, and the extra sheet metal will give the rear occupants more leg room. Powertrain specifications remain under wraps.

Images released earlier in 2020 gave us a look at the Bolt EUV’s interior. It will be more spacious than the Bolt, and it will gain a redesigned center stack with a touchscreen that’s separated from the HVAC controls by a thin strip of shiny trim. Chevrolet confirmed the Bolt EUV will be the first EV it sells with Super Cruise, a state-of-the-art hands-free driving system inaugurated by Cadillac and slowly spreading across the General Motors portfolio.

Pelting the Bolt into crossover territory should broaden its appeal. While the current model is ostensibly marketed as a crossover, it’s more of a tall hatchback reminiscent of the people-movers that ruled the European market in the 2000s, and sales figures reflect that. 16,418 units of the Bolt found a home in the United States in 2019, meaning it was outsold by the Corvette (17,988 units) and the Spark (31,281 units), among many other models. Even the Impala —which was deemed too unpopular to keep around — handily outperformed it with 44,978 sales.

Chevrolet will release more details about the 2022 Bolt EUV in the coming months, and production is scheduled to start in the summer of 2021. Pricing hasn’t been announced, but we expect it will cost at least $40,000.