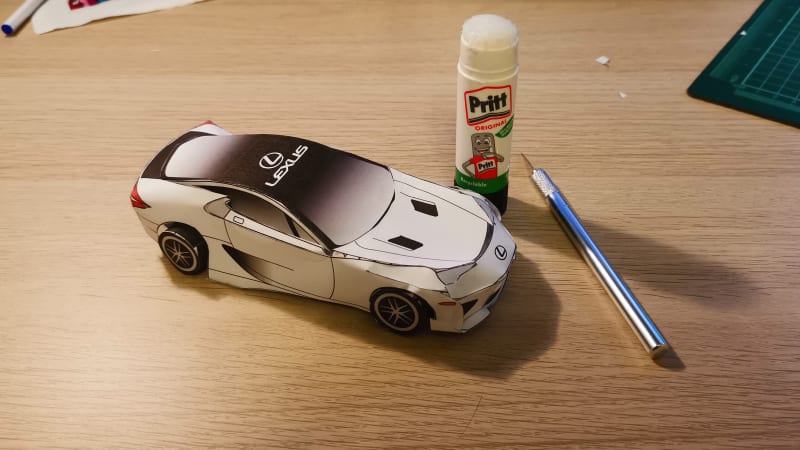 Lexus launched production of the LFA, a limited-edition supercar still venerated in 2020, in December 2010. While fans would undoubtedly love to see a second-generation model to mark the occasion, the Japanese firm is celebrating 10 years of LFA production by releasing a paper model that enthusiasts can print and build at home.

500 units of the life-sized LFA were made by hand in Japan between 2010 and 2012. The paper model will be hand-made, too, but builders need to arm themselves with scissors and glue instead of wrenches, and production isn’t limited. Anyone can print out the templates (which are included in our gallery) and put the car together.

Lexus released four templates: one is blue, one is orange, one is white and one wears the colors of the Gazoo Racing team. Building each car is fairly straight-forward, and basic instructions are shown in our gallery. Lexus estimates assembly takes about an hour and a half, and it suggests folding the paper against a ruler to create a perfectly straight edge. It also notes builders should print out each template on A3 paper to make a bigger car.

Full building instructions are published on the Lexus United Kingdom media site. Folks who make their own LFA at home are encouraged to share their creation by tagging the brand on its social media channels. We’ll award bonus points to anyone that manages to make a paper version of the naturally-aspirated 4.8-liter V10 engine.

As for a second-generation model, our advice is not to hold your breath. Lexus is focusing on other projects, like developing electric powertrains, and it doesn’t sound like a follow-up to the LFA is high on the company’s list of priorities. It hasn’t been ruled out, however. “I love it, but we need your help. We need strong requests for a new LFA from the media. This can help us proceed,” vice president Koji Sato told British magazine Autocar in 2019.