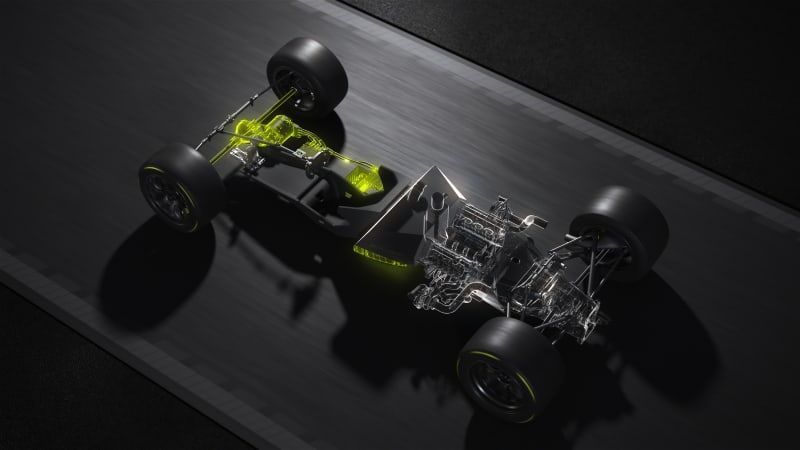 Peugeot will return to the FIA’s World Endurance Championship (WEC) after a decade-long hiatus with a hybrid race car developed jointly with oil company Total, one of its historic partners. It released preliminary specifications about the new 939-horsepower gasoline-electric drivetrain that will power the race car.

Designing a gasoline-electric powertrain capable of surviving — let alone winning — one of the world’s most challenging races requires balancing weight and performance. Peugeot chose to build the system around a twin-turbocharged, 2.6-liter V6 developed specifically for racing and positioned just ahead of the rear axle. On its own, the 90-degree six sends 680 horsepower to the rear wheels via a seven-speed sequential transmission.

Up front, a 268-horsepower electric motor zaps the front wheels into motion. It’s linked to a 900-volt battery pack positioned between the lone, mid-mounted driver’s seat and the aforementioned V6. Peugeot’s powertrain delivers through-the-road all-wheel-drive, meaning there is no mechanical connection between the axles.

Pilots won’t have 939 horses to play with during races like the 24 Hours of Le Mans, because FIA regulations cap each car’s output at 670 horsepower (500 kilowatts). Peugeot explained that, to comply with the norms, it will program the electric motor to stay off below 75 mph. It will also limit the V6’s output to 408 horsepower, and restrict the motor’s power depending on the battery’s state of charge. In other words, what you’ll see during races held around the world will only be a fraction of what the drivetrain is capable of delivering.

Peugeot and Total will continue fine-tuning the drivetrain on a test bench and on a simulator through the first half of 2021, and will put prototypes through their paces on the track at the end of the year. The Paris-based firm — which is busy merging with Fiat-Chrysler Automobiles (FCA) — will take its spot on the starting grid during the 2022 WEC season. It will compete in the Hypercar category against Toyota and Glickenhaus, among others.

Peugeot is more often associated with cheap and cheerful econoboxes, like the 108 hatchback, than with championship-winning machines, but its trophy case is fuller than many realize. It won the Paris-Dakar (back when it still started in Paris and still ended in Dakar) four consecutive times starting in 1987 with highly-modified variants of the 205 and the 405, and again from 2016 to 2018. Going back to the pavement, its 905 took first in the 24 Hours of Le Mans in 1992 and 1993, and its diesel-powered 908 took first and second place in 2009.