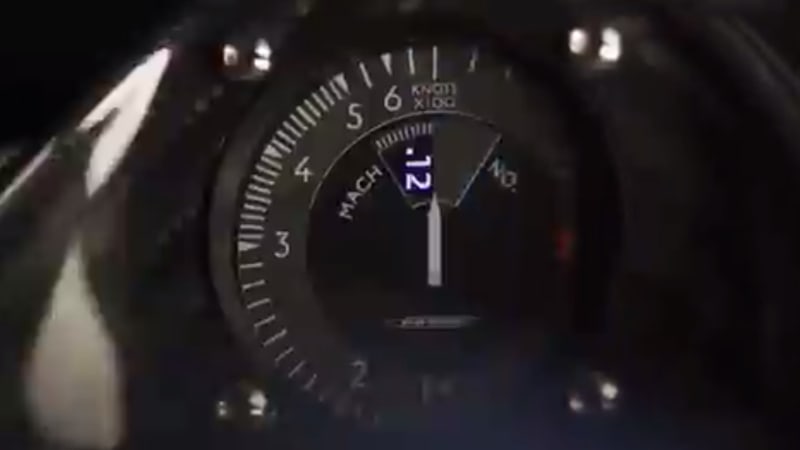 Pagani has tweeted a mysterious video showing what seems to be a new supercar. Details are scant, but like many of its creations there appears to be a strong aeronautical theme.

The first thing we see is a blue device with the words “Airflow Sensor. Handle with Care” etched below it in a nice serif font. Presumably, it’s not the typical mass airflow sensor throwing a check engine code from your old Ford Escape’s intake. In fact, it looks like one of the various sensor probes you’ll find on airplanes and even Formula One race cars. It’s also mounted to a big piece of blue tinted carbon fiber, which is probably the car’s hood or roof.

Next, a gauge flashes before us. It looks like a speedometer, except velocity is measured not in miles or kilometers per hour, but in knots, indicated by an analog dial and red needle on the outside, and the speed of sound in a vertically oriented digital readout on the inside. Also known as mach speed, or 767.269 mph, seems like quite a quick pace for a road car, but you’ll notice the speed features a little decimal point. In the trailer, the car accelerates to Mach 0.12, an easily attainable 92 mph. Of course, that’s still just a fraction of the speed other Paganis have achieved, like the Huayra Imola’s 240 mph to take just one example.

Notably, the engine is a growling internal combustion unit. There have been rumors of an electric Pagani but this isn’t it. The Huayra replacement was supposed to have debuted at the Geneva Motor Show in March for a 2021 arrival, but the event was canceled at the outset of the COVID-19 pandemic. Reports say the successor will have an AMG-built V12 like the Huayra, with electric power to come later.

Accompanying the short video tweet is a cryptic message: “On December 17th, we will celebrate Air Speed. Stay with us and hold on tight!” It should be pointed out that Pagani, like Volkswagen, has had a history of using wind-themed names for its cars. Zonda refers to a warm and dry wind that blows down from the Andes over the pampas of Argentina. Huayra was a god of wind worshiped by the native people of what is today South America.

While we aren’t looking forward to having to convert fractions of mach to mph while accelerating in a multi-million dollar supercar, we suspect buyers won’t worry too much and instead enjoy the novelty.