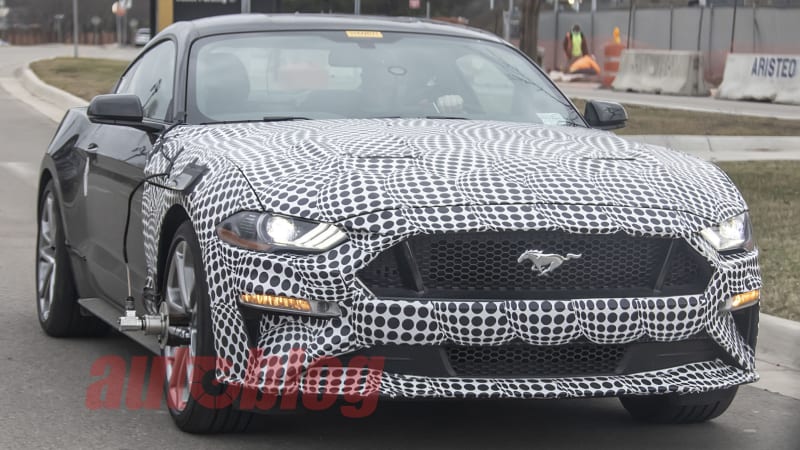 A mysterious Ford Mustang GT mule has been spotted near the company’s Dearborn development facilities, sparking a fresh round of speculation as to what the Blue Oval has in store for its pony car. If you thought we’d get out of 2020 without yet another automotive mystery, well, guess again.

If the first thing that springs to mind from viewing these shots is “Mach 1, part deux,” you’re not alone. When we first saw that variant on the street a year ago, it looked a lot like the prototype in these photos. Upon closer inspection, however, we can see that there are some key differences that deepen the mystery surrounding this mule.

For starters, the Mach 1 was clearly based on a performance-spec Mustang GT. While this prototype is at least based on a V8 model, the square wheel and tire setup along with all-season tires point to a fairly basic spec. The lug-mounted sensors visible in some of the photos suggest that Ford is testing either powertrain or brake tweaks.

Rumors of an all-wheel drive Mustang have been swirling for years. As we’ve pointed out before, seeing an all-wheel-drive variant of the current-generation Mustang (pictured) is extremely unlikely. If it receives the green light, the layout would almost certainly be offered on the next-generation model, which is due out for the 2023 model year.

There are multiple other possibilities on the powertrain front, of course. Anything from the long-rumored hybrid (rumors of which trailed off after the Mustang Mach-E introduction) to the introduction of engines utilized in Ford’s other rear-wheel-drive models could be on the table. Then again, it could be something as simple as a braking system upgrade, which could explain both an altered fascia and the corner-mounted sensors just as well as any powertrain modification could.

At this point, we still expect 2022 to be the last year for the current-gen Mustang, so this could be a mule for just about anything. We’d like to see some full-blown prototypes of its eventual successor, but we’ll have to settle for this type of thing for now, it seems.