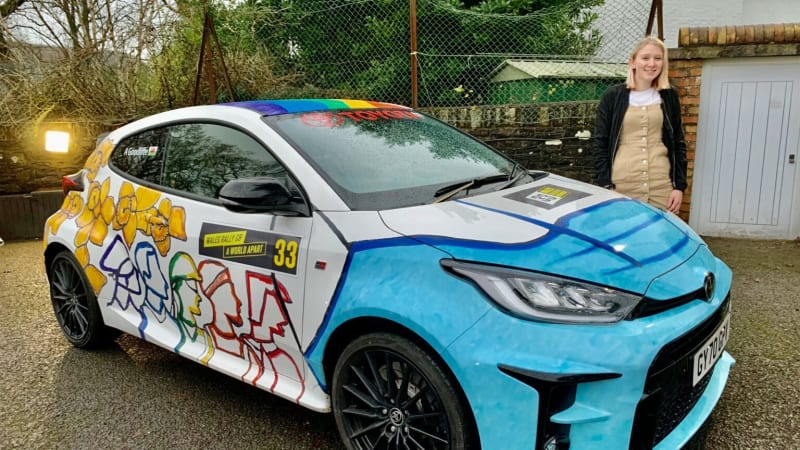 To close out an insane year, Toyota U.K. has pulled the wraps off a GR Yaris that pays tribute to essential workers on the front lines of the COVID-19 pandemic. Revealed at the WRC season closer in Monza, Italy, the car is decorated with a mural designed by a 16-year-old high school student as part of a “Design a Rally Car Livery” art contest sponsored by Toyota and Wales Rally Great Britain.

The car, you may notice, is wearing the unofficial symbol of 2020 — a face mask with elastic straps wrapped around the side mirrors. Along its sides are profiles of a nurse, teacher, construction worker, shopkeeper and a police officer, representing professions that have kept the world turning during the health crisis.

Contest winner Alice Goodliffe, a student at Ysgol Uwchradd secondary school in Plasmawr, Wales, is a WRC fan. “I’m a big rally fan and was absolutely gutted when this year’s Wales Rally GB was cancelled [due to COVID-19],” she said. That’s why her design incorporates daffodils, the official flower of Wales. Goodliffe added the rainbow on the roof “as a sign of hope during these tough times.”

To tie up the Wales connection, going into the final WRC round of the year, Welsh driver Elfyn Evans held the points lead for the Toyota Gazoo Racing WRC team. Unfortunately, he was beaten by teammate Sébastien Ogier, who took the Drivers’ Championship in the final points count, while Hyundai won the Manufacturers’ Championship overall.

Nevertheless, Toyota’s 257-horsepower (in U.K. spec) homologation hot hatch has served as a highlight for car enthusiasts in an otherwise bleak year, and a celebration of essential workers caps off 2020 perfectly.