Gen. Chuck Yeager came to Detroit in 1983 at the height of “Right Stuff” fever to entertain Detroit’s automotive advertising hoi polloi for AC Delco, and he was the toast of the evening. His stories were wild, and the line for autographs afterwards was long. The crowd was in thrall of his West-by-God-Virginia accent and his famous blue fighter pilot eyes.

Eventually, I was the last human in the autograph line to reach the first human to fly faster than the speed of sound. I went in for the general’s handshake and held on long enough to convince him I could bring him a prototype 1986 Corvette roadster to test drive in Northern California well before his upcoming stint driving a Corvette as the Indy 500 pace car. (He drove pace cars in both 1986 and 1988.) When he left that evening, I had his phone number clutched in my hand.

Chevy public relations agreed to the loan of a roadster prototype for my Automobile Magazine interview with the general. I hired one of our good Brit photographers, flew to Arizona, drove to the GM proving grounds to fetch the yellow prototype roadster, and finally carried on to meet Yeager at his home in Grass Valley, California, for his test drive.

A month had gone by without contact. The general had yet to return calls confirming my visit with the Corvette. Still, there I was in a yellow Corvette roadster, the sky was blue, and Highway 49 was a crazy beast of a road. No turning back.

I took that as an invitation.

We found the general down by the garage, hidden in the Ponderosa pines, tinkering on his fleet of old and new Chevys including one green ’73 Chevy truck with white fenders and the bumper sticker: “Cowgirls: Try ‘em, you’ll like ‘em.” And another: “We’re insured by Smith & Wesson.” He opened the hood. “I still do the work on this truck. I love it.”

For a guy known for speed, he was in no hurry. I was watching the day slip away as we chatted, and we weren’t driving yet.

Then something prompted him to say,  “Hey! Why don’t you go on up to the house and have Glennis give you a photo of the F-15?”

How cool! I walked up the hill and knocked on the door. The door opened. “What do you want?!” His wife fairly shouted me off her steps. This was much worse than calling on the phone. I told her the general had sent me. She closed the door with gusto. I decided it was best to wait. Yep. Her arm shot out, I took the photo from her without a word, the door closed once more with feeling, and I trudged down the hill, my prize in hand, my pride slightly dented.

Finally, the general took the reins of the Corvette. As we tooled through little Grass Valley, home to the Yeagers since 1973 and home to Glennis’ family for three generations back, Yeager casually reset the clock in the dash. (Of course he did.)

I asked if he was a good driver.

“Who me? Yeah. Most test pilots are a helluva lot more careful than the average driver. Hell, one mistake is all you’re allowed up there.

I faced the door again with dread and knocked. “WHAT?!” Glennis shouted.

“My first real performance car was a Pontiac Firebird 400, a 1968. That was a beautiful car. I took it to Germany and drove it on the autobahn. It would go about 138, wide open. I took it on trips all over. I sold it to a Pakistani when I moved back in 1973. I’ve stuck with Chevy trucks ever since. I never owned a foreign car, and I’m just enough of a redneck that I probably never will, either.”

He nudged my arm like he’d pulled one over on GM and admitted, with eyes crinkled in glee, that he had set up the pace car deal himself. “I heard they were going to use a Corvette convertible as a pace car this year. Well, I do AC Delco commercials, I do seatbelt commercials for GM, and I own a Corvette. What would be more natural than to have me drive the pace car?

“I was talking to the race drivers, and I said, ‘If you guys will let me take those first three laps, I’ll split the money with you before they shoot me off the track.’”

As we packed up for the long drive back to Arizona, the general had a sudden thought. It was time for another publicity photo. “Hey! Why don’t you go on up to the house and have Glennis give you the photo with me and the F-20?”

I faced the door again with dread and knocked. “WHAT?!” Glennis shouted, and I squeaked out an apology before throwing the general under the bus. “He made me ask,” I whimpered.

She slammed the door shut. I knew the drill and waited until it opened and the photo was thrust out.

Yeager was tickled to sign the print. This one was of him in flight gear in front of the wild F-20 Tigershark. He once said that of all the airplanes in the world that he’d flown, the F-20 Tgigershark was his favorite.

It’s my prize possession from the fastest man on earth. 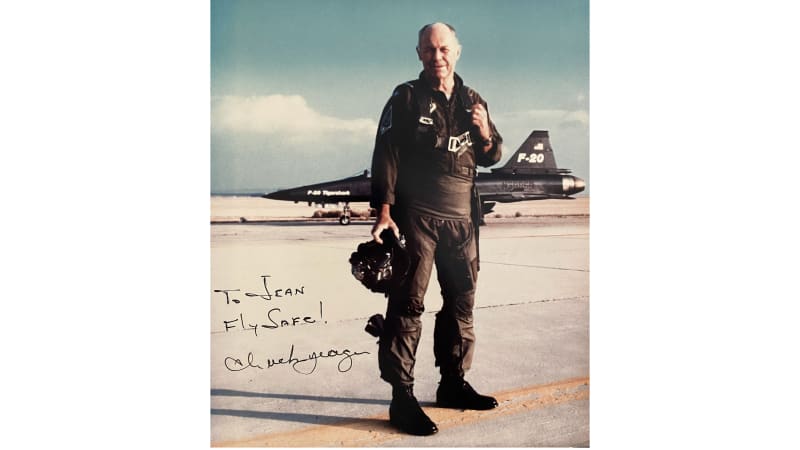 Jean Jennings has been writing about cars for more than 30 years, after stints as a taxicab driver and as a mechanic in the Chrysler Proving Grounds Impact Lab. She was a staff writer at Car and Driver magazine, the first executive editor and former president and editor-in-chief of Automobile Magazine, the founder of the blog Jean Knows Cars and former automotive correspondent for Good Morning America. She has lifetime awards from both the Motor Press Guild and the New England Motor Press Association.