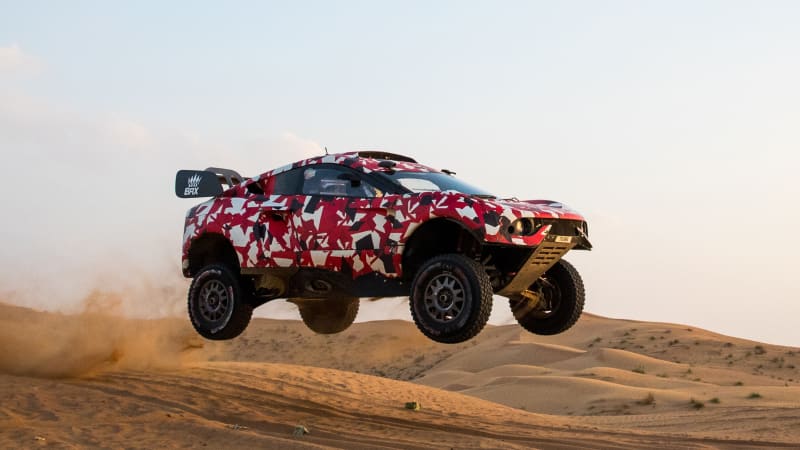 The combination of forces behind this Dakar Rally car is formidable. We’ve known this project was coming, but now we get to see it in real-life photos. Prodrive, Ian Callum and Sebastian Loeb make up the star-studded lineup behind the car. As you’d expect, Prodrive engineered it; Callum penned it, and Loeb is going to drive it in the 2021 Dakar Rally.

The organizations are going under the name Bahrain Raid Xtreme, and the car is called the Prodrive BRX T1. Its BRX acronym is self-explanatory, and the T1 refers to the class it’s competing in — T1 is the top level class at the Dakar Rally. Those photos already hint at epic things to come. Perhaps Ian Callum should take on more rally car and off-road designs, because this one looks superb.

As for the car itself, Prodrive is using Ford’s 3.5-liter twin-turbo V6 to propel it forward. It’s making 400 horsepower and 516 pound-feet of torque in this application. Loeb will shift it via a six-speed sequential gearbox that sends power to all four wheels through front, center and rear differentials.

The chassis is a high strength steel tubular structure covered in carbon fiber body panels. It measures 177 inches in length and about 78 inches in width. That means its footprint is near that of a Lamborghini Huracan EVO, but a little bigger in both directions (especially upward). It’s a heavy thing, too, coming in at 4,079 pounds for a dry weight. But keep in mind the territory this vehicle has to pass through. It requires an incredible amount of strength and durability to even complete the Dakar Rally, let alone win.

The rally begins in January, so watch out for news of how it performs. It’ll need to traverse about 3,100 miles throughout the kingdom of Saudi Arabia in 12 stages. The BRX team has tested for about a month at this point in Dubai. They have three more weeks, then it’s go-time.