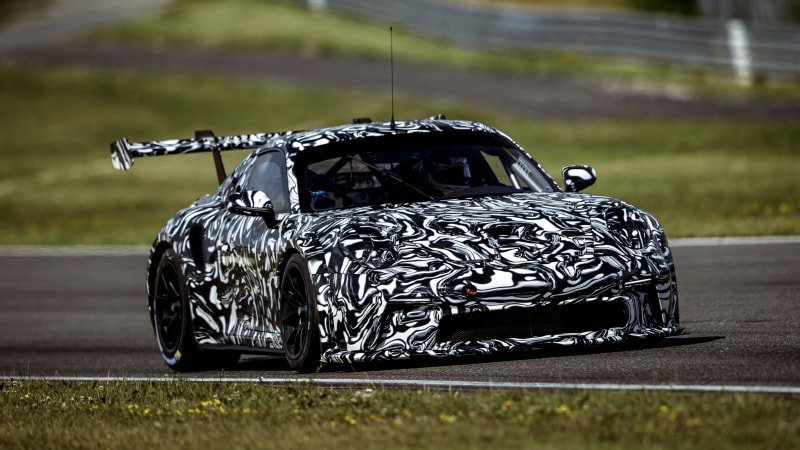 Porsche is about to unveil the first track-only variant of the eighth-generation 911. Built to GT3 specifications, it was developed for privateers seeking a turn-key, factory-built racer that needs only a driver and fuel to compete.

Development work began in 2018, and Porsche engineers started the project by chatting with the teams who have raced previous Cup cars around the world. Armed with that insight, it chose to redesign several hundred components instead of pulling them out of its parts bin, and it began testing the first prototypes in 2019. One car was sent to Porsche’s test track near Stuttgart, while another was fine-tuned in a wind tunnel.

Testing continued on a number of race tracks around the globe, including Monza in Italy. Interestingly, Porsche examined how the different mechanical components perform when the car is being driven flat-out, but it also looked at what the GT3 Cup is like to run and service during a race, even when things go completely wrong.

“The idea was to simulate an entire race weekend from our customers’ perspective, and to use the vehicle as the teams would – including deliberately inciting problems, incorrect operations, and damage scenarios,” explained product manager Christoph Werner. “We came across minor issues that we could rectify.”

Although it’s still swathed in camouflage, which cleverly incorporates the shape of some of the world’s most famous race tracks, the 911 GT3 Cup can’t hide its massive rear wing. It also wears a specific front end with a wide air dam and ducts that cool the front brakes. There’s also what looks like a NACA duct cut into the front decklid, plus a pair of vents in front of the rear wheels that channel cooling air to the flat-six engine.

“It has once again been improved in all areas, from the engine and suspension to the aerodynamics and brakes, right through to the electronics and ergonomics,” promised Martijn Meijs, Porsche’s technical manager.

Full details about the new 911 GT3 Cup will be announced on December 12. It will start racing in 2021. Some of the hardware hidden under the body will find its way into the street-legal 911 GT3 that’s due out soon.

Porsche explained it still sees a significant demand for track-ready 911s from racers around the world. It built 1,410 units of the last-generation Cup car, including 673 based on the 991.1 and 737 based on the 991.2.