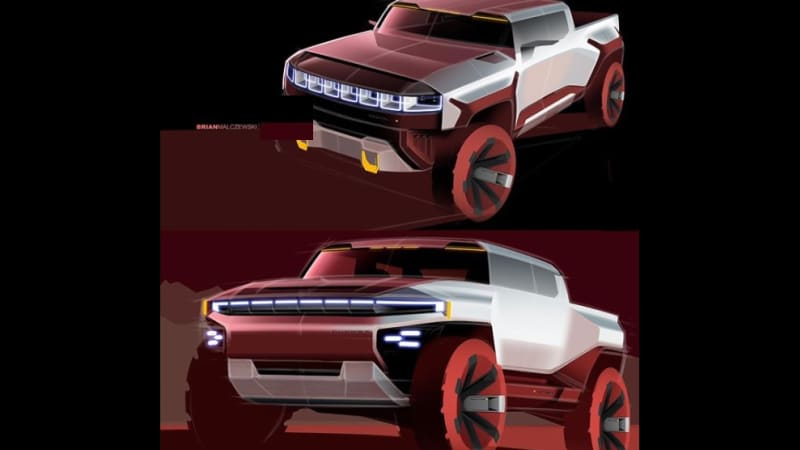 Excitement filled the room when GMC asked its designers to resurrect the Hummer in April 2019, but a tinge of uneasiness permeated the department after executives locked in an early 2020 unveiling date. Luckily, stylists knew what they wanted early on in the development phase, and preliminary design sketches give us a fascinating look at how they shaped the electric off-roader that ended up making its global debut online in October 2020.

Hummer, the brand, unceremoniously shut down in 2010 after General Motors failed to sell it to the Chinese, but its design DNA was so strong that stylists were able to pick up where their predecessors left off. All of the sketches published on Instagram by the official General Motors Design account show a boxy truck with a tall front end, a short windshield, and a generous amount of ground clearance. These styling cues trace their roots to the AM General Humvee that entered production in 1984 and made its combat debut when the United States invaded Panama in 1989. Even the wildest drawings still depict a pickup that’s immediately recognizable as a Hummer.

Most of the early design sketches wear some variation of the seven-slot grille that characterized Hummer’s production models; it’s a styling cue that hints at a heritage shared with Jeep under the American Motors Corporation (AMC) umbrella. Oddly, none wear the round headlights seen on the H2, the H3, and the HX concept that nearly became the H4. Was GMC afraid that its Hummer would end up looking too much like a Jeep? And, at least one sketch shows a fold-down windshield, a feature that will not make it to the assembly line.

Sketches never reach production without modifications made in the name of packaging and safety concerns, and the Hummer is no exception, but stylists did a good job of reinventing the brand’s design language without copying or erasing the past. If the company had stuck around long enough to make a second- and a third-generation H2, odds are it would look a lot like the GMC-branded model that will enter production in a year.

GMC remains on track to start 2022 Hummer deliveries in late 2021, though it told Green Car Reports that it still hasn’t built a fully functional prototype yet. When it arrives, this outdoorsy pickup will land in a burgeoning segment of the truck market that numerous models (including the Rivian R1T and Ford’s electric F-150) will also call home. Pricing will initially start at $112,595, though cheaper models will join the lineup later in the production run.