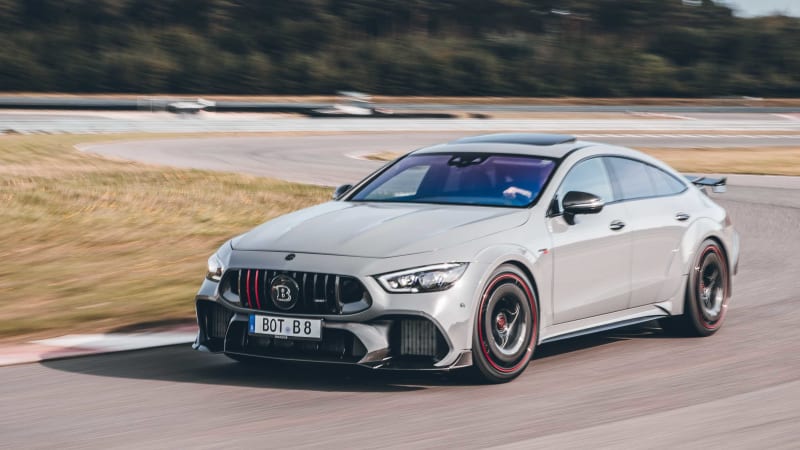 With a 3.1-second zero-to-60-mph time, the GT 63 S is one of the quickest members of the Mercedes-AMG lineup. German tuner Brabus saw room for improvement, so it added the sedan to its Rocket range of supercars by making it considerably more powerful, a little bit lower, and much louder, both audibly and visually.

Limited to 10 numbered units worldwide, as its name implies, the Rocket 900 One of 10 is impossible to miss thanks in part to a full body kit fine-tuned in a wind tunnel and made with carbon fiber to keep weight in check. It’s certainly not subtle, but no part of it was added simply to turn heads. Brabus noted that the air intakes chiseled into the grille are needed in order to feed air to the bigger engine, and that the front splitter reduces the front axle’s tendency to lift at high speeds; it’s not a plane, after all, even it can most likely outsprint one from a stop.

An air suspension reduces the 900’s ride height by about an inch in the two driving modes, which are called Comfort and Sport, respectively. Special attention was given to the wheels, which are exceptionally wide to improve high-speed stability and fitted with carbon fiber aero discs. Finally, all of the chrome exterior trim was painted in the same color as the body, and Brabus emblems replace the three-pointed star all around.

More body-colored parts are found inside; 215, to be precise, ranging from switches to bezels. Brabus also added diamond-stitched upholstery, though it encourages customers to work with its stylists and configure the cabin to their exact specifications. What you see in the images above isn’t necessarily what you’ll get if you order one.

Whether you love or hate the visual modifications, it’s difficult to deny that Brabus takes the tuning process a step further than most of its competitors. It engineered a 4.5-liter version of the standard 4.0-liter V8 by increasing the stroke and the bore. It also installed a billet crankshaft, billet connecting rods, and forged pistons.

“As we all know, there is nothing to replace displacement other than more displacement,” the firm points out.

That’s just the tip of the iceberg. The list of modifications made to the engine also includes a pair of beefier turbochargers, high-pressure pumps in the fuel delivery system, a ram-air intake system, and a recalibrated ECU. It’s still bolted to a nine-speed automatic transmission that spins the four wheels via the 4Matic+ system.

All told, the eight-cylinder develops 900 horsepower and 922 pound-feet of torque, though the latter figure is electronically limited to 775 to ensure the Rocket doesn’t jettison part of its driveline under heavy acceleration. Getting to 62 mph from a stop takes 2.8 seconds, and reaching 186 mph requires 23.9 seconds. Brabus limited the top speed to 205 mph; the 4,673-pound Rocket could go faster, but that’s all the tires can handle.

Modifications don’t come cheap, and Brabus priced the Rocket 900 One of 10 at 435,800 euros, a figure which converts to approximately $514,000, before miscellaneous taxes and options enter the equation. Put another way, it’s about $352,000 (roughly the cost of a Rolls-Royce Cullinan) more expensive than the standard GT 63 S.