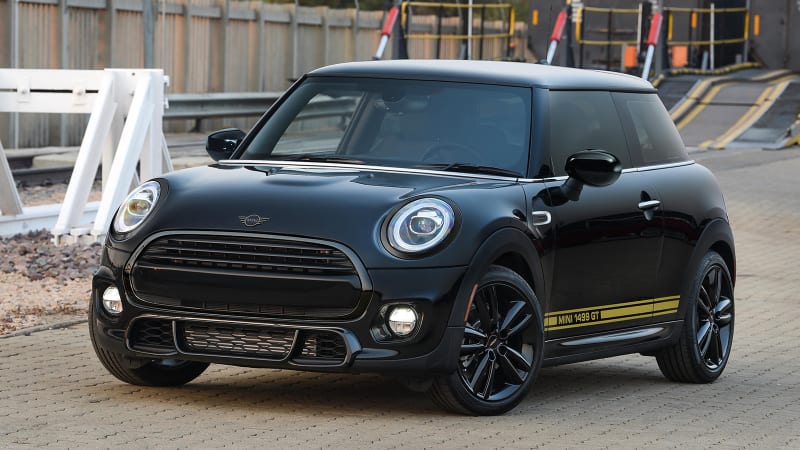 When you think of sporty Minis, you probably think of the Mini Cooper S and John Cooper Works models with their (relatively) large turbo four-cylinder engines. But with the 2021 Mini Cooper 1499 GT special edition, Mini is trying to bring a dash of sportiness to the base three-cylinder model.

The car’s styling and name is inspired by the Mini 1275 GT that was introduced way back in 1969 as a more affordable, but still sporty, alternative to the Cooper S. The number represented the engine displacement in cubic centimeters, as it does on the new 1499 GT. The black paint scheme with gold side stripes is the inverse of the launch color for the 1275 GT. Further adding to its athletic looks are black badges and trim, 17-inch wheels, and John Cooper Works-style front and rear bumpers, side skirts and hatch spoiler.

The interior also picks up an array of John Cooper Works parts including the steering wheel, seats, shifter and pedals. In front of the steering wheel is the digital instrument cluster from the John Cooper Works GP. Mini also adds a few equipment upgrades found in upper-trim Cooper Hardtops such as dual-zone automatic climate control, automatic lights, automatic wipers, a 6.5-inch infotainment screen and navigation.

What the 1499 GT doesn’t get are any performance upgrades. The turbocharged 1.5-liter three-cylinder makes the same 134 horsepower and 162 pound-feet of torque as its Cooper siblings. It comes standard with a six-speed manual transmission, and a seven-speed dual-clutch automatic is available as an option. The suspension is unchanged as well. Still, we’ve found that the base three-cylinder Mini is a thoroughly entertaining car to drive.

To pick up one of these special edition Minis, you’ll need to fork over $27,890. That’s about on par with the Mini Cooper Signature trim, so it isn’t completely unreasonable to pay that much for a three-cylinder Mini. But buyers looking for a sporty Mini might be tempted to skip over the 1499 GT for the more powerful Mini Cooper S, which starts slightly less at $27,250.