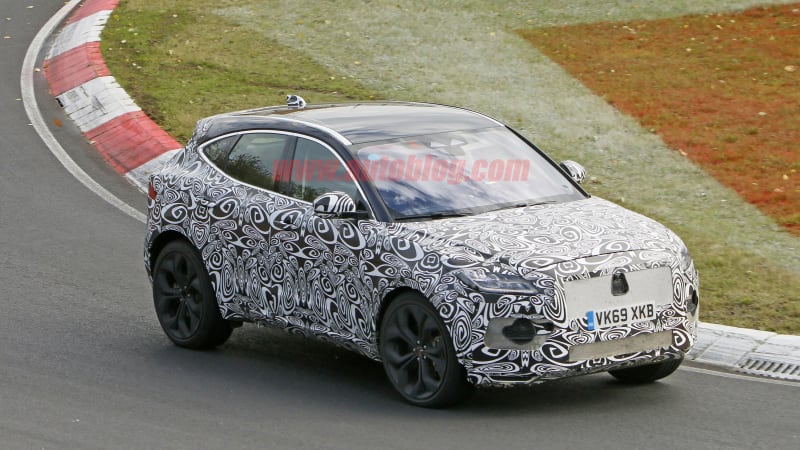 We just spied a Jaguar E-Pace lapping the Nürburgring covered in camouflage from front to back. Jaguar released the first E-Pace as a 2018 model year, so we’re fast approaching what will be the model’s first light refresh.

Things don’t appear to be drastically changing from an exterior design perspective. The same shapes, cutouts and vents are all visible on the rear fascia and hatch. Even the slick taillights look largely the same as the E-Pace that’s on sale now.

If there’s going to be some change in this crossover, we suspect it’ll be up front where the coverings change from skin-tight camo print to pieces of fabric that completely disguise what’s underneath. Two cutouts in the fabric are visible on the side air intakes, presumably allowing air to pass through to keep the E-Pace’s vitals cool on the Nürburgring. Possible changes include a new grille and front bumper design, most likely mimicking the lightly massaged F-Pace front end design.

Seeing that Jaguar spent most of its time upgrading the F-Pace’s interior, there’s a good chance Jaguar is doing the same with the E-Pace. It’s definitely the area that requires the most attention, especially now that the F-Pace’s interior is so handsome. We’d love to see Jaguar put as much tech and style into its small crossover, and this is its chance to do that.

Powertrain options shouldn’t depart much from what you can buy now. There’s a P250 packing a 2.0-liter turbocharged four-cylinder that’s good for 246 horsepower. The upgrade is the P300 with a more potent four-cylinder, raising output to 296 horsepower. Seeing as the recently redesigned Evoque still has no engine more powerful than the E-Pace, the Jag will likely carry over these power units, as well. If anything, the E-Pace will gain a mild-hybrid powertrain option, which could be what Jaguar is stress testing on the Nürburgring right here.

Jaguar still hasn’t announced the 2021 E-Pace, so this model could be the refresh. If they’re not as far along as we guess, it’ll certainly end up being the 2022 E-Pace. Either way, an improved E-Pace isn’t that far out.