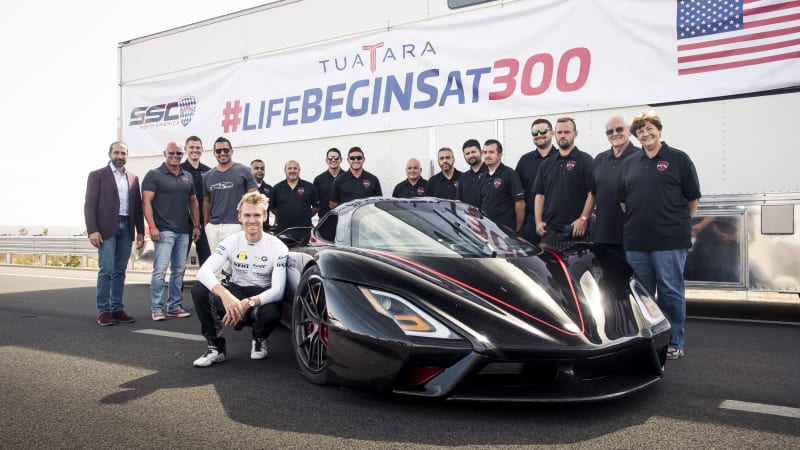 Dr. Larry Caplin is shown here with the SSC team. He’s wearing the sport coat, at far left. Standing next to him is Jerod Shelby.

Now that the SSC Tuatara has snagged the top speed record at 316 mph, it’s time for other festivities. The owner of the Tuatara, Dr. Larry Caplin, is now on a mission to use the car’s time in the spotlight to raise $316,000 through his charity: CF Charities Foundation. The charity benefits community programs and services for children, helps out underserved schools, and funds college scholarships for first-generation students and aid military families.

We chatted with Dr. Caplin (who also owns the last SSC Ultimate Aero ever made) about his car, the record run and his charity.

“They asked me if I wanted the first car,” Caplin told us as he explained how he ended up with the one and only production Tuatara in existence. “We both agreed that we would use my car to set the world record.”

In return for SSC being able to use his car for the record run, Caplin got to work directly with SSC’s designers and engineers on the car’s interior design. Caplin was inside the project with SSC a couple of years ago, shaping the styling and design to his own preferences.

He also gets to be the guy with the fastest car in the world, which is pretty damn cool on its own. Caplin jumped at the opportunity for his Tuatara to be the one used by Oliver Webb to set the record, too. He’s not one of those supercar collectors who keep their cars locked up.

He hasn’t had his Tuatara up anywhere near where Webb took it to outside Pahrump, Nevada, but he has plans to push the envelope with it soon.

Caplin, as he’s doing now, likes to use his cars for charitable events, bringing them out to events, shows and other related things.

“I think it’s important for people who have collections like this to find a purpose other than it being a collection for themselves,” Caplin says. “I think it’s a responsibility to share it but also find value in it that far exceeds the cars, and I would hope that more people would do that.”

If you want to donate to the charity inspired by the Tuatara’s record run, you can do so on CF Charities’ website.

Here’s a Philadelphia TV station interview with Caplin from earlier this year when he unveiled the Tuatara at his hometown Philadelphia Auto Show: