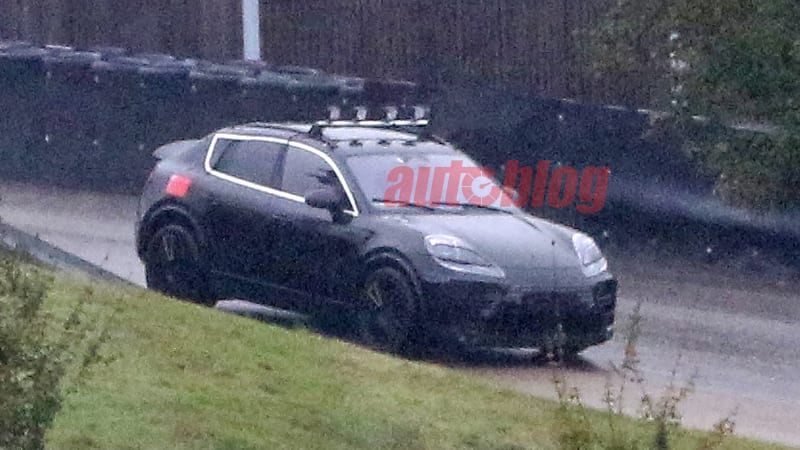 Roughly a year and a half ago, Porsche made the announcement that the next-generation Porsche Macan crossover would go all-electric; a big deal, considering that it’s the company’s best-seller. Now we get our first look at the new Macan, thanks to one of our spy photographers. Not only does it appear to borrow styling cues from its electric forebear, the Taycan, it also seems to be getting a coupe-like variant.

Despite the grainy images and moderate camouflage, we can make out some key details of the new Macan. At the front, the headlights are clearly based on those from the Taycan. They’re more rectangular than the lights on other Porsches, and they’re fairly short. The front bumper seems to have much less grille area than that of the current Macan, which makes sense since this new model is electric. From the side, we can see that this prototype seems to have a fastback shape that suggests the new Macan will get a coupe body style. This is supported by the pop-up spoiler at the very end of the crossover. Capping off the rear seem to be more slender taillights. We can’t tell if they’re joined by a section across the hatch, but it’s a likely feature based on recent Porsches. There also appear to be tailpipes, but they’re almost certainly decoys.

Underpinning this new Macan is a new electric platform called PPE (Premium Platform Electric, not personal protective equipment). It will be used on future Porsche and Audi models, but the Macan is seemingly the first to use it. According to a report from last year, the first models will be the high-performance Turbo and Turbo S trims (yes, Porsche is committed to this naming scheme for its EVs). The Turbo S may even have a peak, overboost output of 700 horsepower, which seems quite close to the Taycan models, even if it leaves a 50 horsepower buffer to the Taycan Turbo S in overboost mode. We also expect the electric Macan to have standard all-wheel drive courtesy of dual electric motors. The new model should be revealed sometime next year, and the current model will reportedly be sold alongside for a few years for people who aren’t ready to make the switch to electric power.