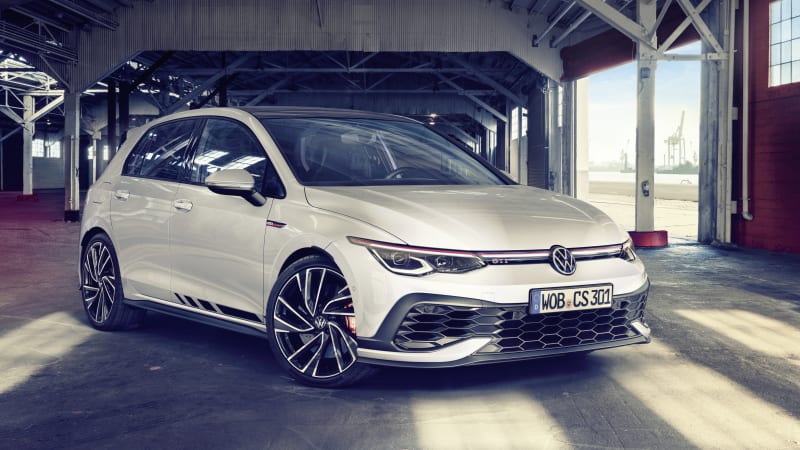 Lifting the hood reveals an evolution of the regular GTI’s 2.0-liter four-cylinder engine that’s turbocharged to 296 horsepower and 295 pound-feet of torque. These numbers represent a significant increase compared to the 2022 GTI, which delivers 242 horses and 273 pound-feet of twist, and they even exceed the seventh-generation Golf R’s outputs (288 and 280, respectively). And yet, the turbo four spins the front wheels only. Power travels through a seven-speed dual-clutch automatic transmission and a locking differential before reaching the pavement.

Volkswagen pegged the GTI Clubsport at the intersection of street cars and race cars, which is why engineers created a model-specific driving profile called Nürburgring. It alters a number of parameters to make the hatchback as quick as possible around the Green Hell. Its lap time hasn’t been released, but we expect to hear a lot more about it in the coming weeks. It’s reasonable to assume that Volkswagen will try to recapture the track’s front-wheel drive record, which stands at 7:40.1 and was set by the Renault Megane R.S. Trophy R in April 2019.

Suspension modifications make the Clubsport lower than the standard GTI. While that’s one way to tell the two cars apart, it’s easier to keep an eye out for the more muscular-looking front bumper, which gains a deeper air dam, and the sizeable two-piece spoiler mounted above the rear window. Volkswagen noted the add-ons aren’t eye candy; they create the downforce required to keep the Clubsport glued to the ground. Oval exhaust tips mounted on either side of a wide air diffuser add a finishing touch to the sporty exterior design.

Built in Wolfsburg, Germany, the Volkswagen Golf GTI Clubsport will reach showrooms in the coming months, but a company spokesperson told Autoblog it will not be sold in America. Looking ahead, the Golf portfolio will grow again when the next-generation Golf R makes its debut with 4Motion all-wheel drive and over 300 horsepower. Unverified rumors claim a range-topping, 394-horsepower model will occupy the top spot in the hierarchy.