BMW introduced the first-generation 5 Series, known as the E12, in 1972, but it didn’t come to the United States until 1975, when the 530i replaced the bigger four-door Bavaria. BMW was already well known in the U.S. for the 2002, and in a country where the typical family car of the time was a poorly-built, softly-sprung land yacht, the 530i showed Americans there was a better way. Critics lauded its sensible size, gimmick-free interior, and easy-starting and smooth-running fuel-injected straight six, which drew 176 horsepower from 3.0 liters. With a four-speed transmission, it hit 60 mph in 9.7 seconds.

What really set the BMW 5 Series from other cars—including its rival Mercedes—was its outstanding road manners. Automobile did not yet exist, but our sister publication MotorTrend wrote, “When you put everything together in terms of styling, fit and finish, handling, performance, and all of those indefinable human factors, there is a totality that is pure BMW, the essence of the marque.” It was a standard that would guide the 5 Series and the BMW brand for decades.

In 1979, the 5 Series became the 528i, denoting a new 2.8-liter straight six with a catalytic converter and an oxygen sensor. Power output dropped to 169 hp, but performance and economy improved. Models sold in 1980 received a new five-speed transmission that dropped the 0-60-mph time to 7.9 seconds.

The second-generation (E28) 5 Series came to the U.S. for 1982 as the 528e. From the outside it looked a lot like the E12, though only the roof panel and door skins were shared and the new design greatly improved aerodynamics. The cabin was modernized and improved, and a new 2.7-liter inline six-cylinder delivered 121 horsepower. Efficiency was good but excitement was lacking, a problem BMW fixed with the 1983 533i, which borrowed the 181-hp 3.2-liter engine from the 6 and 7 Series. The 533i morphed into the 535i for 1985, with a new 3.5-liter 182-hp engine. BMW also added a diesel option, the 114-hp 2.4-liter 524td, which came exclusively with an automatic transmission and remained in the lineup for just two years. In 1987, the vaunted BMW M5 arrived, sharing its 256-hp 3.5-liter DOHC straight six with the M6 coupe. 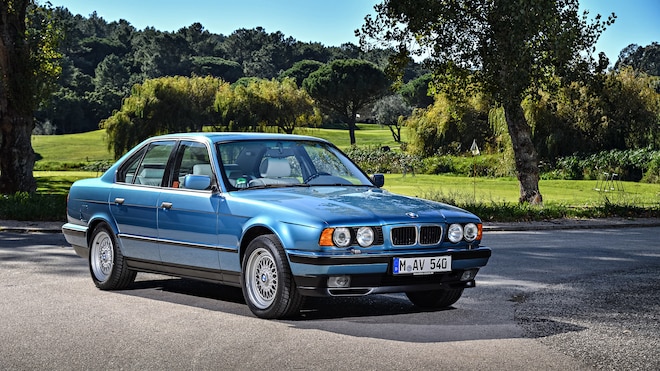 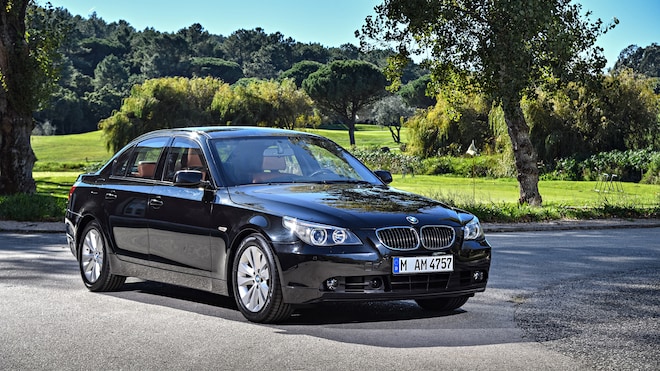 The fifth-gen E60 5 Series was new for the 2004 model year, with controversial styling and the equally controversial iDrive dial controller (this was four years before Apple claimed the ninth letter of the alphabet for the iPhone). The debut included six-cylinder 525i and 520i models and the V-8 545i. In 2005 BMW added a six-speed manual option for the V-8, but most eyes were focused on the new M5, with its 500-hp V-10 engine and seven-speed sequential-manual transmission. All-wheel drive was now available for six-cylinder models, as well as a new 530xi wagon model and a new 4.8-liter V-8 for the renamed 550i. New six-cylinder engines (and corresponding model names) arrived in 2008 with the 230-hp 528i and 300-hp twin-turbo 535i.

Before the F10 5 Series sedans made their debut for 2011, BMW added a strange new member to the 5er family: The Gran Turismo, a hatchback-crossover mashup that proved to be a slow seller. Sedans arrived in 2011 in the form of the 528i, 535i, and V-8-powered 550i. For 2012 the 528i traded its naturally-aspirated straight six for a 240-hp turbocharged four-cylinder—the first four-cylinder 5 Series offered in North America. BMW added the ActiveHybrid 5 to the lineup for 2012, and it was criticized for only offering incremental fuel economy improvement over other models.

The M5 rejoined the lineup in 2013 with a 560-hp twin-turbo V-8 and a dual-clutch transmission that replaced the herky-jerky sequential manual of the E60 M5. For 2014, BMW added a 575-hp M5 Competition model and a new turbodiesel-powered 535d sedan, powered by a 302-hp straight six. The F10 continued with minimal changes through 2016. 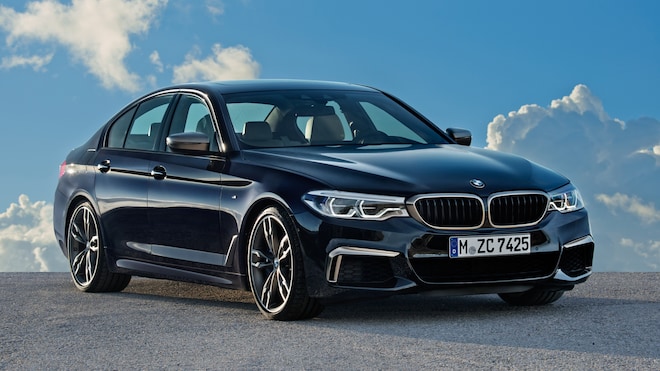 The 5 Series was the first car to use BMW’s new three-digit naming convention, with the first digit indicating the car series and the last two indicating engine displacement—more or less. BMW broke from convention with the 1982 528e, which had a 2.7 liter engine.

The “e” in the E28 528e’s name designated the “eta” engine, a Greek letter which represented efficiency. The suffix would be resurrected for the G10 530e hybrid.

The M5 is the only BMW to use a ten-cylinder engine. U.S.-spec 5s have used 4, 6, 8, and 10 cylinder engines, as well as gasoline, diesel, and hybrid powertrains.

Obviously, the most desirable 5 Series cars from a performance standpoint are the M5 models, particularly those with a manual transmission and also the V-10 powered E60 cars. The first-generation E12 and E28 5 Series’ are also of interest, because they really set the pace for the sport sedan market in America. At a time when softly-sprung Cadillacs represented the pinnacle of luxury, the BMW 5 Series showed that a car could be both aspirational and athletic. And, of course, we’re partial to the wagons, because they’re wagons.

Buying an aging BMW is not something that should be taken on lightly. These are complicated cars, and both parts and the expertise needed to install them can be expensive. If you are buying an older BMW, be sure to budget accordingly for maintenance and repairs.

Is the BMW 5 Series a good car?

Though the 3 Series is BMW’s best-known car, one could argue that the 5 set the pace for the brand, offering the luxury of the flagship 7 Series in a smaller, more affordable package. Older 5 Series cars are among the best big sedans to drive, though some critics have argued that the F10 and G10 cars don’t have the same athletic feel as previous 5 Series generations. Keep in mind that BMWs can be expensive to maintain and service, so while a new 5 is a great bet, older models should be approached with caution.

Depends on your priorities. If you are looking for economy, the 528i will be cheaper to buy and fuel. If you are interested in performance, the 535i will give you the power you want.

How long will a BMW 5 Series last?

Any car will last forever if properly maintained, and BMWs are built for the long haul—however they are complicated cars and prone to electrical maladies. BMWs can return hundreds of thousands of miles of happy ownership provided they are well cared for and receive all required routine maintenance.