If you’re an American BMW enthusiast, you’ve likely heard of Enthusiast Auto Group, the premiere BMW restoration center and dealer in Ohio. It’s one of the very best BMW restoration centers in the country and puts out some of the highest-quality classic Bimmers on the market. It’s often known for selling classic BMWs at very high prices, due to their incredible quality and condition. This E34 BMW M5 Touring for sale is no exception, although it does come with a bit of a catch.

You maybe have already seen EAG’s E34 M5 Touring, as we featured it in a recent article, along with a video from EAG’s owner Eric Keller. As it turns out, the car is actually Keller’s personal car, not just an EAG car. In fact, Keller bought the E34 M5 Touring as a 25th birthday gift to himself and he’s owned it ever since. So you can imagine that he cares very much about it. Due to his love and care for it, he doesn’t want to sell it to just anyone, so it’s sort of a “sale by interview”, as Keller is more concerned with the car going to a good home, rather than making money on it. 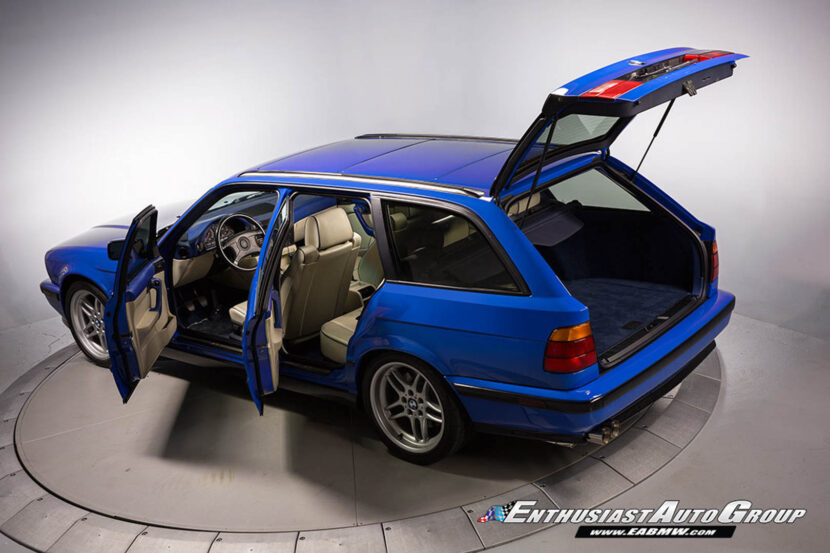 This also isn’t just any E34 BMW M5 Touring. Being a 1995 model year, it’s the final year of the E34 M5’s production. Which means, from the factory, it came with a six-speed manual transmission instead of a five-speed, four-piston calipers up front, wide kidney grills and hood and 18” M-Parallel wheels instead of the 17” throwing stars.

While the stock S38B38 3.8 liter inline-six engine made 340 bhp and 295 lb-ft of torque, Keller’s makes around 370 bhp and 320 lb-ft, thanks to some modifications, such as Schrick 280 Camshafts, Mark DaSylva Performance Chip with Dyno Tune and a center X-pipe with Eisenmann Race Muffler. It also has a lightweight flywheel, heavy-duty clutch, a 3:64 limited-slip rear diff and an AutoSolutions shift kit.

The color scheme is also incredibly unique, with a BMW Individual Santorini Blue exterior color over a Lotus White Nappa leather interior, which also features a ton of blue accents. It’s a genuinely special machine, one that’s completely unique. In fact, there were only two Santorini Blue E34 M5 Tourings ever made. 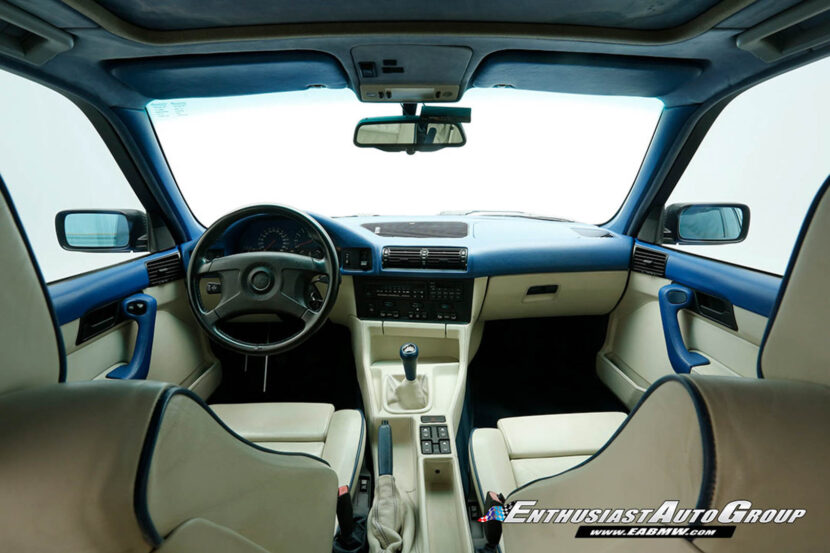 At the moment, it has about 96,000 miles on the odometer, so it’s a fresh car for its age and, in typical EAG fashion, is in incredible condition. So, honestly, there’s zero worry about any sort of issue, mechanical or otherwise, when buying this car.

That’s important when you check the price tag. To get this incredibly rare and cared for M5 Touring, you’re going to not only convince Keller to sell it to you but also drop $149,990. That’s a lot of money for a car of its age but it is a very special car, one that will never see its equal on the road in its entire life. So if you’re into rare, classic BMWs, this is quite the gem. If you’re interested in buying it, you can contact Eric Keller here.