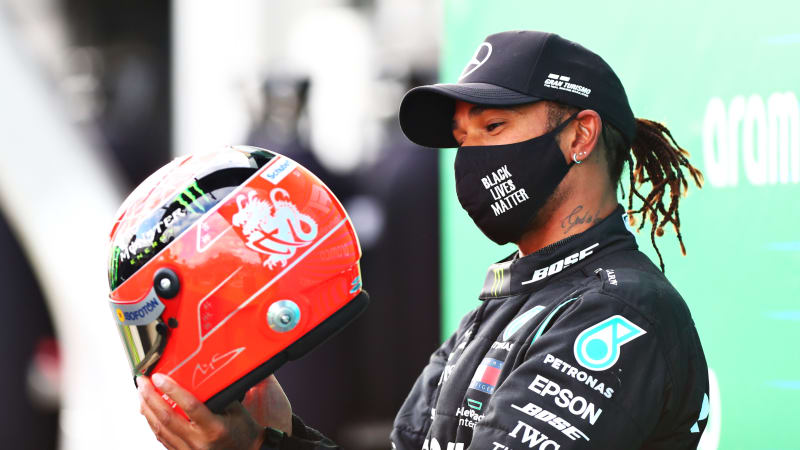 NÜRBURG, Germany — Lewis Hamilton matched Michael Schumacher’s record of 91 wins in Formula One with victory in the Eifel Grand Prix on Sunday as he took another stride toward his seventh championship title.

Hamilton started behind his Mercedes teammate Valtteri Bottas but took the lead when the Finn ran wide on lap 13. Bottas retired with a car problem five laps later. Hamilton comfortably held off Max Verstappen in the Red Bull after a safety car bunched up the pack late in the race.

Hamilton took the win by nearly five seconds from Verstappen, with third for Daniel Ricciardo in Renault’s first podium finish since 2011. Hamilton now leads Bottas by 69 points with six races to go. Winning the title would bring Hamilton level with Schumacher’s record of seven championships.

“What a result, thanks so much,” Hamilton told his team. Schumacher’s son Mick presented Hamilton with one of his father’s helmets after the race, and Hamilton took it with him to the podium.

Another record fell as Kimi Raikkonen started his 323rd race, beating the mark set by Rubens Barrichello from 1993 through 2011.

Raikkonen placed 12th after he picked up a time penalty for colliding with George Russell and sending the Williams driver into a spin. Russell retired with a puncture soon after.

It was another long race for Ferrari in a troubled season for the Italian team. Charles Leclerc started fourth but lacked the pace to hold the position and finished seventh while Sebastian Vettel trailed in 11th after a spin.

It was the first F1 race since 2013 at the Nürburgring in Germany and was named the Eifel Grand Prix after a nearby mountain range.