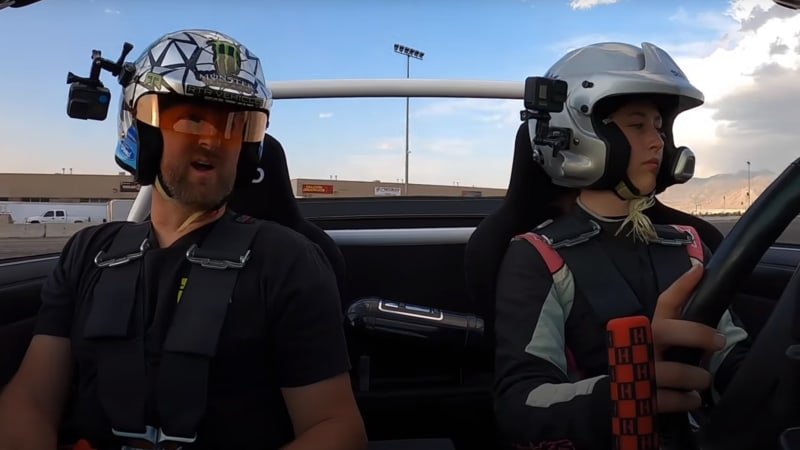 Last week, Ken Block shared a video documenting the acquisition and overhauling of a Fox Body Ford Mustang GT to be used to train his 14-year-old daughter, Lia, in the arts of drifting. This week, we get to see just how quickly she takes to getting the 5.0 delightfully sideways, with the help of one Vaughn Gittin Jr. Yeah, Papa Ken has some cool friends, as it turns out. Between the team who helped him put the Mustang together and one of the foremost names in professional drifting, Block appears to be calling in quite a few well-timed favors.

Lia Block is no stranger to the basics of car control. Earlier this year, Block shared a video documenting his efforts to teach Lia to drive stick, which began with basic lessons in Block’s Ford Focus RS. Lia, then 13, went on to learn the fine art of producing automotive confections at the helm of Block’s Mk II Ford Escort. The next step? Full-blown drifting. But first, they needed a car.

“I wanted to do something special for my daughter, Lia’s 14th birthday. So we enlisted the help of 90’s icon and 5.0 aficionado, Vanilla Ice, to bring our Carcaine Inspired Fox Body purchase up to 90’s hot-boi spec,” Block said in the description for the video which announced the completed Mustang build. Lia will use it as her drifting education vehicle for now, but her father has other plans for the Fox Body down the line.

In this video, Lia gets what Block calls “the FULL drift experience,” which includes “[b]reaking parts, track side modifications, running out of fuel, and persevering.” Gittin Jr. admits to being impressed by his pupil’s talent, consistency and dedication to the craft. Somebody has to get the next generation of car enthusiasts hooked, right? This looks like a great start.