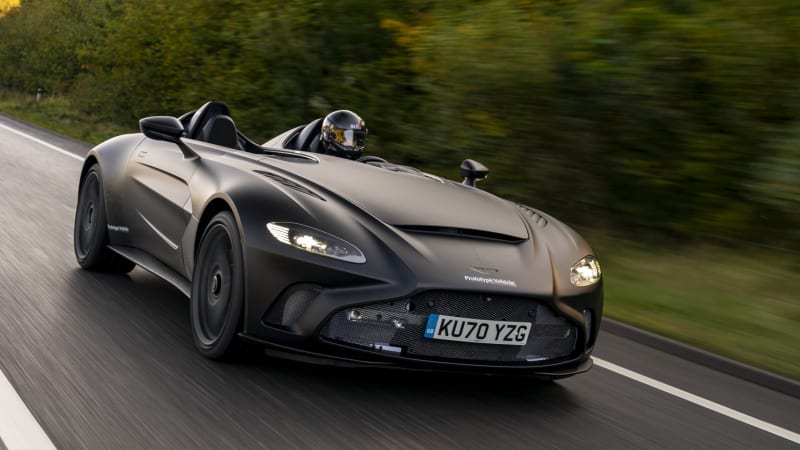 The V12 Speedster — Aston Martin’s “living show car” — has moved from the realm of dreams (and digital renderings) to the physical world. Here it is in the metal. In the composite? A bit of both, we’d reckon, but we can say this for certain: it’s definitely not glass.

Aston Martin’s 88-unit, $950,000, topless supercar is officially entering the physical development stage “in earnest,” the company’s spokesperson said, and here are the photos to prove it. Aston Martin had originally planned to start delivering V12 Speedsters in the first quarter of 2021, but whether that’s possible in the world of COVID-19 remains to be seen.

The company says this prototype is intended for “dynamic development,” meaning it’s going to be used to fine-tune road and track performance. Based on the details Aston Martin has released so far, we’re inclined to believe that it will be a treat in both departments.

Aston says the V12 Speedster is powered by a 5.2-liter twin-turbo V12 making 700 horsepower and 555 pound-feet of torque. Power goes to the rear wheels by way of a ZF eight-speed automatic gearbox. The British luxury builder claims this combo is good for a run to 62 mph in 3.5 seconds and a top speed of 186 mph.

The platform itself is made by combining elements of the DBS Superleggera and Vantage. It has 21-inch forged, center-locking wheels, huge carbon ceramic brakes and adaptive dampers.

As you can see from the gallery, Aston Martin did not include any photos of the prototype’s interior, and we suspect that’s because it doesn’t actually have one yet — at least not anything worth showing. That’s just as well. This is a single-purpose toy, not a touring coupe, and anything more than a well-anchored set of seats and intuitive driver controls is just a bonus anyway.