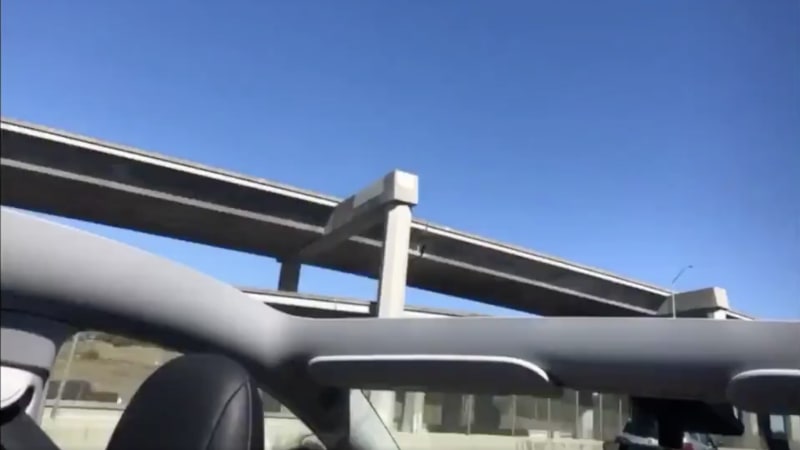 Panoramic glass roof panels are not supposed to fly off on the highway. You’d think that’d go without saying, but unfortunately, one recent Tesla buyer experienced exactly that almost unbelievable scenario shortly after taking delivery of a brand-new Model Y electric crossover in California. The new owner’s son was present for the inaugural drive and posted the experience to the Reddit Tesla Lounge, calling the automaker’s quality control “embarrassingly bad.” Hard point to argue, especially given Tesla’s history of poor quality.

Just prior to the instant convertible roof deployment, the poster says they “started to hear a ton of wind” while driving and thought perhaps a window had inadvertently opened until about a minute later when the entire glass panel lifted off and flew away. The father and son immediately turned around and returned to the dealership, where they called the local highway patrol to report the incident.

Hey @elonmusk why didn’t you tell us that Tesla sells convertibles now? Because the roof of our brand new model Y fell off on the highway pic.twitter.com/s8YNnu7m9L

A two-second video of the topless Tesla was uploaded to Twitter, and it shows just how large the unwelcome roof opening is when the panoramic glass is no longer in place. Misaligned body panels and imperfect paint application are one thing; an unsecured roof panel isn’t just a quality demerit, it’s a severe safety hazard. The new owners aren’t sure if the airborne roof caused any accidents, but with so much glass soaring through the air at highway speeds, such an outcome is distinctly possible. Not surprisingly, the would-be owners of this Model Y are “probably not” going to keep it, according to the Reddit thread.

Tesla is known for a lot of great things, from class-leading range to drag strip dominance, but build quality is not one of them. The internet is full of reports where Tesla owners document build quality issues and poor quality control. Earlier this year, JD Power found that Tesla owners report more initial quality issues than owners of any other brand in America. Suffice it to say, quality at Tesla has been an ongoing issue, and the current push to produce as many vehicles as possible in order to hit projected production milestones likely doesn’t help.

Back in 2018 when production of the Model 3 was rapidly ramping up, Tesla issued Autoblog a statement that read, in part:

In order to ensure the highest quality, we review every vehicle for even the smallest refinement before it leaves the factory. Dedicated inspection teams track every car throughout every shop in the assembly line and every vehicle is then subjected to an additional quality control process towards the end of line. And all of this happens before a vehicle leaves the factory and is delivered to a customer.

Based on this latest report, we guess the team still has a ways to go to “ensure the highest quality.” And that’s particularly true with something as potentially deadly as an airborne panoramic glass roof panel.