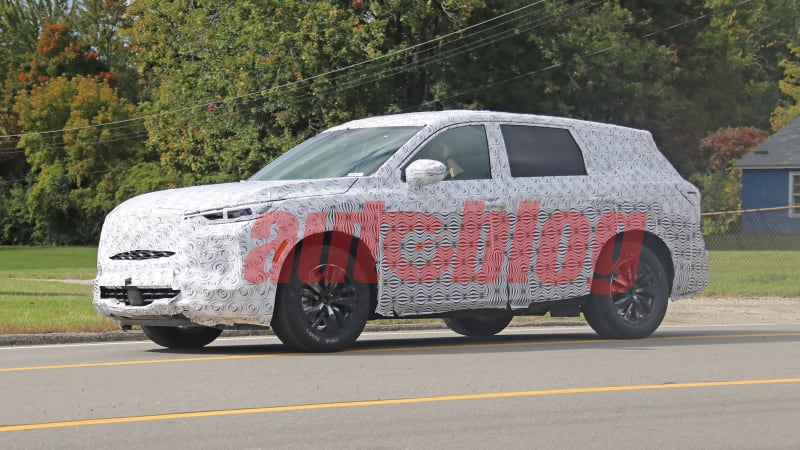 Infiniti recently revealed the QX60 Monograph Concept, a concept crossover meant to preview the next generation QX60. Today, the first spy shots of the QX60 in production form hit our desks. There’s a whole lot we can’t see under the camouflage, but it looks fairly representative of what we expect a production version of the Monograph Concept would look like.

The headlights, grille design, lower opening and side air intakes all look like they were pulled straight off the concept. It also has the same hood design with raised outer edges that lead right into the A-pillar. Its droopy side camouflage does a good job of disguising its curvaceous profile and pronounced rear fenders. We can see a hint of widening at the rear fenders, and we hope that the Monograph’s look is translated over to production there. The mirrors were moved further down onto the doors, and the flush door handles are done away with. This tester appears much less flamboyant with normal-size wheels replacing the giant and dramatic spinners on the Concept (gallery of the concept below).

Infiniti is copying the shape of the rear over to production. We can clearly make out the raked rear window, overhanging spoiler and rounded shape of the back end. The taillights are a bit difficult to see, but their general design matches up to the Concept. As for the fancy chromed exhaust area on the concept, those spots appear flat and barren on this preproduction model. It’s still heavily covered in camo, though, so we don’t yet know what the rear bumper design will look like in its final form.

The production QX60 is set to be revealed next year where it will likely go on sale as a 2022 model year car. It’s unclear what powertrain(s) will be lurking under the hood, but at least we know the production version won’t stray terribly far from the concept now.