I have thoroughly tested the range-topping 3 Series Touring equipped with the B57 state-of-the-art diesel workhorse during a 500-kilometer journey and came up to a surprising, yet arguably logical conclusion. I have always enjoyed estates – my first car was an estate, which I cherished pretty much. Besides the undeniable practical sides of owning a wagon, such vehicles, if properly penned, inspire sheer force and dynamism. While in the Eastern part of Europe, wagons are not a regular presence on the roads, in Western Europe they have quite an important share of the market.

Throughout the history, BMW managed to nail every single wagon they premiered, or “Touring” as they are traditionally entitled. It is no wonder that BMW Touring models are so popular – such that the Bavarians ultimately gave the greenlight to the first M3 Touring in history, scheduled to bow in 2022.

One More Step Before The First M3 Touring 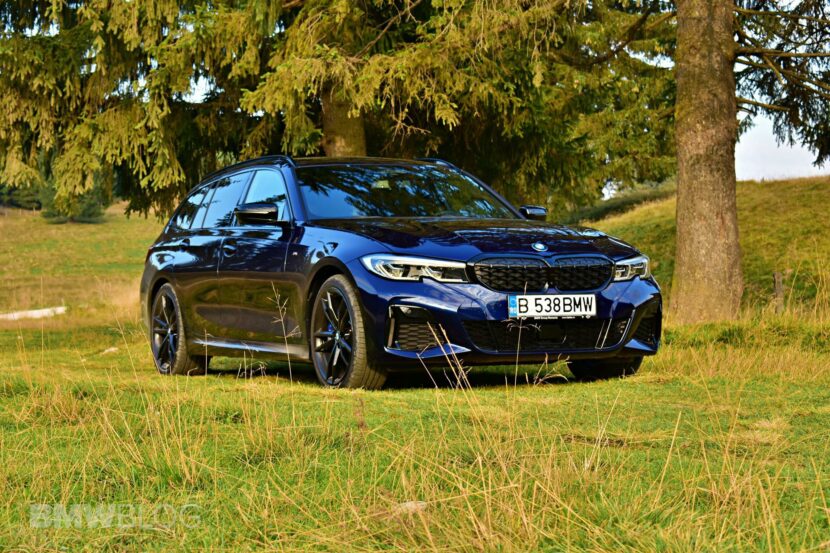 Until the G81 M3 is officially out – rumored for 2022 – BMW offers a sort of concentrated M flavor with the M340i and M340d models, that replaced the former 340i and 335d variant of the preceding F30/F31 generation. Applying the same marketing strategy as Mercedes-AMG rival does with the “43” and “53” entry-level high-performance cars, BMW labels the 40i and 40d versions of the 3 Series as M Automobiles.

While this is entirely or just partly true, it is debatable. The fact is that both the M340i and the M340d are pretty impressive machines and a complete departure from their predecessors. Having tested the M340i xDrive Sedan a while ago, I was eager to get behind the wheel of the M340d xDrive Touring. Furthermore, I was able to find out that less (horsepower) is actually more.

Getting to know the car inside-out 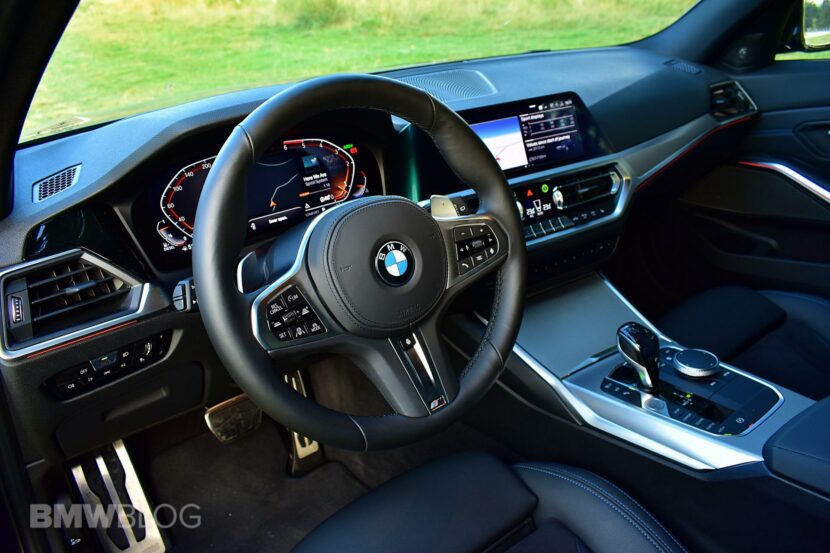 I was already familiar with the masterful design of the 3 Series Touring, with its nimbly-sketched details and the all-dynamic silhouette of the Bavarian mid-class wagon model. The G21 M340d test vehicle brought things one step closer to perfection.

I picked up the car in beautiful sunny afternoon at the dawn of Fall. This helped me clearly visualize and appreciate the majestic and muscular stance of the M340d xDrive Touring. The spectacular look was achieved mainly thanks to the BMW Individual Tanzanite Blue II metallic paintwork and the abundance of the BMW Individual high-gloss Shadow Line black ornaments, that were all over the place replacing the standard Cerium Grey accents.

The car was equipped with standard tires (not sport rubbers) and came with the 19-inch, double-spoke M 791 alloys in all-black finish, further complementing the Shadow Line adornments. All in all, the entire exterior upgrades highlight the high-performance claims of the M340d xDrive Touring. 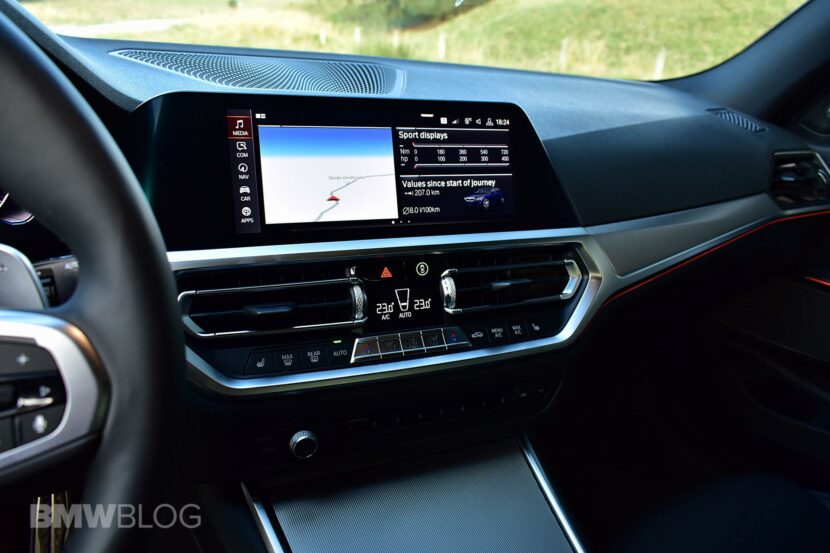 The dark scheme of the exterior was further continued in the cabin as well. The sport seats were covered in a special cloth/Sensatec upholstery, with the dashboard ornaments featured in Aluminum Tetragon, helping create both a classy atmosphere and a decisively sporty feel. The M340d also came with M Sport seat belts, with stitching in the three, iconic M colors.

Of course, the floor mats also visually expressed the M roots of the car, as well as the foot-resting panel and door sills labeled with the “M340d” logo. Strange enough, the digital interface of the OS 7.0 system was the standard, non-M version and thus did not came with the expected “M340d” lettering normally displayed in the Live Cockpit. 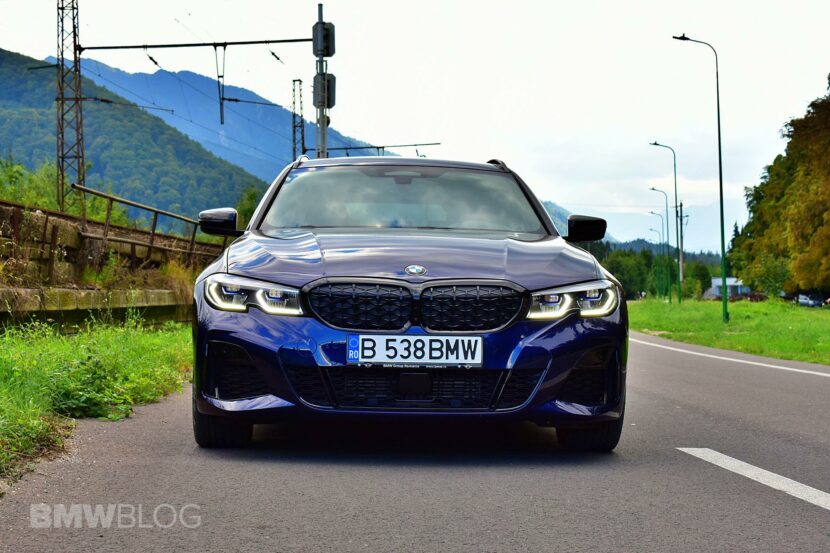 As I am a fan of BMW diesel powertrains, it goes without saying that I was instantly mesmerized by the car. The new B57 6-cylinder diesel engine employs electrification by means of the 48-volt integrated starter-generator. Compared to the outgoing, non-MHEV unit, the mild hybrid really pays off and is a welcome enhancement, with multiple gains in functioning, consumption and overall efficiency.

The straight-six powerplant has multiple personalities, with several dynamic facets and delivering an impressive level of performance in a smooth and effortless manner. Due to the extensive sound-proof insulation of the cabin, the diesel unit is barely perceptible. Of course, if you choose the SPORT setting of the engine sound from the menu, you will clearly notice the distinctive noise. But in the normal driving mode, we are clearly talking about an unexpected silence oasis. 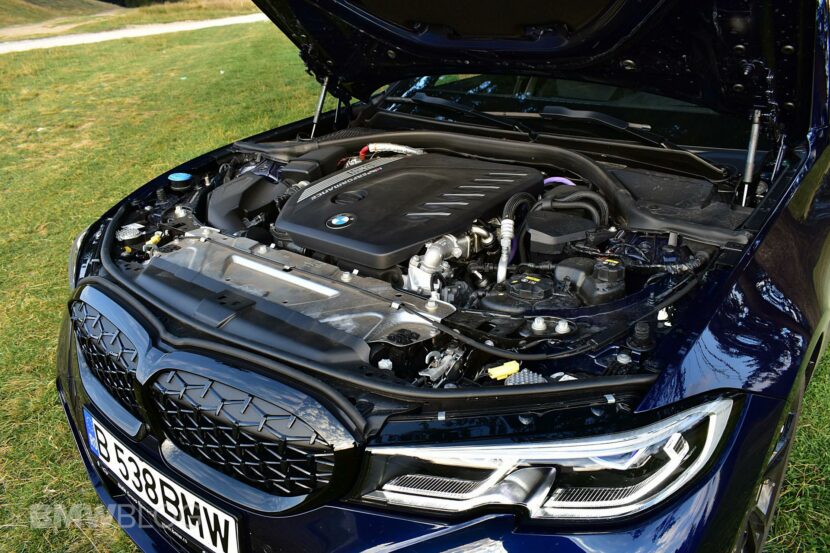 At a peak output of 340 PS (335 hp) achieved at 4,400 rpm, the M340d falls 34 PS short of the M340i. But the lower power numbers are effectively compensated by the torque characteristics, which help achieve outstanding accelerations and fast stints. The sport settings of the 8-speed Steptronic transmission and the standard xDrive chassis work together to deliver an impressive 0-100 km/h sprint in just 4.8 seconds.

The diesel engine is equipped with the BMW TwinPower Turbo technology and is capable of reaching a maximum torque of 700 Nm, fully available between 1,750 and 2,250 rpm. You can sense the mightiness of the engine at every stage during the driving. The 8 kW alternator is comprehensively supporting the engine at all times, further contributing to minimizing the fuel consumption as much as possible. 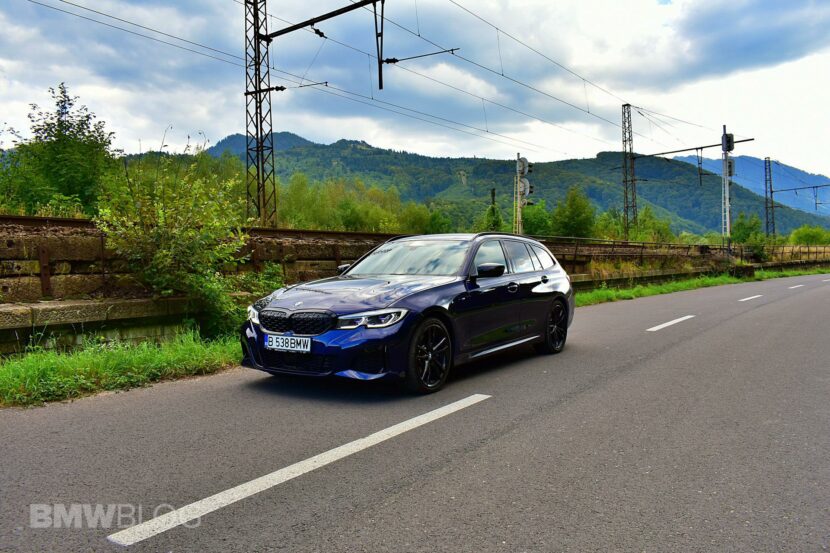 On the highway, the coasting function embedded on the G21 M340d allowed the engine to be shut off at times, thus helping me improve the fuel consumption and overall range. But, when needed, the B57 unit could also be a bad boy. I just had to touch the gas pedal a little firmer and the superb powerplant would instantly and fiercefully wake up to support me, especially during overtakings.

Sometimes brutal, otherwise incredibly calm – that’s how different the straight-six mild hybrid diesel on the M340d can be. Combined with the sharply tuned chassis and suspension, it really raises up the stake in the segment and transforms this high-end wagon into an almost perfect car.

I don’t know about others, but I was deeply touched by how precisely structured and packed the M340d Touring is. At the end of the day, the torquey diesel engine are miles better than what the M340i Touring can achieve, for example.

Of course, the B58 is a brilliant demonstration of engineering, but I really feel the diesel is better suited for the everyday use, permitting the same level of driving fun and dynamics characteristics, while also taking care of fuel economy and your budget. 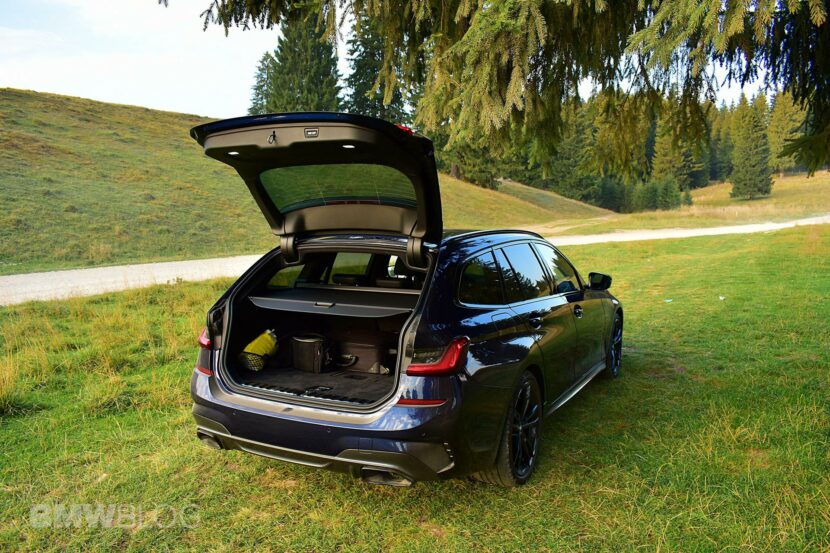 So, yes, less is actually more here: the lower output is not necessarily a minus here, when you add in the smaller acquisition price, the higher engine torque and the larger and more practical interior room and cargo space.

The M340d xDrive Touring is clearly the case where the engine makes the car and not the other way around.

The G21 M340d is clearly and notably a very fun car to drive. It is basically the best choice in the range if you want an impressive amount of high-performance attributes together with an unrestricted, comfortable and efficient everyday ride. It feels versatile and robust, prestigious and dynamic. The M340d xDrive Touring doesn’t certainly compromise and I would choose it blind-folded over the similar M340i version.

This BMW Touring is the type of car for which it is very challenging to find a potential downside. The G21 M340d impressed me with its new mild hybrid diesel engine, the generous cabin and cargo space, the versatile drivetrain offering both a comfortable and dynamics ride and the high level of everyday usability. It is a shame that the diesel hype is a little bit over, but this model surely has many strong virtues over many other, more intricately electrified vehicles. Ultimately, the M340d xDrive Touring essentially serves a single, definive purpose that’s accomplished properly: Sheer Driving Pleasure.