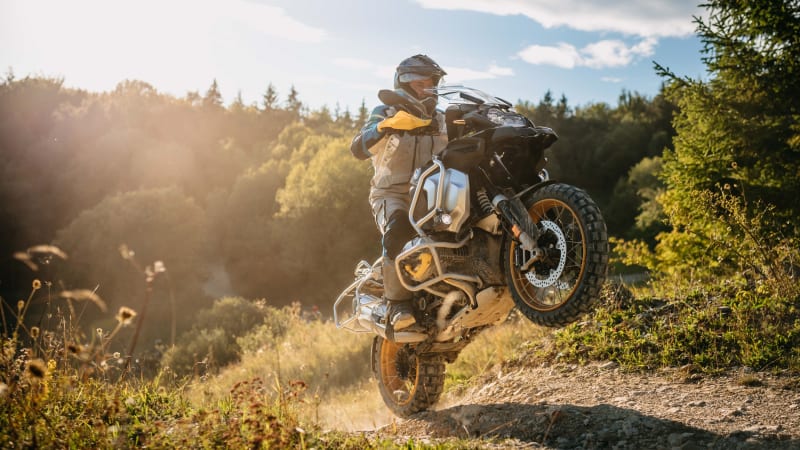 One of BMW’s best-selling motorcycles, the big GS, turns 40 in 2020. The company gave the R 1250 GS and the R 1250 GS Adventure design tweaks and technology borrowed from the car world to celebrate the milestone.

Stylists leaned on the R 100 GS (which was celebrated as a two-wheeled Range Rover when it made its debut in 1988) as they designed the commemorative, rally-inspired 40 Years GS variant, which receives yellow accents on the wheels, on the seat, on the fuel tank, and on the handlebars. Riders who would rather keep a low profile can order the subtler Triple Black variant, but Light White and Ice Grey remain on the color palette, too.

Adaptive LED lighting technology that trickled down from BMW’s car-building division joins the list of options. It adds a swiveling headlight that illuminates curves, which makes riding at night safer. Buyers can also pay extra for a heated seat, a selection of different footrests, and a power-adjustable handlebar. These features reflect the fact that BMW’s GS bikes are often used on long-distance rides, where comfort is tremendously important. They’re the ones you often seen with stickers depicting a third of the world’s flags on their side cases.

BMW is not making any major mechanical modifications to either bike, so power continues to come from a 1.3-liter flat-twin engine that delivers 136 horsepower at 7,750 rpm and 105 pound-feet of torque at 6,250 rpm. Both models receive a riding mode named Eco that’s also a hand-me-down from the car world, and they come standard with electronic driving aids like Integral ABS Pro, Dynamic Traction Control, and Hill Start Control Pro. They can’t ride themselves — at least not yet — but they help keep riders up in a variety of different conditions.

Paris-based Citroën celebrated 50 years of its GS, which has four wheels and a hydropneumatic suspension, earlier in 2020. Suzuki’s GS-badged motorcycles arrived in 1976 as 1977 models, and Lexus didn’t introduce the nameplate until 1993, though the sedan was closely related to the Toyota Aristo that’s turning 30 in 2021.