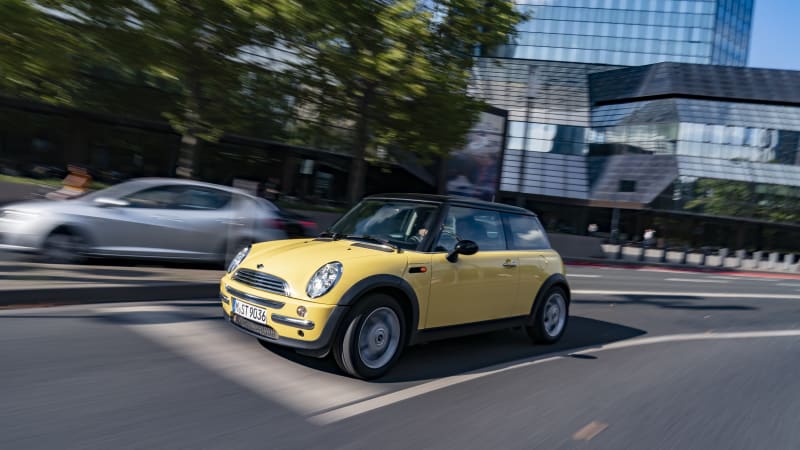 Mini is celebrating a major milestone. It unveiled the original Cooper Hardtop 20 years ago at the 2000 edition of the Paris auto show. More than merely a new car, this retro-styled hatchback laid the foundations for the entire brand.

Its predecessors sometimes wore Mini emblems, but they were always sold by various companies including Austin, Morris, Rover, and, through a licensing deal, Innocenti. The name didn’t officially denote a standalone carmaker until the hatchback was presented to the public in the French capital two decades ago. The decision to make Mini a brand came from executives at the top of BMW, which purchased England-based MG-Rover in 1994.

Developing a Mini for the 21st century was a Herculean task. Releasing an evolution of the original car, which made its debut in 1959, was completely out of the question; it had outlived its expiration date by decades, and was a fossil in automotive terms. The new model had to be designed on a blank slate. And yet, the development team decided it still needed to look like a Mini, and it also had to drive like one. After experimenting with several concepts, like the futuristic ACV30 (pictured below) shown in 1997, designers settled on a basic set of guidelines.

According to Mini, the project brief stated the 21st-century model needed to have short overhangs, round headlights, a hexagonal grille, and room for four passengers. It also had to be front-wheel drive, a layout that made the original car a packaging masterpiece (and, admittedly, a bit of a nightmare to work on), but stylists decided to give it a hatch in the name of practicality. Finally, product planners decided to push the Mini upmarket, away from its roots as a value-friendly alternative to bubble cars, and embed it firmly into premium territory.

Called R50 internally, the hatchback was initially offered in two variants named One and Cooper, respectively. Mini expanded the range in record time. Model year 2002 brought the hotter Cooper S (R53), a turbodiesel engine joined the European line-up in 2003, and a convertible (R52) was introduced in 2004. Sales in the United States started for the 2002 model year, and driving enthusiasts gave it a warm reception. It was well worth the wait.

BMW never planned to keep Mini anchored to a single model. It introduced the second-generation Cooper in 2006, and new variants arrived in rapid-fire succession. By 2010, there was a Mini to suit nearly everyone’s needs. If you wanted a wagon, Mini stretched the regular Hardtop out to make the Clubman (adding three wacky doors in the process). If you wanted a wagon for space, not seats, you could order a Clubvan. Motorists who wanted to sit higher could choose the Countryman, those seeking something a little stylish could select its two-door Paceman sibling, and Mini even entered the sports car segment with a pair of two-seaters named Coupe and Roadster, respectively. The hatchback and the four-seater convertible remained available, too.

In hindsight, the brand stretched itself too thin because many of the aforementioned nameplates retired without a successor. Mini canned the Clubvan, the Paceman, the Coupe, and the Roadster, but it expanded its range with a four-door evolution of the Hardtop based on the third-generation model released in 2013. In a way, the Mini family is more diverse in 2020 than it’s ever been; it includes the electric SE, the 301-horsepower John Cooper Works GP, and several versions in between. None would exist if the R50 hadn’t transformed Mini into a car company.

2021 will bring two heritage-imbued limited-edition models named Paddy Hopkirk (shown above) and Coral Red, respectively. Looking ahead, unverified reports suggest the company is also developing a pair of crossovers in a bid to better align its portfolio with demands of buyers in key markets like the United States and China. Mini won’t sacrifice the Hardtop as it pivots towards high-riding models, however. We expect to see the fourth-generation model in the coming years with a smaller overall footprint than its predecessor, a roomier interior, and more tech.