Periodically, Porsche has a phase in which it starts to change its cars. And it never fails to upset the faithful. The most recent uproar came about with the switch to downsized turbocharged engines, especially the new turbo flat-fours introduced for the 718 Boxster and Cayman siblings. Though the cars were just as fast as before, fans and reviewers lamented the slightly soggier response and the uninspiring new noise. Unfavorable comparisons to Subarus were made. Well, in news that will surely placate detractors, Porsche has reintroduced a naturally aspirated six-cylinder to the 718 line, first for the Spyder and GT4 twins and now for the newly reminted GTS 4.0 model. On top of that, it’s only available with a six-speed manual transmission, at least for now. So, does the new 4.0-liter make for the perfect Boxster?

The highlight of the 2021 Porsche 718 Boxster GTS 4.0 is obviously the new engine, and it’s exactly what you want and expect from a Porsche engine. The 4.0-liter naturally aspirated flat-six produces 394 horsepower, which is 29 more than the old GTS turbo flat-four but still 20 hp shy of the mostly identical 4.0-liter in the 718 Spyder. Basically, it’s a detuned version of the Spyder’s 4.0-liter engine, which is itself a larger-displacement, naturally aspirated version of the base 911 3.0-liter engine. Torque is actually the same 309 pound-feet as them both.

Of course, the 4.0-liter’s smooth, high-strung delivery is different from the turbo-four that provides more torque and power lower in the rev band. As a tradeoff, it boasts razor-sharp throttle response. It’s eager to rev, and it rewards you with more and more power the longer you stay on the throttle. And most importantly, it sounds like a Porsche, with the classic rumbling howl. Most of the noise actually comes from the throaty intake that you can hear behind your head. The dual-mode sport exhaust is very quiet most of the time, even at low rpm in its louder mode, but finally starts to scream above 3,000 rpm where the power really starts to build

The other peace offering to Porsche purists is the fact that the only transmission available for the GTS 4.0 right now is the six-speed manual. If you want the PDK dual-clutch auto, you’ll need to go with the Boxster S or 718 Spyder. The shifter is sweet, with a light, mechanical-feeling lever. The throws are a touch long, but with how easy it is to grab gears, it’s not an issue. Porsche also includes rev-matching, which is very responsive and makes shifting fast up or down very easy. This transmission would be a brilliant pairing for such an engaging engine if it weren’t for one thing: the gearing. It’s entirely too tall. At the top of second gear, you’re already past 80 mph, which is obviously well past the speed limit virtually everywhere in this country. This engine wants to rev, you want to hear and feel it rev, yet to do so, you have to drive speeds that’ll send you to jail … or require frequent trips to a race track. It’s an imperfect pairing and one forced by the need to use an existing transmission, specifically the one from the 911 GT cars. And it’s a big enough problem that, manual diehard though I am, I would probably recommend getting a GTS with a PDK if and when it becomes available.

Back to the good stuff. The 718 Boxster GTS 4.0 still has the spectacular chassis that its four-cylinder GTS predecessor had, which pretty much amounts to a Boxster S with a few options made standard. Those include a limited-slip differential and the Porsche Active Suspension Management sport suspension that includes variable dampers and lowers the car by 0.78 inch. The sport suspension is actually the setup that was optional on the four-cylinder GTS. Also added are active drivetrain mounts unavailable on the S. This also makes it the most robust handling package for the Boxster short of the Spyder and its 911 GT3-derived front suspension. 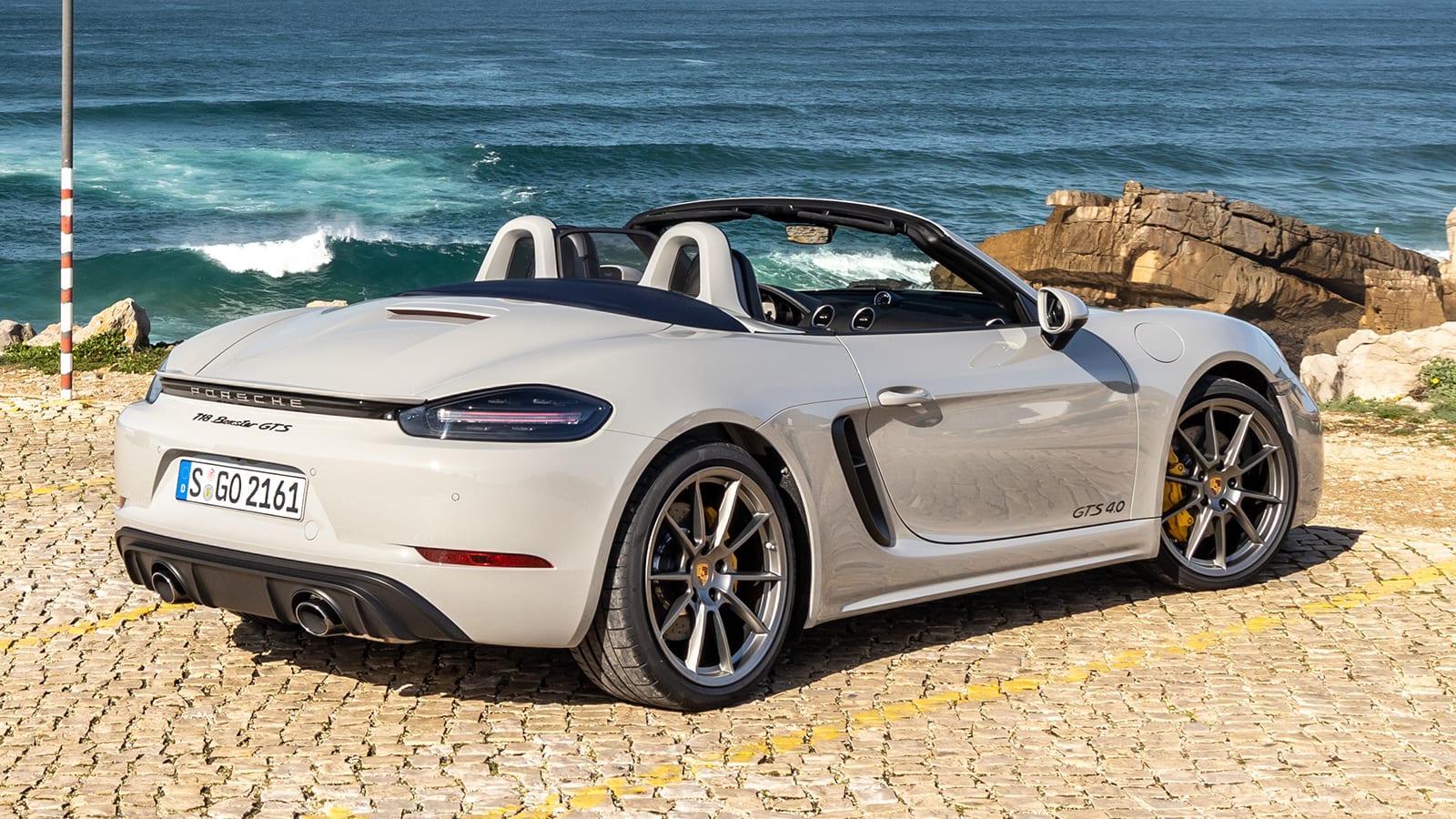 The result is a car that is solid and stiff, and that feels balanced and planted in corners. The steering is weighted darn near perfectly: not too light, not too heavy. The precision is astounding. There’s very little body roll, whether you’re in normal or one of the sport modes. The Boxster is easy and rewarding to drive as hard and fast through corners as you can. And when you do just want to cruise, the suspension is surprisingly comfortable. Sure it’s firm, a tad more so in the sport modes, but body control is good and hits aren’t too harsh.

Really, the only part of the car that might wear on you is the noise. Put the top up and you’ll notice large amounts of road and tire noise. Surprisingly, wind noise is well controlled. But the top still contributes to the cabin concert, as our test car’s had the tendency to rattle. On the plus side, the top is as easy to use as any other Boxster’s. By contrast, the only other six-cylinder Boxster, the 718 Spyder, has a lightweight but cumbersome roof that requires you to stop the car, get out and physically manhandle it into place. If you’re looking for one reason to choose the GTS 4.0 over the Spyder, besides price, that’s it.

Otherwise, the GTS still boasts the same spacious interior as any Boxster. There’s the superb, perfectly centered, low-down seating position; and the nicely bolstered seat that’s secure, but not restrictive. Plus, if you do want a quieter cabin in your mid-engine Porsche – plus additional structural rigidity – try the 718 Cayman GTS 4.0. 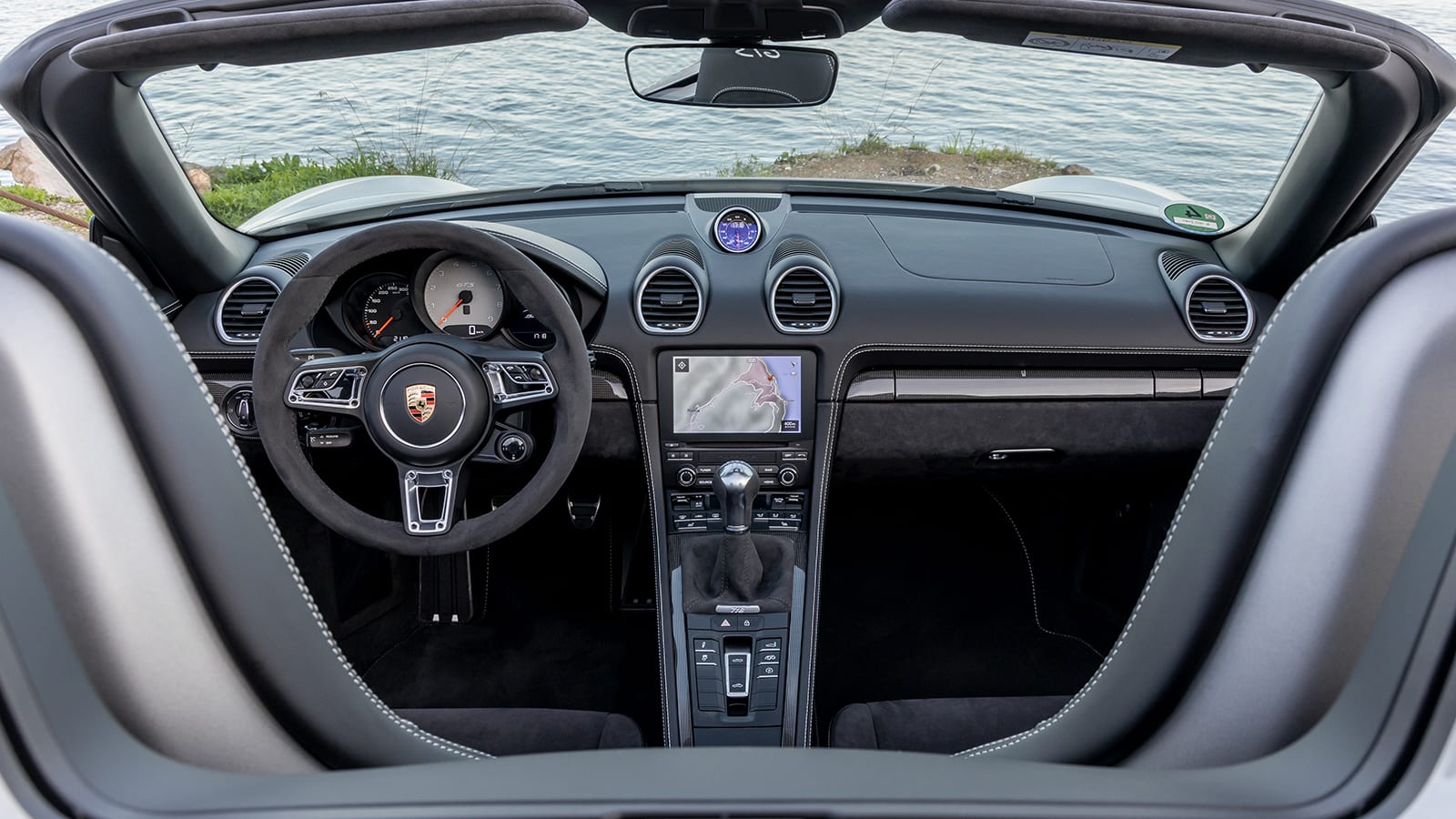 The 718 Boxster GTS 4.0 really is a superb sports car. It makes the classic Porsche sounds, it has spectacular handling, excellent power with incredible response, and it’s even pretty civilized. And while not cheap at $90,250, it’s not unreasonable given other Porsches. A comparably optioned Cayman S would be a few grand cheaper, but has the turbo-four down 44 horsepower and lacks the active drivetrain mounts. On the other hand, the GTS costs less than the 718 Spyder, which starts at about $97,000. For that, you get a bit more power, an even more enahnced chassis and greater exclusivity, plus the option of PDK. You also get the extra-hassle roof. The GTS 4.0 is also cheaper than a base 911.

With that as extra context, the GTS 4.0 is the most affordable and convenient way to get a new, naturally aspirated six-cylinder Porsche sports car – essentially the purists’ ideal. If it wasn’t for the frustrating gearing, it could be considered the most rewarding Porsche for the money, period.