Now that the BMW M4 has officially been revealed, cue the dramatic videos showing off the M4 in various exotic places, doing daring and interesting things to intrigue potential customers. In this latest video, a Sao Paolo Yellow BMW M4 Competition gets delivered, via helicopter, to the famous and iconic Yacht Club-de-Monaco for the media launch by BMW France.

This isn’t the first time a car brand has delivered a vehicle via helicopter for a video before. Aston Martin did the same thing a couple of years back, except it delivered a car onto the helipad of a building in the UAE. This time though, the BMW M4 Competition gets delivered to one of the prettiest and prestigious places on Earth.

To get the BMW M4 from its starting point to the stunning deck of the same yacht club that the Prince of Monaco attends, BMW M had to air-drop it in. Getting the M4 up in the air is awesome to watch. The car is jacked up and wheel carrier brackets are attached to the wheels, sitting underneath them. Straps connect those wheel carriers to the bottom of a helicopter, which then lifts the M4 up into the air. 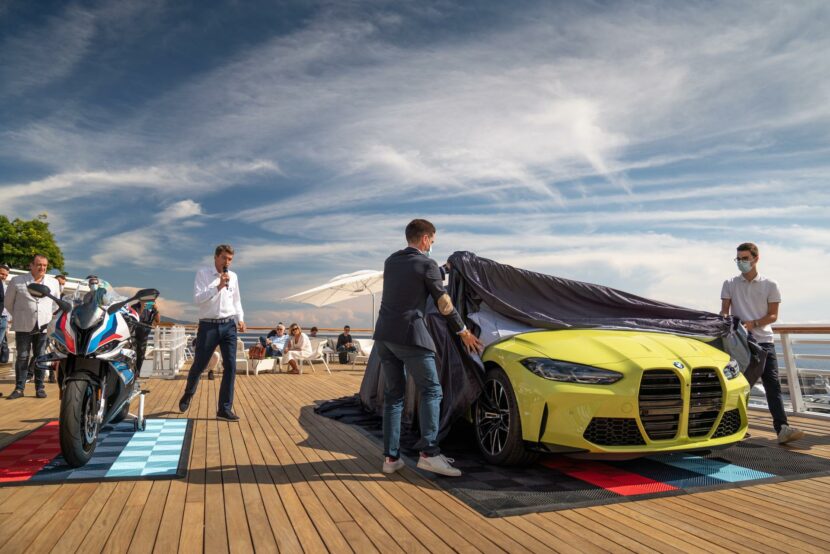 Just watching it in video is fascinating, as it seems incredibly difficult to fly a helicopter with a nearly 4,000 car hanging from the bottom of it. Every move must be extremely well-calculated and deliberate, so as to not get the M4 swinging around. Just watching the video, I was getting anxiety for the pilot, I can’t imagine actually doing such a thing.

When the BMW M4 finally touches down the the stunning deck of the Yacht Club-de-Monaco, it’s met with many high-dollar guess, real movers and shakers, in some of the prettiest scenery on Earth. Say what you want about the M4’s styling (and I’ve said plenty myself) but that color absolutely rocks and works perfect in Monaco.