Autoblog may receive a share from purchases made via links on this page. Pricing and availability is subject to change.

RC vehicles are fun at any time of year, but there’s something special about staging a huge jump and sending a remote controlled car into a huge pile of leaves in the fall. If your schedule is still pretty wonky thanks to everything currently going on in the world, now is probably a great time to create that backyard obstacle course of your dreams. The issue, though, is that if you have a really nice RC car, you probably don’t want to risk wrecking it by shooting it off of gnarly jumps. Well thankfully, the best selling RC vehicle on Amazon is super affordable right now at just $33.98, so you can worry a bit less if you decide to drive it off of your roof or something.

We’re talking about the Bezgar 17, a 1:14 scale remote controlled monster truck. The truck itself weighs just over 2 lbs and uses a wireless control system which runs on a 2.4 Ghz frequency. You can charge the car’s battery via USB and the little 4-wheeled monster has a top speed of around 15 mph. It has front and rear bumpers as well as a scratch-resistant shell with an aluminum alloy frame, just in case you’re partial to driving like a daredevil. On a full charge, you can get about 20 minutes of run time at full speed, and a bit more than that if you’re not using a lead foot, or in this case, a lead thumb?

Amazon reviewer J. Futchko had this to say about the car in their 5-star review of the product:

“I think this car will provide my kids with a little more enjoyment than the last few cars. They keep asking for cars that go outside (as they destroyed the last few trying to drive them in the snow & rain). I chose this car since it seemed to be a little bigger than the other cars according to the provided dimensions. Granted, it’s still not as big as some of the monsters at Sam’s Club or hobby stores, but it doesn’t cost $100 (or more) [like] a lot of them. I have tested the car out while the kids were at school today and here is what I determined so far … The car body is nice as it has metal panels, way nicer look and feel than the usually molded plastic. The controller is ok, nothing outstanding, but then again this was the 1st pistol type I’ve ever held, so it might be on par with everything else, but it seems a little flimsy. Both in the steering knob and the trigger mechanism. Steering responds quickly and so does the drive motors, I guess only time will tell if the knob holds up to repeated flipping as the kids wizz around … The box [it] comes in is sturdy and the two batteries, screwdriver, instruction and USB charger are under the bottom cardboard … So, final impression of the car is that it should be a decent toy for the kids (or occasional Dad drive). It is definitely not a high-end RC, but not the typical $20 Walmart small-wheel junk box either.“ 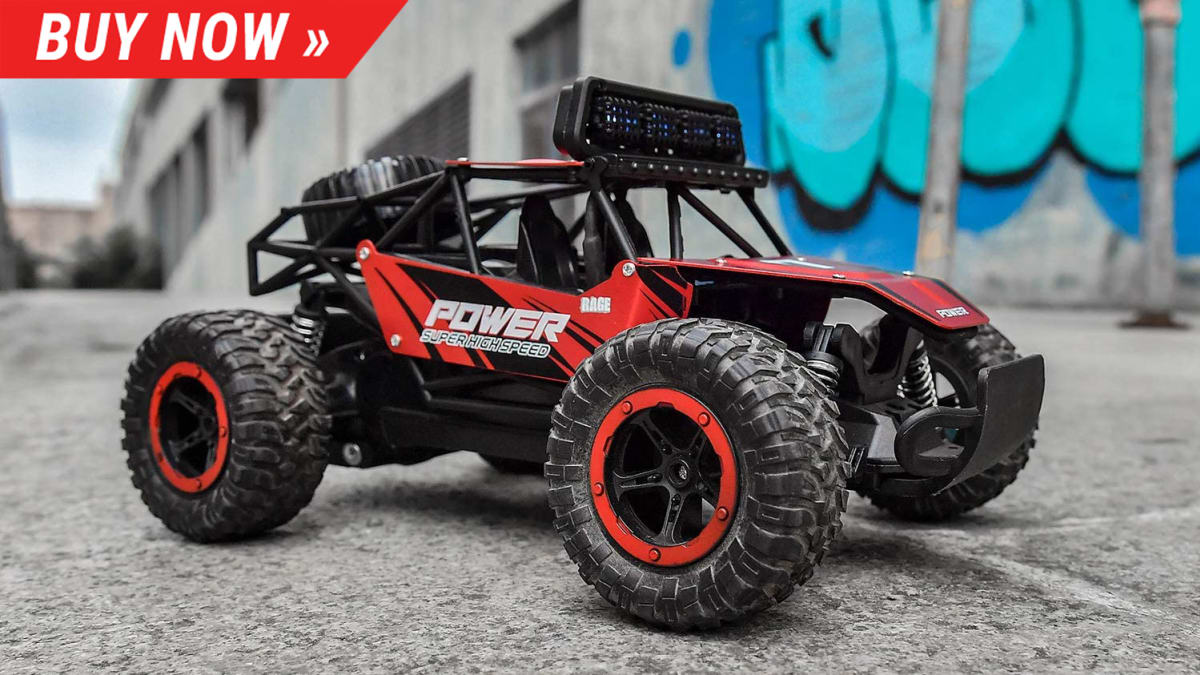