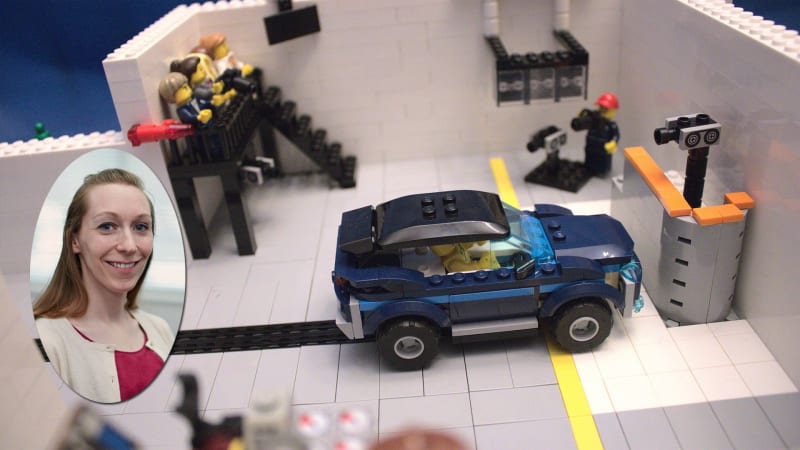 It’s amazing what people can do with a lot of creativity and, presumably, an equally ample amount of time. Engineer Becky Mueller of the Insurance Institute for Highway Safety (you know, the non-profit outfit that does all those crash tests and gives out Top Safety Pick awards) created an incredible stop-motion animated video of one of their crash tests using Lego.

From calibrating the dummies to a Lego man sweeping up after the crash, Mueller created a charmingly thorough recreation of an IIHS crash test. Specifically what appears to be the moderate frontal-offset crash test the Institute has been doing for decades now. It took two months, 1,000 Lego pieces and 1,500 photographs to create it.

From the dummy calibrations to post-crash cleanup, this Lego crash test is remarkably similar to the real thing. IIHS’s Becky Mueller, with plenty of spare time thanks to the pandemic, recently returned to a childhood hobby of crash testing Legos. Check it out! pic.twitter.com/YWDErt0M3W

Mueller is a senior research engineer who has been involved in the Institute’s small overlap frontal crash program and real-world crash investigation studies. She has been with the IIHS since 2011, having previously worked for the National Highway Traffic Safety Administration and General Motors.

“I always had an interest in cars, which is a pretty unusual thing for little girls to be interested in,” Mueller told Rewire.org back in 2017. “My family I sat down one night (when she was 10 years old) — my parents always watched Dateline, on NBC — and I actually saw the very first crash test results from the Insurance Institute and it just kind of clicked for me. I was like ‘This is so cool! I’d be able to work with cars every day, get paid to destroy something, and do something that is good for people. I can save people’s lives and they never even have to meet me.”

To get the ball rolling on her nascent career, she would build Lego cars and crash them into a Lego wall. Now, with the pandemic keeping her at home, she kept busy by going back to where it all started. The above video is the result of her efforts.

You can find additional videos and more photos of her Lego IIHS crash test lab at her personal site BeckyTheCrashTestEngineer.blogspot.com.