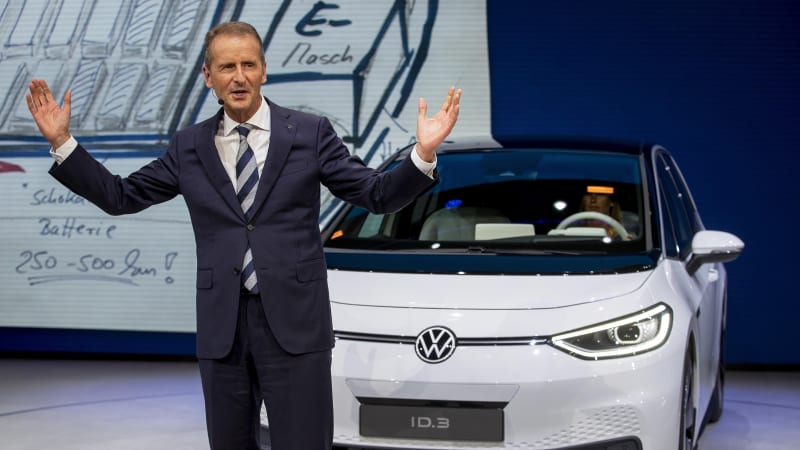 FRANKFURT — Volkswagen needs to change to stay relevant in the electric and digital vehicle era and will announce “important steps” to that end before the close of the year, Chief Executive Herbert Diess said on Wednesday.

“Volkswagen needs to change: From a collection of valuable brands and fascinating combustion-engine products that thrill customers with superb engineering — to a digital company that reliably operates millions of mobility devices worldwide,” Diess told shareholders at the company’s virtual general meeting.

Vehicles need to stay in contact with customers, offer new services and comfort functions on a weekly or even daily basis, he said.

“We will take further important steps to set the course for this in the rest of 2020,” Diess said.

Senior executives told Reuters the company is reviewing what role its high-performance brands Lamborghini, Bugatti and Ducati will play as the company increasingly focuses on electric, digital and autonomous vehicles.

Volkswagen, which also owns VW, Audi, Porsche, Seat and Skoda, is looking at whether it has the resources to accelerate development of electric platforms for smaller brands at a time it is investing billions to transform its more mainstream cars.

Asked whether Ducati, which is known for making noisy combustion-engined motorbikes, has an electric future, Markus Duesmann, who oversees research and development for the group, said: “It will not take long until we see an electric Ducati.”

Whether Ducati, which is a medium-sized premium motorbike brand, would offer an electric variant, depends on whether a bike could offer range comparable to a combustion-engined variant, Duesmann said.

Advances are being made in battery technology which could make this possible, he added.

Separately Frank Witter, the company’s chief financial officer, in response to a question about whether a sale of Lamborghini is planned, said Volkswagen does not comment on speculation about potential divestments.

Lamborghini’s Chief Executive Stefano Domenicali this week announced his departure from the sports car maker to take on a new job as president of Formula One.

Volkswagen is reviewing the future of these three high-performance brands as part of broader quest for more economies of scale as it shifts to mass producing electric cars, senior executives told Reuters.

Volkswagen’s management board and directors will look at the carmaker’s strategy at a meeting in November and are working on a new “to do list” as the company tries to more than double its value to 200 billion euros ($235 billion), one executive said.

The review could result in technology partnerships for the high-performance sports car and superbike brands, restructuring, or other options up to and including a listing or sale, two executives, who declined to be named, said.

They said Volkswagen, which also owns VW, Audi, Porsche, Seat and Skoda, is looking at whether it has the resources to develop electric platforms for its smaller brands at a time it is investing billions to transform its more mainstream cars.

The stark choice faced by Volkswagen comes as Diess seeks new ways to free up cash to fund its move away from combustion engines after powerful labor leaders blocked a cost-cutting drive in Germany.

In an interview with Reuters, Diess declined to comment on the high-performance brands individually but acknowledged that Volkswagen, which also has a stable of trucks, needed to reinvent itself for an era of electric and autonomous cars.

“We are constantly looking at our brand portfolio, this is particularly true during the phase of fundamental change in our industry. In view of the market disruption, we must focus and ask ourselves what the transformation means for the individual parts of the group,” Diess told Reuters.

“Brands must be measured against new requirements. By electrification, by reach, by digitalization and connectivity of the vehicle. There is new room for maneuver, and every brand must find its new place,” he said.

Besides building the common electric vehicle architecture that will underpin many of its bigger brands, Volkswagen needs to free up cash to develop connected and autonomous vehicle technology and new forms of mobility services.

Last year, Volkswagen sold 4,554 Lamborghinis, which start at about $200,000 and cost millions for special editions. It sold 82 Bugattis, which have seven-digit price tags, and just over 53,000 Ducati motorbikes.

But some company insiders question whether it’s worth investing scarce resources to produce silent electric versions if they don’t appeal to fans of the noisy, high-octane brands.

Unlike many U.S. firms which can tap more liquid and deeper capital markets to raise money for investment, Volkswagen relies more on cash flow from sales of combustion-engine cars to fund its shift to battery-powered vehicles.

“We are a large conglomerate and have to struggle with a low multiple and a conglomerate discount. But we are doing something about it,” Diess said, pointing to the sale of engine drive maker Renk and the restructuring of truck brand MAN.

Diess believes the company’s valuation will rise once the market understands how profitable its electric vehicles are, but it faces a short-term investment crunch after EU lawmakers proposed a 50% cut in carbon dioxide emissions by 2030.

He told Reuters the goal of raising Volkswagen’s market value to 200 billion euros by 2025 was still valid.

“We formulated the 200 billion euros company valuation as an aspirational target,” Diess said.

“Volkswagen is severely undervalued when you look at its technological competence, its global positioning and perhaps also when you see that, compared with the competition, we have the best prerequisites in terms of technology.”

Now, Volkswagen is worth $91 billion, far below rival Toyota’s $187 billion valuation, even though it sold more vehicles than the Japanese company last year. Volkswagen sold 10.96 million — the most by any carmaker in the world — while Toyota came in second with 10.74 million.

Analysts say that’s because Volkswagen has more brands, is less efficient and has higher costs. Volkswagen Group had 671,205 employees at the end of 2019, well above the 359,542 Toyota staff at the end of its last financial year.

Bankers are pinning their hopes on investor enthusiasm for companies pushing sustainable transportation and on support from labour leaders for financial transactions which may help Volkswagen raise cash for investment.

“The crucial thing now is to manage the transition to electromobility. That is by far the greatest lever for us in this phase,” Diess said. “Individual mobility will change dramatically. Electrification only accounts for 10% to 20% of this change. The big push will come from the increasing intelligence of vehicles.”

A new software stack for the company’s 10 million vehicles won’t hit the market until 2023 or 2024, Diess said, making it harder for investors to recognise VW’s potential now.

Tesla’s value has surged this year to above $400 billion as investors backed the U.S. pioneer to cash in on an electric vehicle revolution.

Although analysts say radical surgery is needed to boost Volkswagens’ stock price, winning over its supervisory board, where workers control half the seats, may be the hardest part.

“The company’s strategy is good. It has already foreseen that there will be adjustments here and there,” Volkswagen Group’s supervisory board Chairman Hans Dieter Poetsch told Reuters, referring to some divestments already announced.

Volkswagen has no plans to list Porsche or Audi, and other plans will only get a hearing if they protect jobs in the long run, according to IG Metall, Germany’s biggest union.

Its leader, Joerg Hofmann, told Reuters he was not fundamentally opposed to listing, or spinning off divisions.

“We have never opposed plans by a company to fund growth on the stock market,” he said. “But if the goal is to break up a company for the sake of getting a higher valuation, or to separate off ‘Bad Industry’, then we say No,” Hofmann said.

Rather than walking away from underperforming assets, the company has a responsibility to invest in the future of its employees and locations, he said.

“I think Diess is taking the right path,” Hofmann said.

“In the last five years I have learned a lot here. In Wolfsburg we have our own culture and also special power structures. This requires a very integrative management style. With my sometimes confrontational approach, I have reached my limits. I have to recognize that and adjust to it.”