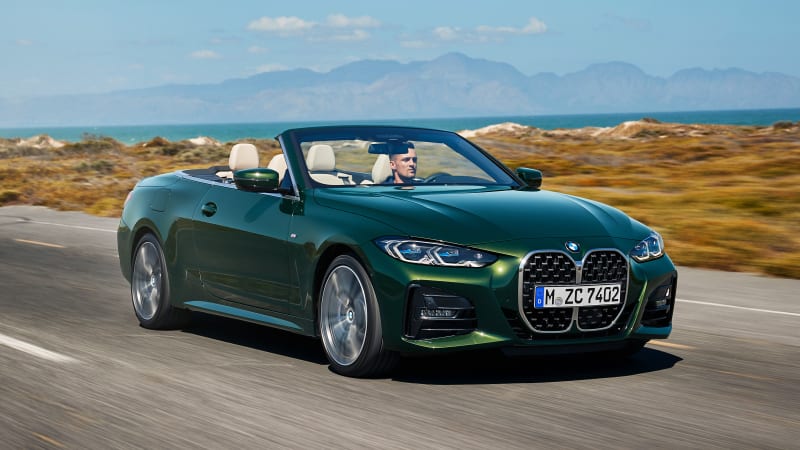 Following closely on the heels of the latest BMW 4 Series coupe comes the new 2021 BMW 4 Series convertible. As expected, the four-seat droptop 430i and M440i adopt their coupe counterpart’s giant bucktoothed grille but do surprise by switching from the previous retractable hardtop to a traditional soft top.

While a retractable hardtop was used by the previous 4 Series as well as the preceding 3 Series convertibles going back to the F20 generation, BMW notes several advantages for making the switch. The insulated, multi-layer soft top is claimed to be 40 percent lighter than the previous hardtop, and it’s more compact when lowered, allowing for a 1.2-cubic-foot larger trunk. The top is available in black or Starlight black (black with silver woven into the material) and can be raised or lowered at speeds up to 31 mph, an operation that takes 18 seconds. Those actions also can be initiated via the remote on cars equipped with Comfort Access, which is standard on the M440i and optional on the M430i.

Powertrains essentially mirror those of the hardtop coupe, with one addition. The 430i uses the same B46 2.0-liter four bolstered by a twin-scroll turbocharger, making 255 horsepower and 295 lb-ft of torque. The B48 3.0-liter six also boasts a twin-scroll turbo and spins out 382 horsepower and 369 lb-ft of torque. BMW says the 430i convertible should reach 60 mph in 5.9 seconds, with the 440i able to do so in 5.0 seconds. As on the coupe, the B48 is joined by a 48-volt starter/generator hybrid assist system. It recuperates braking energy, which is stored in a 48-volt battery, and can tap that energy to supplement the powertrain under acceleration. It also smooths the operation of the start-stop system and allows it to shut down the gasoline engine at speeds as high as 9 mph when decelerating.

The 2021 430i and M440i convertibles both can be had with either rear-wheel drive or AWD (whereas the coupe is not offered in rear-drive M440i form). With either engine, your only transmission choice is an eight-speed automatic, as the six-speed stick previously offered on the 430i and the 440i has been consigned to history. One interesting new wrinkle to the eight-speed automatic is its Sprint mode. Pull and hold the left shift paddle, and the throttle response, exhaust system, and transmission mapping all switch into Sport mode, while the gearbox downshifts into the lowest possible gear.

The M440i comes with additional chassis embellishments including an M Sport suspension, M Sport brakes, and Variable Sport steering, all of which can be added to the 430i. An Adaptive M Suspension and a Dynamic Handling Package are optional for both models.

Technology features include an 8.8-inch touchscreen standard with a 10.25-inch unit available along with a 12.3-inch digital instrument cluster. Navigation is included as is wireless Apple CarPlay and Android Auto. Standard driver assists include forward-collision warning with pedestrian detection and automatic emergency braking, lane-departure warning with lane-keep assist, blind-spot monitoring, and rear cross-traffic alert. Optional items include adaptive cruise control with stop-and-go capability, Extended Traffic Jam Assist, automated parking, a drive recorder, and a 3D surround-view camera. With the latter, one can call up a live image of the parked 4 Series on their smartphone.

Like its coupe counterpart, the 4 Series convertible has grown by just over five inches in length, 1.6 inches in wheelbase, and one inch in width. The 440i models get a matte Cerium Grey finish on various exterior elements, while a Shadowline Package renders them in gloss black. The M Sport Package also features black trim as well as restyled front and rear bumpers. The car in these pictures is finished in San Remo Green Metallic, one of three new colors out of a total exterior palette of 11 (nine of which are extra cost).