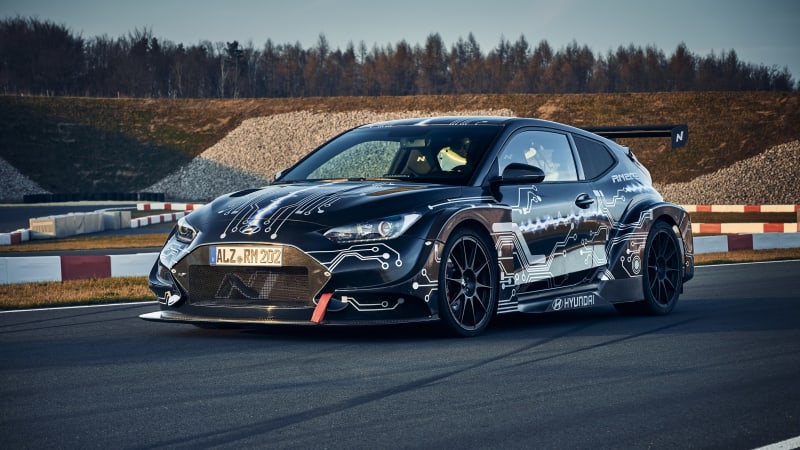 Don’t be fooled by the Veloster-like body; nearly everything lurking under the surface is new. Instead of using a turbocharged four-cylinder engine, Hyundai leveraged its partnership with Rimac to design an electric powertrain that consists of a single 800-volt motor linked to a 60-kilowatt-hour lithium-ion battery pack. It zaps the rear wheels with up to 810 horsepower and 708 pound-feet of torque, though the first figure is only available in 20-second bursts. Hyundai quotes a sub-three-second zero to 60 mph time, and a top speed of over 155 mph.

Engineers installed the motor directly behind the front seats to improve the RM20e’s weight distribution while putting an electrified spin on the concept of a mid-engined hot hatch. Six-piston front calipers rein in the cavalry.

Hyundai has tested mid-engined prototypes since it unveiled the RM14 in 2014. It has also shown the RM15, the RM16, and the RM19, but none of these have seen the light that awaits at the end of a production line. Nothing suggests the RM20e will receive the thumbs-up for production, either. It’s very much a prototype, it’s referred to as a rolling lab, and it was built primarily to help engineers extract valuable data about electric technology. Some of the lessons learned during the testing phase will permeate production cars in the coming years, however.

“The electrified RM platform will continue to evolve along with the growth of this Rimac partnership,” Hyundai said in a statement. Interestingly, it said the Croatian firm — which may be on the verge of taking over Bugatti — facilitated the development of its electric and hydrogen-powered prototypes. We’ve only seen the former so far, but the company’s statement suggests the RM21 may be equipped with a high-performance fuel cell.