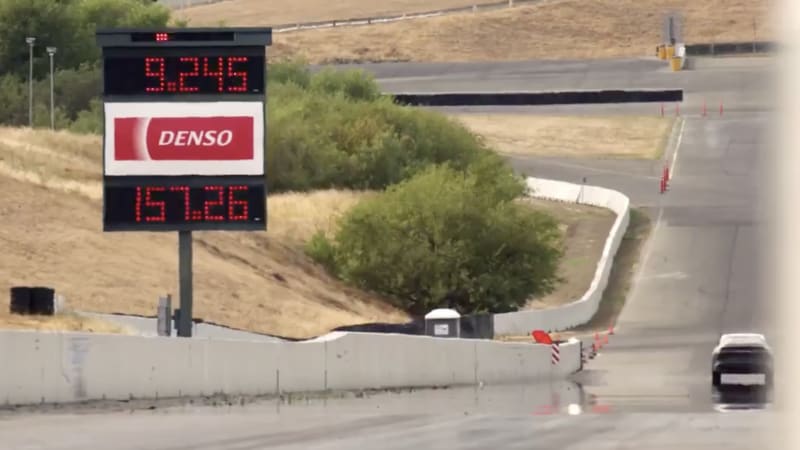 A prototype for a high-performance tri-motor version of the Lucid Air electric sedan recorded a blazing 9.245-second quarter-mile, and to dissuade doubters, the event was captured on video. Staving off would-be detractors in this case is probably a good idea, because this kind of acceleration is bordering on scarcely believable. And the craziest part is that we’ve got a feeling the Lucid team isn’t even content to rest on that 9.2-second performance.

Before we go any further, let’s put 9.245 seconds into perspective. Back in 2017 when Dodge introduced the Challenger SRT Demon, we were awed that the 840-horsepower tire-shredder could cover a quarter of a mile in 9.65 seconds. So was the National Hot Rod Association, which at the time proclaimed the Demon the quickest production car of all time. The demonic Challenger was capable, under just the right circumstances and on specific drag-racing tires, of launching from 0-60 in 2.3 seconds with its front tires skimming the tarmac, but it was darn near impossible to avoid the immediate loss of rear-wheel traction and launch that hard consistently.

More comparable to the Lucid Air is the Tesla Model S with all-wheel drive and Ludicrous mode. Musk’s current top-shelfer can do relatively repeatable 0-60 runs of around 2.3 seconds thanks to its simple foot-on-the-pedal launch style, all-wheel-drive traction and instant-on electric drivetrain. Although no 0-60 has been shared for this version of the tri-motor Lucid Air, it’s likely a tad quicker than the already Ludicrous Model S. We’ll have to wait until Tesla goes Plaid to see the next rung of Model S performance.

Perhaps more impressive than the elapsed time is the trap speed that this Lucid prototype recorded at the drag strip. As Motor Trend points out, 157 miles per hour at the end of the quarter mile is mind bending. And it indicates that even quicker elapsed time measurements are likely to come once more traction can be dialed in.

Let’s just say we’re looking forward to seeing if Air versus Model S will become the next Mustang versus Camaro in the burgeoning electric speed wars.