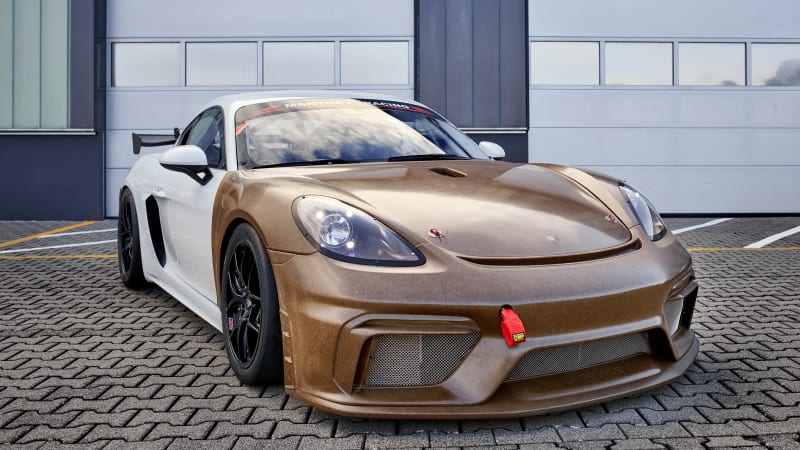 If you want more fiber, your nearest grocery store’s cereal aisle is likely your best bet. Race car drivers might soon have another option: the closest Porsche dealership. The firm began experimenting with plant-based parts in 2016, and it will put the lessons it has learned through a grueling real-world test in September 2020.

Porsche explained it has built a track-bound 718 Cayman GT4 whose front and rear aprons, front spoiler, front and rear lids, mudflaps, and air diffuser are made with natural materials that replace metal and plastic in the production process. They’re non-structural components, so metal can’t be taken out of the equation entirely, but they’re about as heavy and as stiff as parts made with carbon fiber, and they meet the same quality standards.

Farmed flax (which is also known as linseed) is the first recipe’s secret ingredient. It’s a hugely versatile plant whose oil can be cooked with potatoes and beets, or used as a hardener in the putty that glazes glass into wood frames, among other applications. Porsche noted it relies on a different, balsa-based composite to make the doors and the rear wing. It’s a soft wood prized by companies who build surfboards and table tennis paddles.

Natural fiber-based materials absorb vibrations better than composites like plastic and carbon fiber, according to the German firm, and they splinter into smaller, duller pieces when smashed. They’re just as safe, too, but that doesn’t mean your next Macan will have linseed bumpers. Building a part that can survive a race is challenging, but making one capable of withstanding a decade or more of four-season use is even more difficult.

Wearing number 420, Porsche’s fiber-wearing 718 Cayman GT4 will race in the 2020 Nürburgring 24-hour race, though it does not have homologation to compete in the SRO racing series. If everything goes well, the body kit will likely be offered to private racers by a company named Manthey Racing. Pricing hasn’t been announced.

Other carmakers have tried injecting natural fibers into the manufacturing process. In 1941, when industrialists worried about steel shortages, Henry Ford unveiled a car whose body panels were largely made with hemp. It never reached production. East Germany’s much-mocked Trabant 601 wore body panels manufactured using a cotton-based material named Duroplast. After the Berlin Wall fell, German scientists tried recycling unwanted 601s by feeding them to cotton-hungry bacteria that could reportedly eat one car’s worth of parts in 20 days.