It’s Child Passenger Safety Week in the United States. According to the global nonprofit Safe Kids Worldwide, vehicle crashes are a leading cause of death and injury for American children and correctly used child car seats can reduce the risk of death by 71%. However, also according to Safety Kids Worldwide, 60% of car seats are not used or installed correctly.

In normal circumstances, you could take your car and car seat to some fire stations or other locations for a certified passenger safety technician to make sure you’ve install it correctly. While you may be able to find an in-person location that’s open, there are a variety of online and virtual opportunities available. Of course, simply reading the instructions can go a long way. So can researching and then buying a seat that is well-engineered to be easy to install. I found Baby Gear Lab’s testing and ratings to be particularly useful when shopping for my own infant car seat. I even bought their No. 1 pick, the Chicco KeyFit 30, which you can see in this test.

Ah, which brings us to this test. If you’re looking for another element that can help ensure proper child car seat fitment, buy a minivan. The seat height, the colossal door opening and the sliding door itself make it an absolute breeze. However, the 2021 Honda Odyssey in particular is designed to go even further than those inherent advantages. 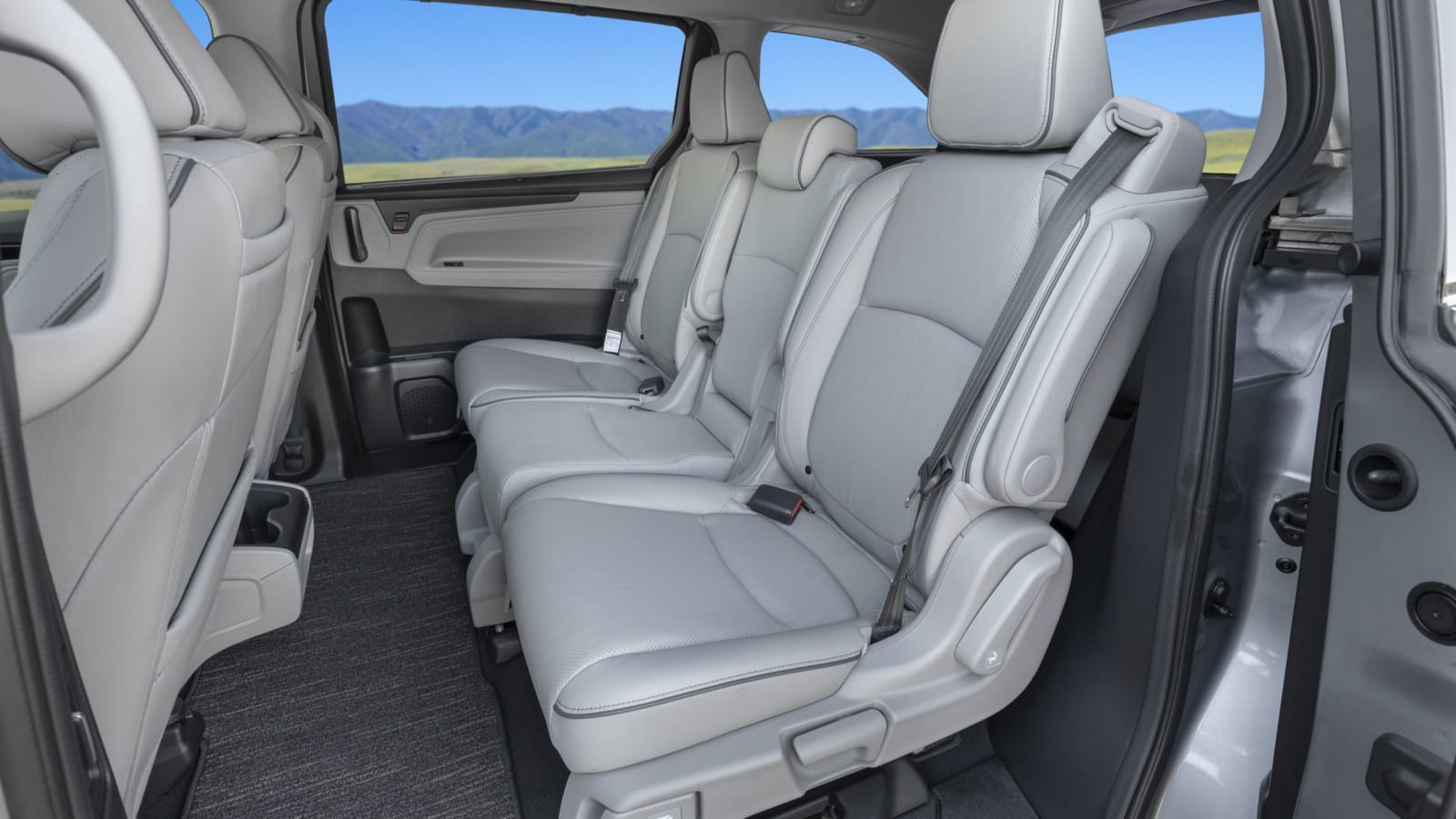 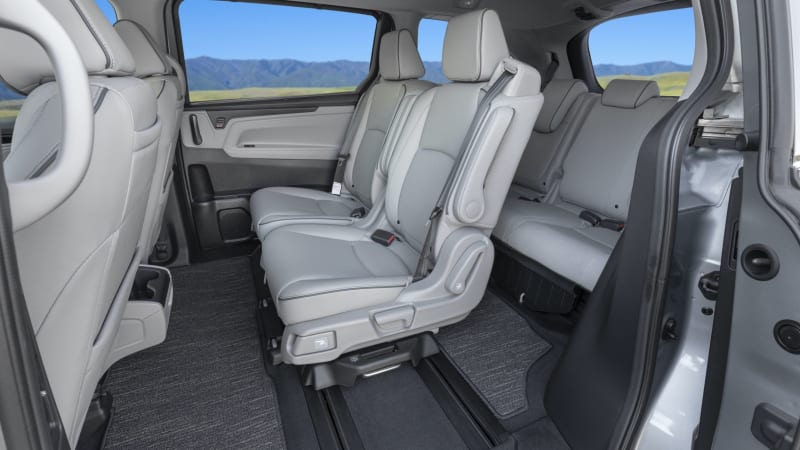 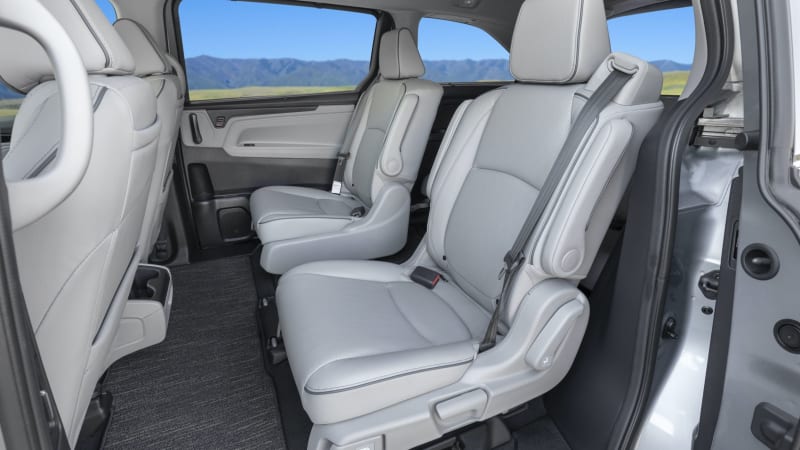 The reason is the standard “Magic Slide” middle row shown above. The middle portion can be removed (the process is simple, but the thing is rather heavy), which then allows the two outboard positions to be moved laterally. This is unique among minivans. It can also recline and slide longitudinally, which is not unique (it also can’t slide fore and aft as much as a Toyota Sienna’s or Kia Sedona’s).

Being able to move the two outboard seats together into the center of the van increases safety, as being further away from the doors and therefore a potential impact is inherently better. There’s a reason it’s recommended that car seats, particularly infant ones, are mounted in the middle seating position.

Below, you can see the difference between the seat being in its most outboard position (and where it would be with the middle seat in place) and where it is when you push both outboard seats together. 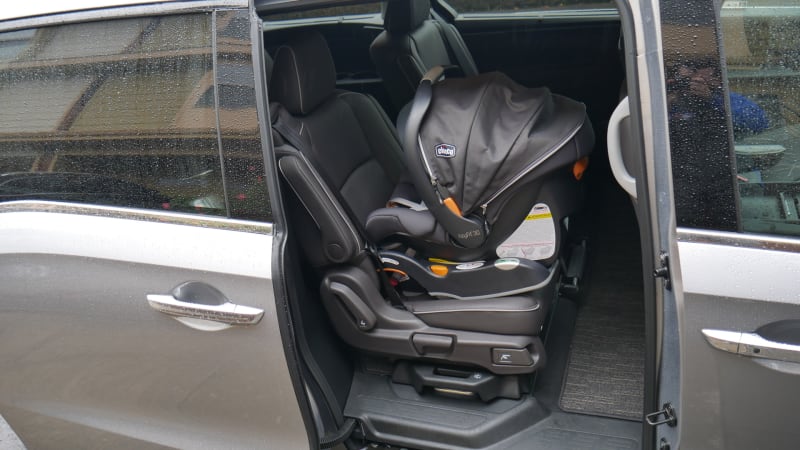 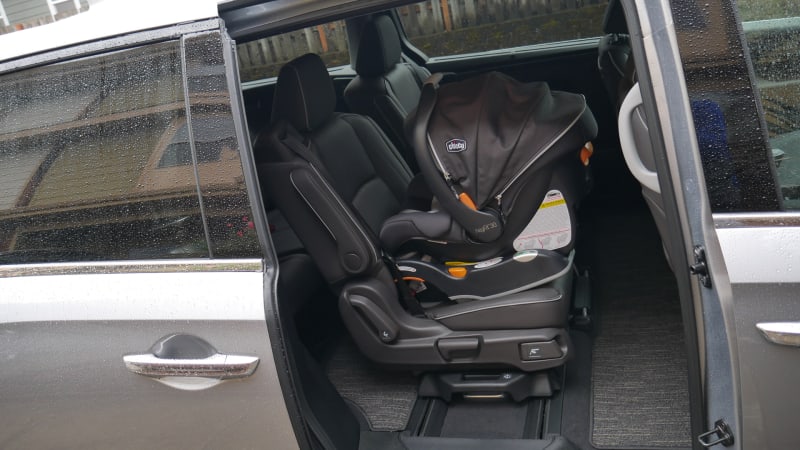 You can also leave one of the outboard seats in place and move the other completely into the center (below). This basically creates the old-school two-person bench seating arrangement. 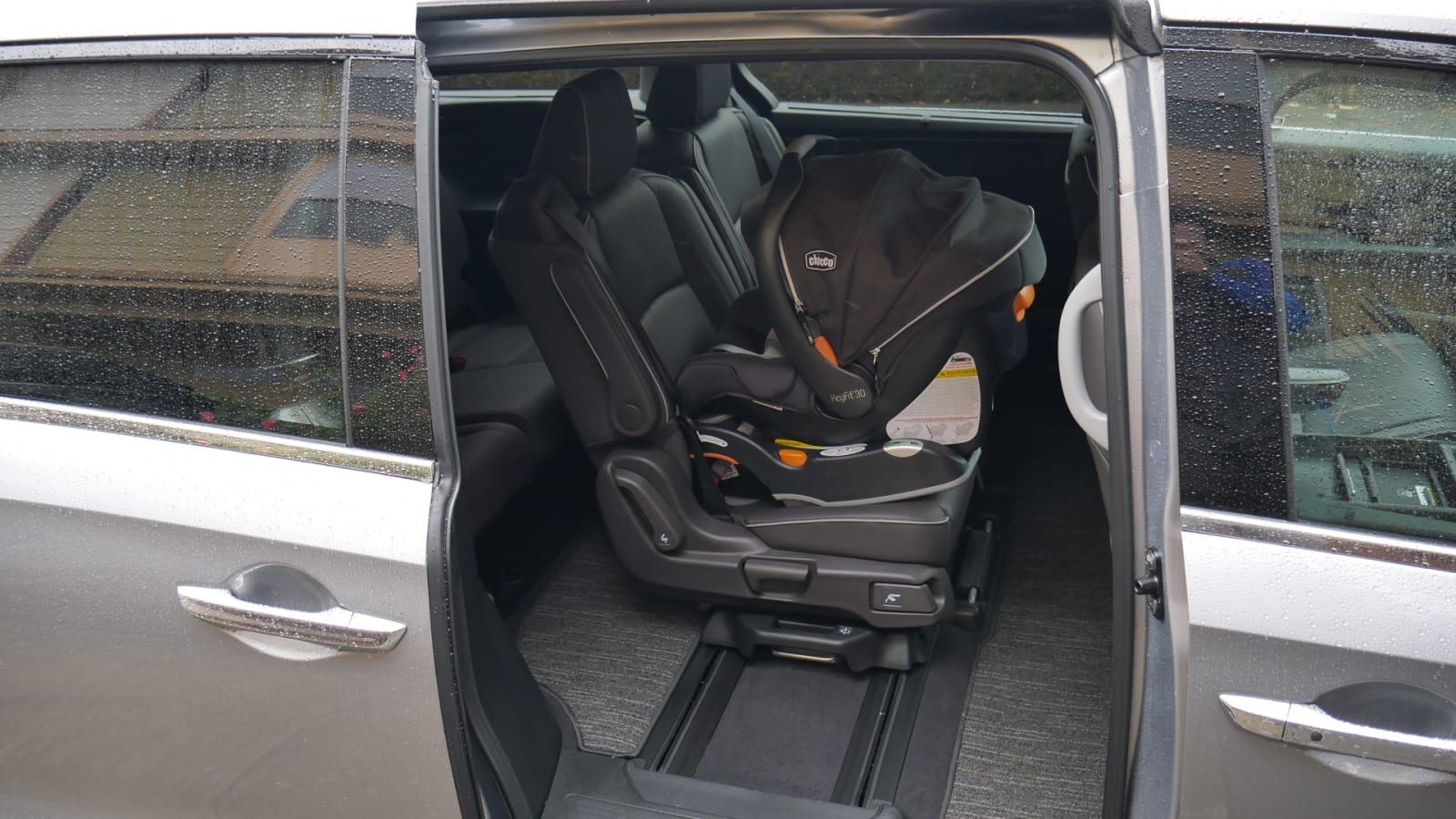 Now, keep in mind that you can do all of this moving around with the car seat and its base in place. That would be the advantage of using one of the outboard seats instead of the middle seat. However, you certainly can mount the car seat to the Odyssey’s middle seat, especially since doing so means you can still use the outboard ones. There’s more than enough shoulder room for even large adults to be comfortable. 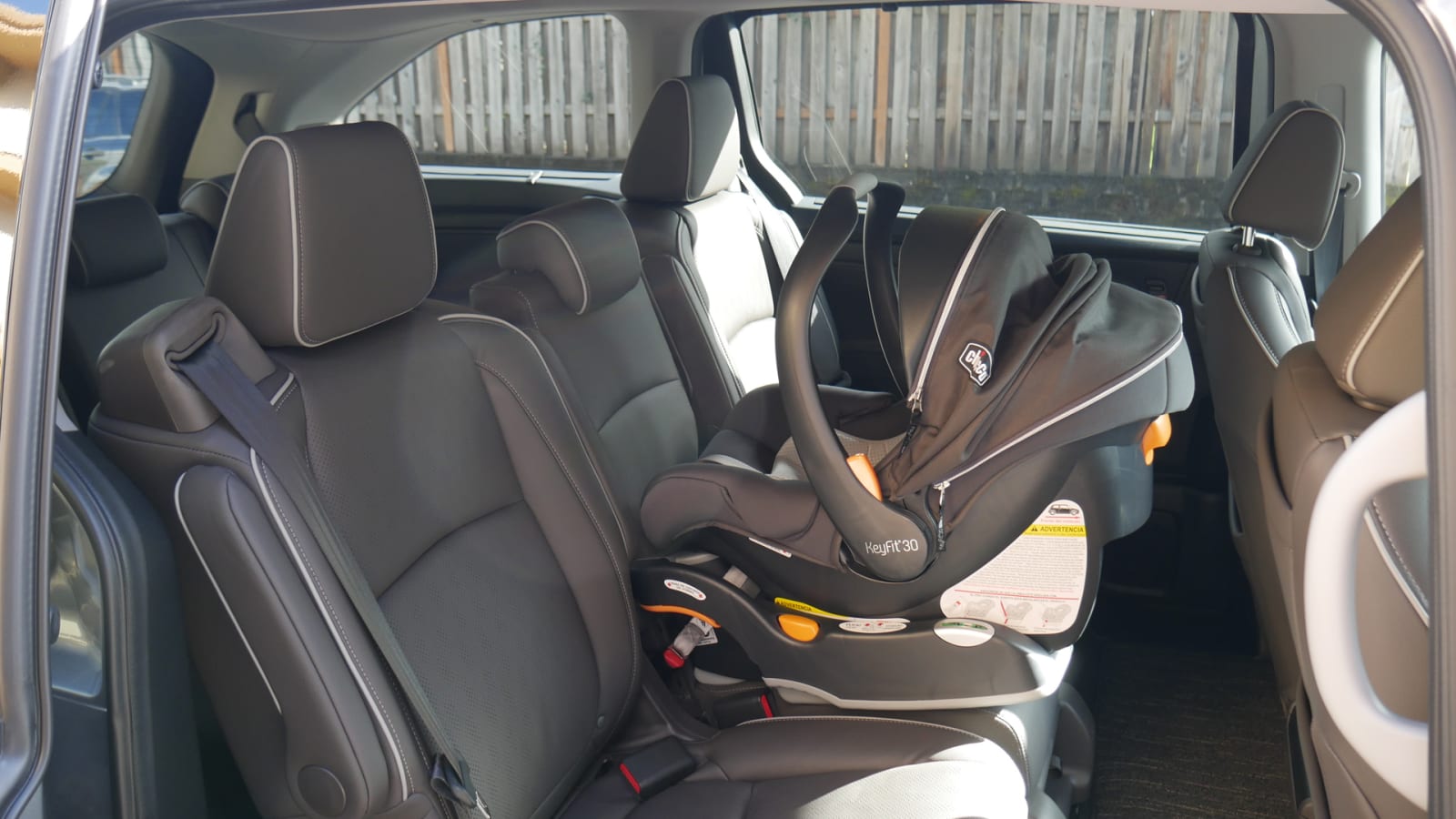 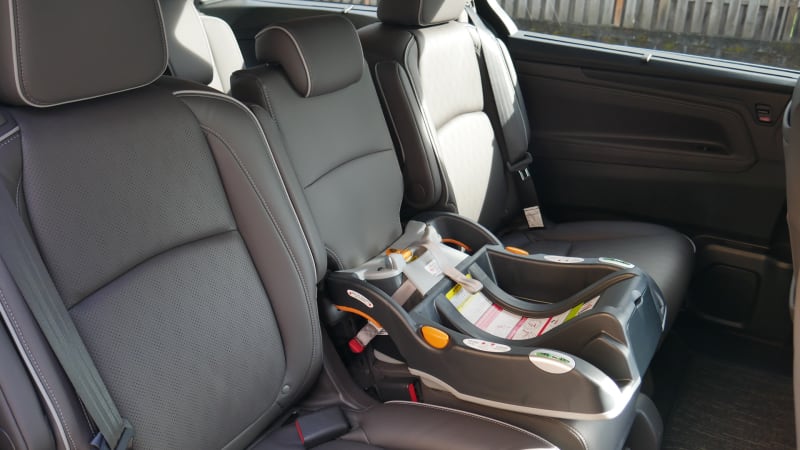 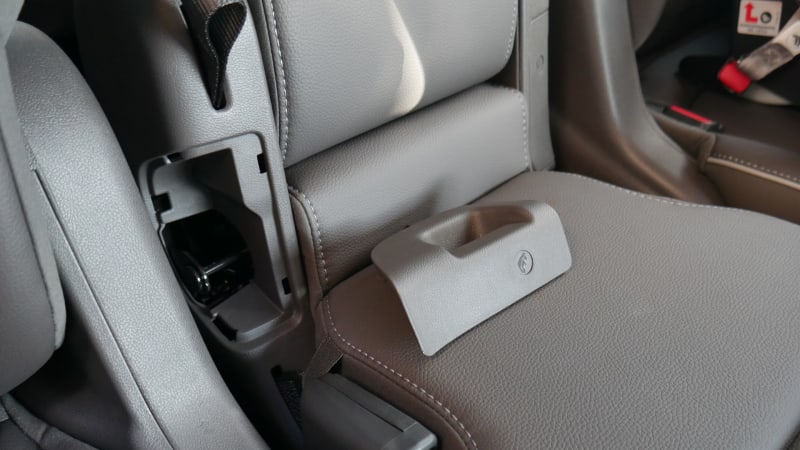 Above you can see the seat, its base by itself and the LATCH anchors that reside behind plastic covers that must be popped off and stored someplace.

There are no such covers on the outboard seats. They are easily seen and reached, which contributed to the Odyssey’s LATCH anchors receiving the best-possible rating of Good+ from the Insurance Institute for Highway Safety. I literally secured the Chicco base within seconds. 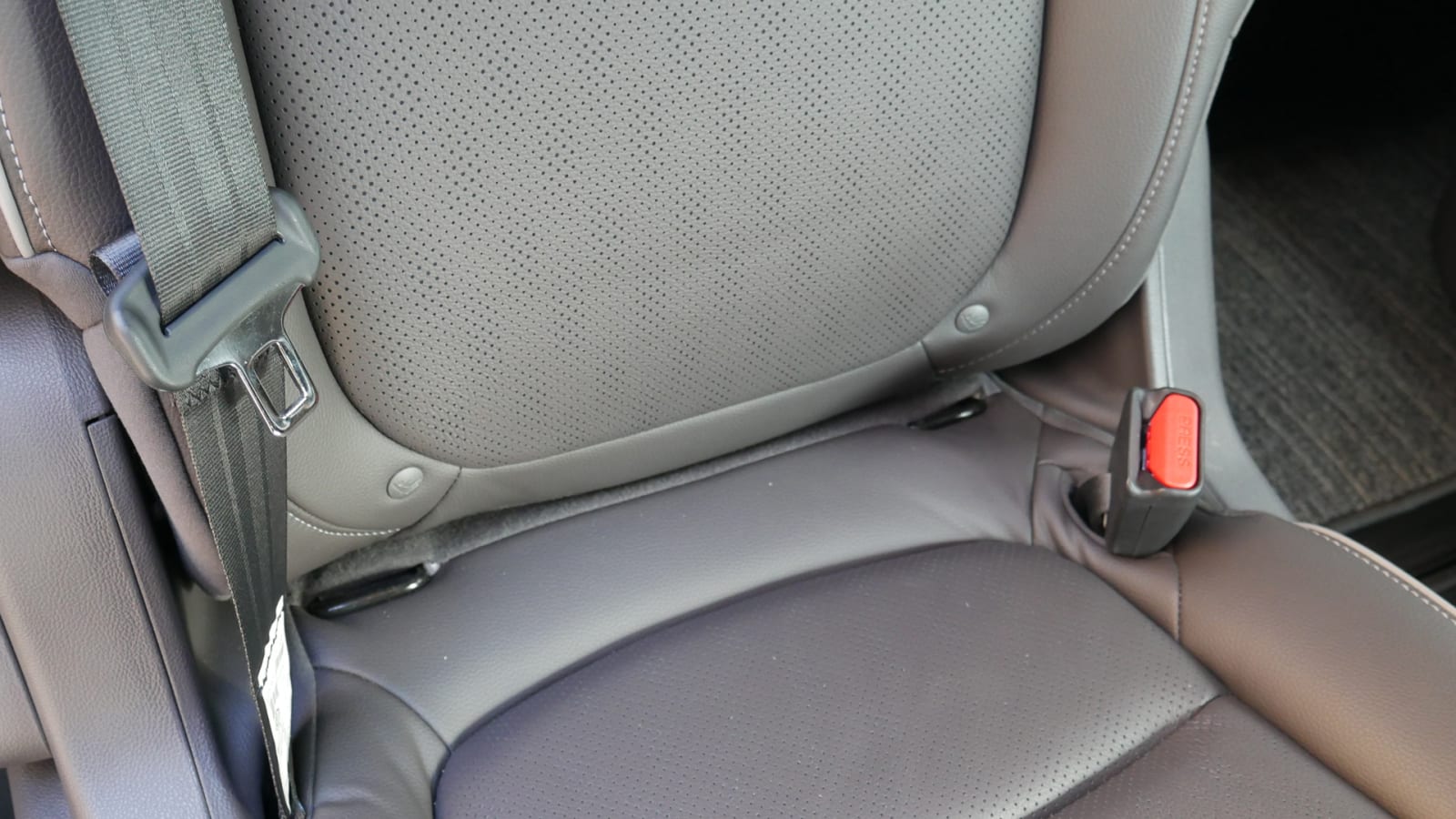 There are also LATCH anchors in the outboard positions of the third-row, though plopping an infant car seat back there would require a core-testing contortionist workout that I’m just not prepared for.

So that’s how a Honda Odyssey makes installing a car seat that much easier on mom and dad. And should you be wondering about other vehicles, the IIHS provides ratings for the cars it tests, while Cars.com is one of the only outlets to rate cars based on their car seat fitment.