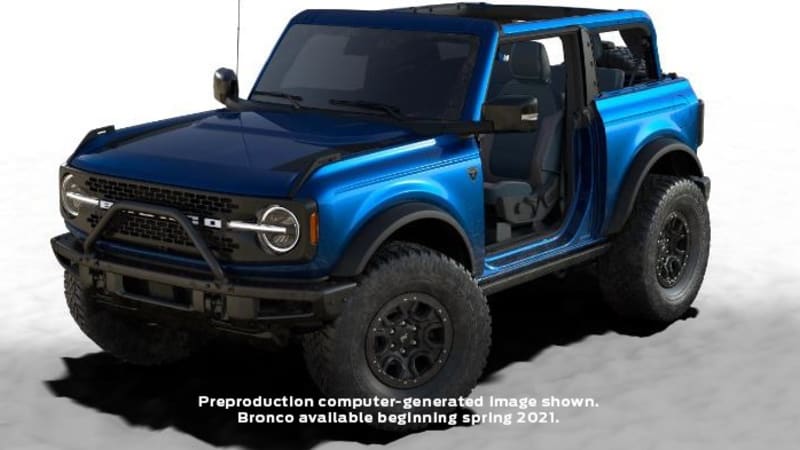 Ford’s sold-out Bronco First Edition is limited to 7,000 units nationwide. Telling it apart from one of the other variants will be relatively easy, because reservation holders will have the opportunity to order a trim-specific color.

Posting on Twitter, the Blue Oval announced the First Edition will be the only Bronco offered in Lightning Blue. It’s a darker shade of blue that almost matches the color of the firm’s logo, and we’ve already seen it on the F-150 Raptor, the Shelby Mustang GT350, and the Ranger, among other models. The computer-generated image published by Ford (shown above) shows how the color looks on the Bronco; in this configuration, it’s complemented by black on the grille, on the bumpers, on the mirrors, on the fender flares, and on the wheels.

Ford hasn’t revealed if it will charge extra for Lightning Blue, or if it will be included in the First Edition’s price, which is pegged at $60,800 for a two-door and $64,995 for a four-door. No extra-cost options were announced, which suggests Lightning Blue will be free. Fully loaded, the First Edition comes with every possible off-road-oriented feature, every piece of luxury equipment available, plus specific decals and a black hardtop, among other things.

Bronco First Edition deliveries are scheduled to begin in June 2021, and this version will reach buyers before the six other trim levels. Ford noted it won’t start building inventory units until it has filled all of the orders it received, so it warned motorists who haven’t reserved a Bronco yet that they may need to wait until 2022 to take delivery.