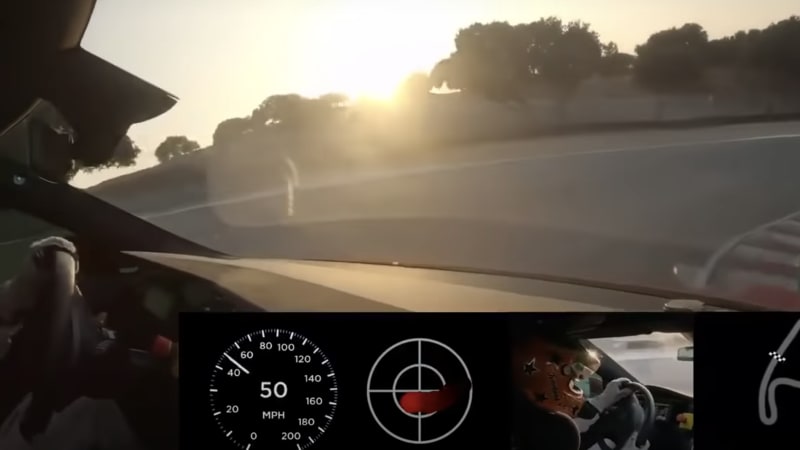 It’s one thing to read that a car, in this case the 1,100-horsepower tri-motor Tesla Model S Plaid, is fast. It’s quite another to see visual evidence in the form of an in-camera video of the tartan-Tesla lapping Laguna Seca in 1:30.3 seconds. Now, thanks to the magic that is the Internet, you can witness the next best thing to being the person belted into the driver’s seat by watching the video up above.

Speaking of the driver, this is apparently well-known YouTuber Sebastian Vittel (not to be confused with F1 driver Sebastian Vettel) behind the wheel. Vittel, which we will assume is an alias, says the S Plaid was on a custom set of Michelin Sport Cup 2 tires that will be released along with the vehicle when it goes on sale in late 2021. The only modification to the vehicle, according to the video description, was a replacement bucket seat that was installed for safety reasons.

To put a 1:30.3 lap in perspective, it’s just a few seconds shy of the McLaren Senna, which set a production car record of 1:27.62 when Motor Trend had it at the track. It’s also faster than any published time recorded by a prototype Lucid Air, an electric sedan that ought to compete with Tesla’s best once it actually goes on sale. Tesla CEO Elon Musk hinted that there are a few seconds to be gained at the track, suggesting that the Model S Plaid will eventually hold, not just the electric vehicle record, but the outright production-vehicle record at Laguna Seca.

We look forward to watching Lucid, Tesla and Porsche continue to battle for electric-sedan track superiority.