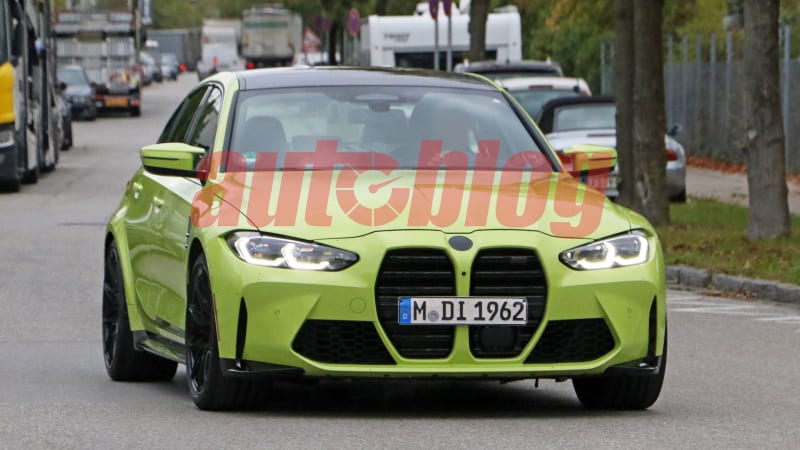 Itching to see what the 2021 BMW M3 looks like in the real world? You’re in luck. Yes, the 2021 BMW M3 and M4 have already been formally revealed, but things often get lost in translation between a photo booth and real life. Fortunately, our spies in Europe sent along these pics of the iconic sport sedan in the wild, where it now roams undisguised and cannot benefit from the assistance of studio photographers.

These two M3s, finished in some flavor of white and what appears to be Sao Paulo Yellow, are clearly both lingering prototypes. BMW’s development engineers didn’t bother to address the badges on either, and the yellow car even has visible perforations in the sheetmetal where camouflage and other body-altering elements were previously fastened; you can see the tattooing all along its rockers and both the front and rear bumpers.

These white and yellow finishes serve to mute some of the new M3’s more over-styled elements, which to us is a good thing. The front end looks much busier in BMW’s press photos than it appears here. The good news for more traditional BMW fans is that this could bode well for the new M3’s road presence when deliveries begin.

The new M compacts are powered by the S58 twin-turbo straight-six. In the standard M3, it makes 473 horsepower and 406 pound-feet of torque; Competition versions make 503 hp and 479 lb-ft. They should do 0-60 in 4.1 seconds and 3.8 seconds, respectively. Compared to the standard 3 Series, the M3 is punched out just about everywhere. The fenders are much wider, the rear bumper has gained a large rear diffuser, and it sports four prominent exhaust tips. These prototypes are also boasting the coveted carbon fiber roof panel, though customers can order a standard steel piece with a moonroof if they prefer to let a little more light in.