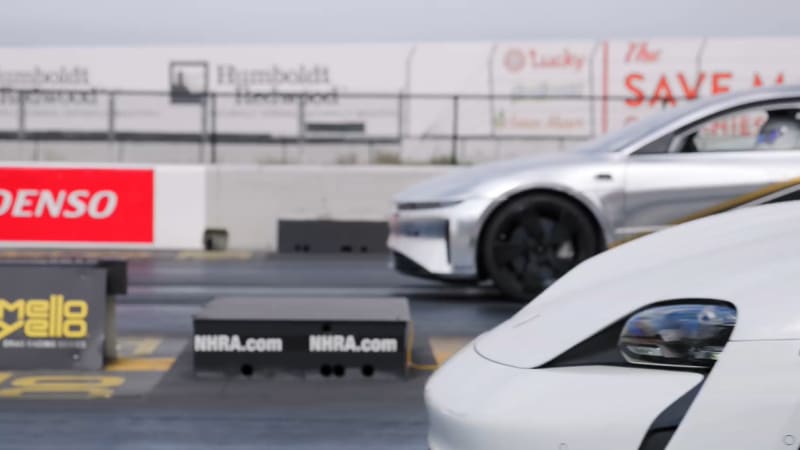 Lucid published a short video that confirms the 1,080-horsepower version of its electric Air sedan will not remain the range-topping model for long. It looks like reports of a quicker, more powerful variant are about to materialize.

Posted on the company’s Twitter account, the eight-second flick shows a lightly camouflaged Air racing down a drag strip against a Porsche Taycan. It shows a stopwatch counting down from 9.90 to 9.62, and it adds that whatever the video is announcing will be “quicker than quick.” Its global debut is scheduled for September 24.

What’s quicker than quick? Check back on September 24 to see #LucidAir answer the question. pic.twitter.com/2WH6qoWs2J

We’re guessing the 9.62-second time refers to how long it takes the Air to cover a quarter-mile. That’s an impressive number, and it could get lower; unverified reports peg the final figure in the low-nine-second range. For context, the Porsche 918 Spyder logged a 9.81-second quarter-mile, while Ford’s electric Cobra Jet racer sprinted through the quarter mile in 8.27 seconds. We’re looking forward to finding out the Air’s trap speed, too.

Lucid is keeping technical specifications under wraps until the sedan’s unveiling, but it has openly teased the high-performance model several times over the past few months. CEO Peter Rawlinson notably explained the front and rear suspension modules are interchangeable, so engineers could theoretically install two electric motors over the rear axle (one for each wheel) and integrate an additional motor into the front axle. This configuration would give the Air through-the-road all-wheel drive, torque vectoring across the rear axle, and the jaw-dropping amount of horsepower needed to blast through the quarter-mile in approximately nine seconds.

Lucid’s drive unit can deliver 670 horsepower, so putting three of them in a car can theoretically unlock a 2,010-horsepower output. We’ll find out if the firm is bold enough to push the Air that far on September 24.