Even in the domestic car bubble that is Greater Detroit, a 2021 Porsche Panamera Turbo S in Papaya Orange will garner some attention. While you might expect most foreign cars to be objects of derision in the heart of America’s auto industry, as it turns out, southeastern Michigan is pretty much like the rest of the world when it comes to retina-burning super-sedans. Heads will turn.

The 2021 Turbo S is the latest iteration of Porsche’s most potent gasoline-powered Panamera. While it plays second fiddle to the Turbo S E Hybrid in terms of overall power, it’s now pretty darn close, thanks to a bump in power, some mild chassis revisions, and a few nip-and-tuck styling tweaks front and rear.

Porsche’s luxury sedan has polarized from the outset, though less for its more luxurious, four-door mission than for some of its more superficial features. It has not been as viciously demeaned by Porsche’s fanbase as its sibling, the Cayenne SUV, but the faithful have not wholeheartedly embraced it either. But while the Panamera has never been the prettiest sedan out there, its competence has never really been in question. As the lineup has matured and sprung wild, high-performance, electrified variants, the sedan has only further grown on us. 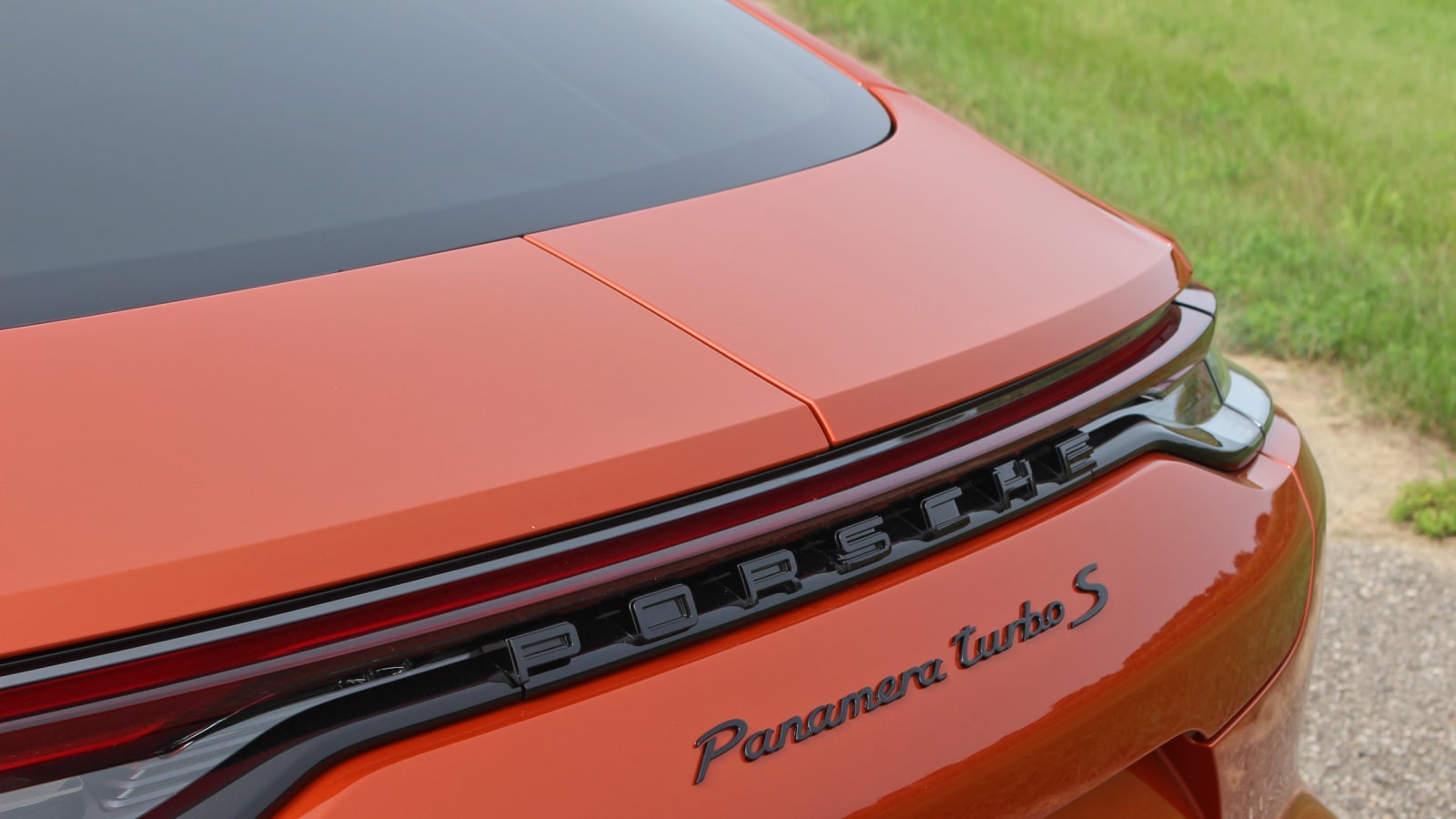 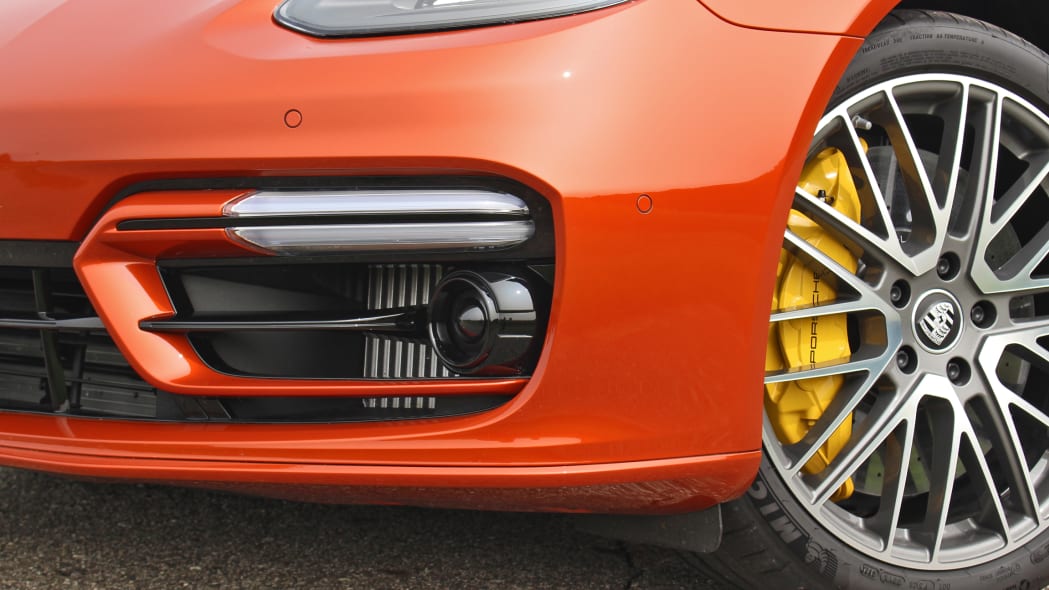 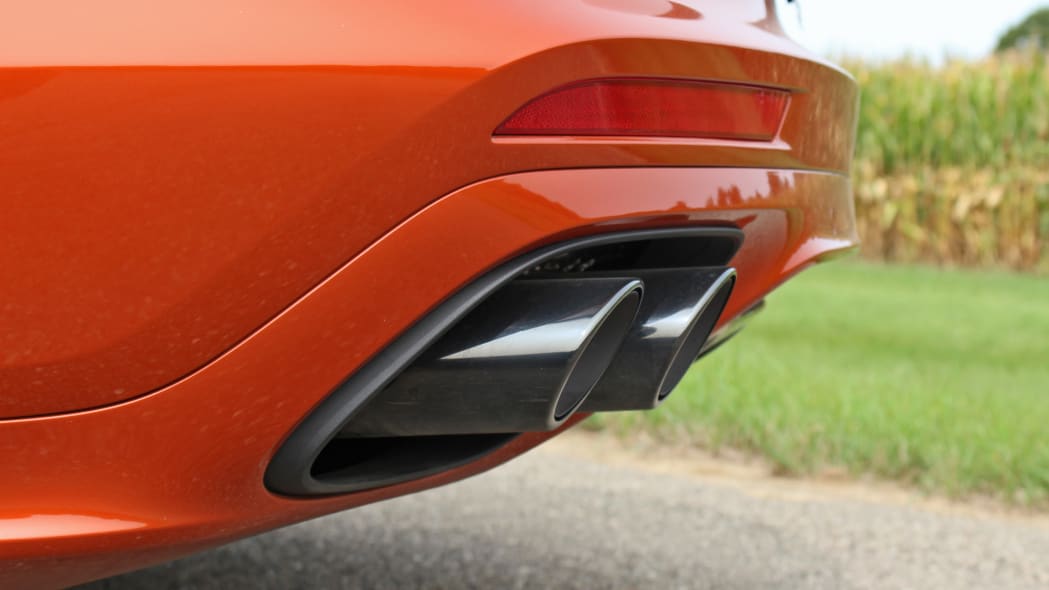 The updates to the 2021 Panamera were rather extensive given the fact that its fundamental underpinnings are unchanged. Just about every model in the lineup got something new, from some minor cosmetic enhancements (including the uninterrupted rear lighting strip and the Sport Design front fascia becoming standard on all models but the Turbo S) to the rather extensive powertrain enhancements for this new Turbo S sedan.

Those include a fairly comprehensive overhaul of the Panamera 4.0-liter V8, including a revised crankshaft, connecting rods and pistons; new injectors and redesigned turbines; and its compression ratio was reduced from 10.1 to 9.7:1 to accommodate the added boost from updated turbochargers. The result is an increase of 70 horsepower, bringing output to 620 hp and 604 pound-feet of torque, and a new name: Turbo S, replacing the plain-old “Turbo.”

With a little help from its eight-speed, dual-clutch automatic transmission and launch control, Porsche says the new Turbo S sedan and its Sport Turismo wagon-lite sibling will crack off a 0-60 run in just 2.9 seconds, which is a full half-second quicker than the outgoing Turbo – not bad for “just” another 70 horsepower. 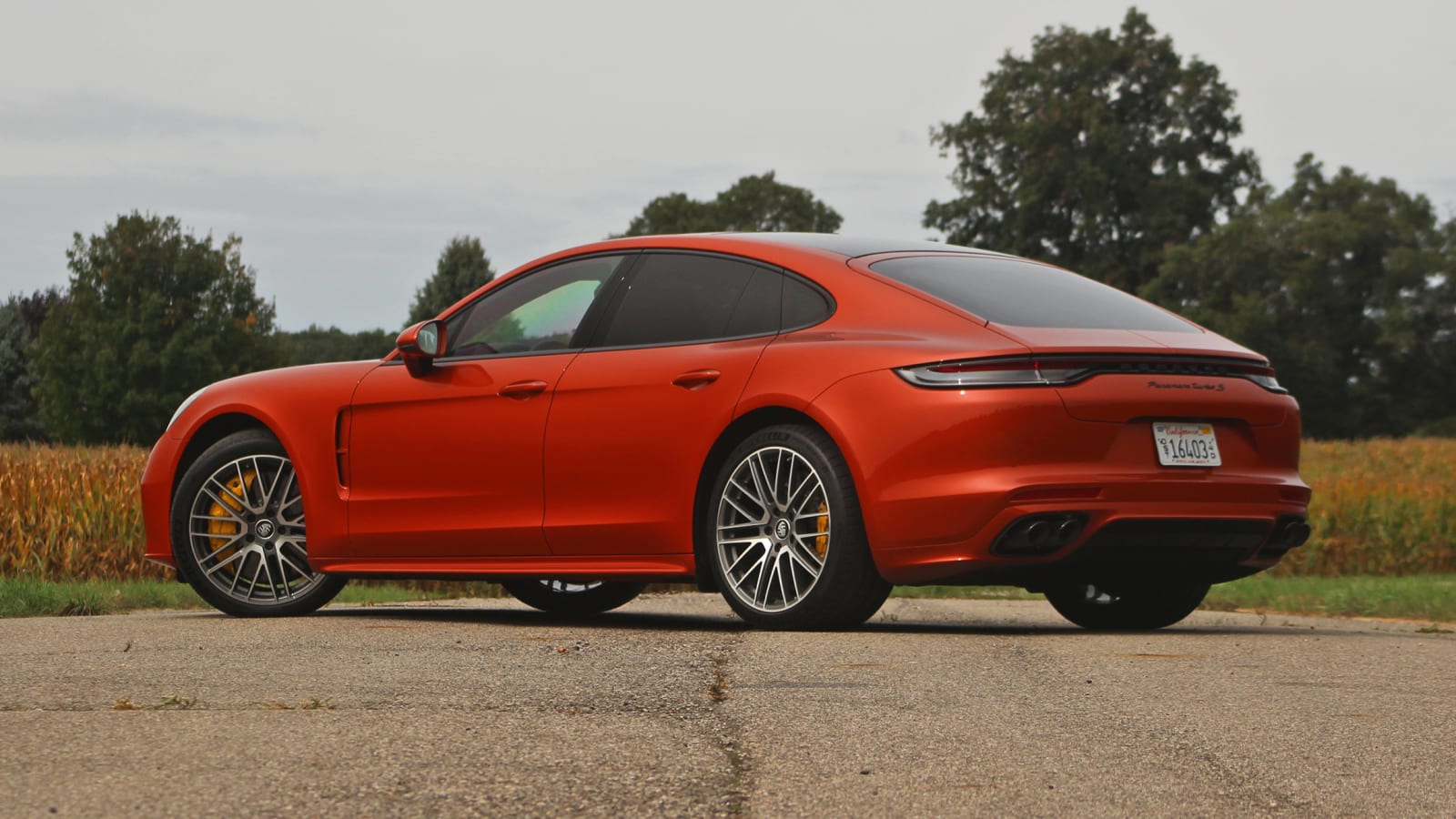 In addition to the engine enhancements, the 2021 Turbo S received some recalibration of its various driveline and chassis systems. From the steering to the Porsche Active Suspension Management system (PASM), just about everything received attention, though Porsche engineers emphasized that most of the updates were on the software side, rather than full-blown hardware upgrades. Inside, most of the upgrades are minor, with the notable exception of the steering wheel, which was lifted from the 992. Porsche has also made Michelin Pilot Sport Cup 2s available as an option, but we can’t imagine it will be a popular one outside of the warmest, driest climates, as its minimal tread profile will not inspire confidence in an unexpected deluge. Nevertheless, getting them isn’t a bad idea. Our test car had the standard summer tires – Michelin Pilot Sport 4S – and we managed to get them talking on multiple occasions.

Remember, besides having all that power, the 2021 Turbo S sedan is a big, heavy car at 198.8 inches long and 4,691 pounds. And it gets bigger. Porsche offers the Turbo S in its long-wheelbase Executive format if you need more backseat room, and there’s always the Sport Turismo. It adds another 100 pounds, but that seems trivial considering the upgrade in both styling and practicality (of course, that’s a minority opinion in the United States where only 10% of sales go to the long-roof version. It’s nearly 50/50 in Europe).

So, while it’s no Hellcat, Porsche still tuned this big, heavy, obscenely powered car to boogie. Get on the throttle with steering dialed in and the rear end will step out eagerly, but not violently. The all-wheel-drive system responds deliberately but progressively to rein in your shenanigans and get you headed off in your desired direction post haste, but we have to admit, its innate playfulness is incredibly alluring. There’s even some tire slippage when using launch control, which was a bit surprising.

Thankfully, though, the Panamera doesn’t feel as big as it is. The steering response and feedback are superb, which is due, at least in part, to the fact that the electric rack shares some of its wizardry with the 911’s. And since this is a Turbo S, Porsche was free to pull back slightly on the luxury elements of the driving experience in the name of engagement, especially when you crank the rotary drive mode selector to the Sport Plus setting, which firms the ride up significantly and allows some wicked exhaust barks when you shift gears. 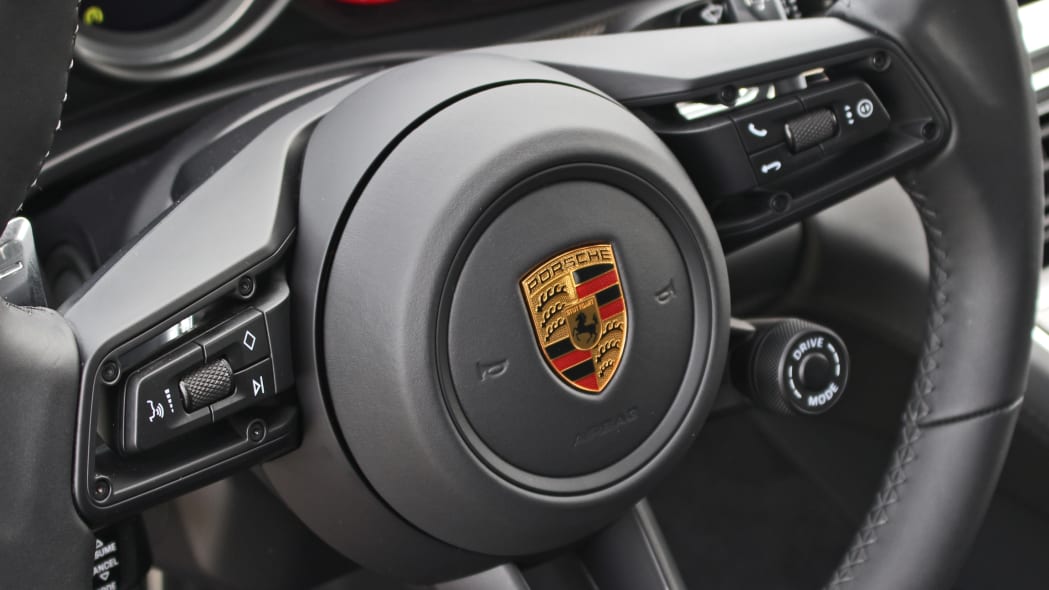 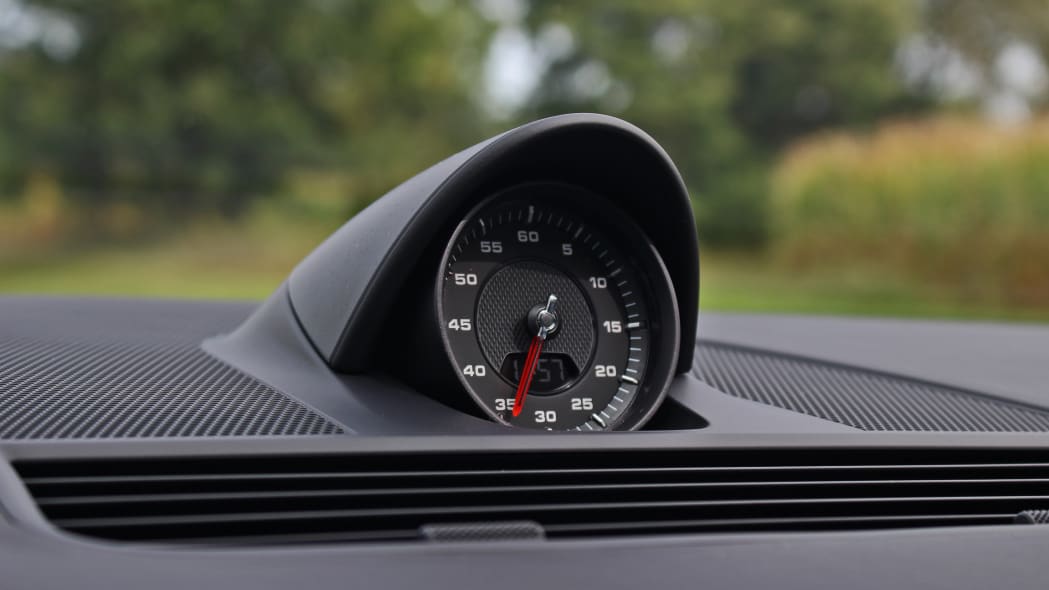 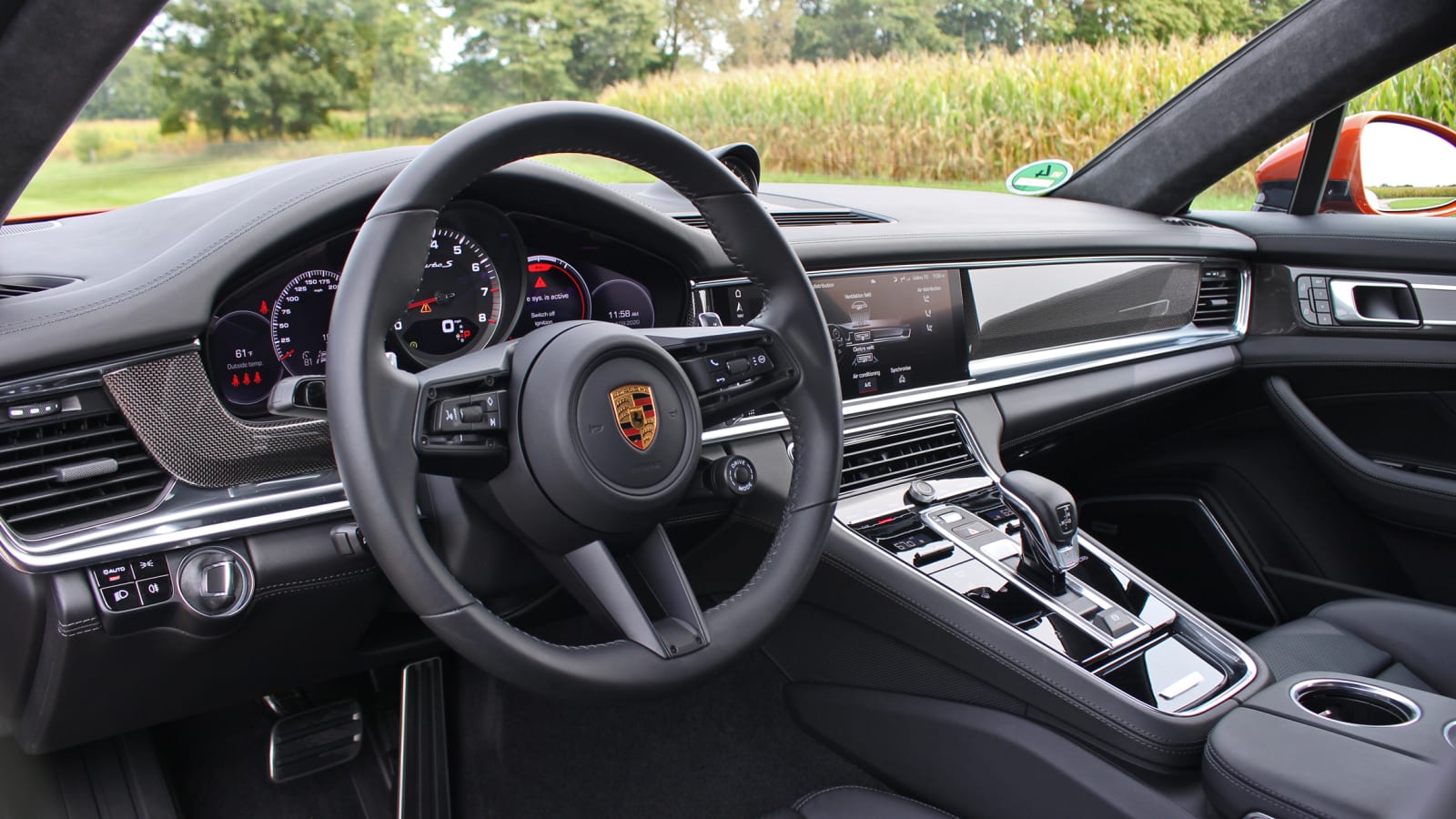 While the 911 and 718 variants can be a bit punishing if cranked to their sportiest settings on the street, the Panamera Turbo S strikes a far more civilized balance, befitting its four-door layout. Even in Sport mode, the exhaust note is not overly intrusive, nor will the suspension completely liquify your kidneys on America’s broken urban concrete. You’ll be more comfortable on longer highway trips with both dialed back, but neither rises to the level of unpleasant under normal circumstances.

The Turbo S should slot in just below the S E Hybrid model in terms of pricing, as the regular Turbo did before. However, we expect it to cost more than its predecessor owing to both the 2021 enhancements and the fact that it sprouted an “S” at the end of its name. We’ll know for sure once we get a closer to its formal U.S. launch early in 2021.

The 2021 Porsche Panamera Turbo S is a status symbol with substance. It’s effectively a practical toy for those who can afford a little extra fun and frivolity with their luxury, and by those standards, it’s immensely satisfying. It’s not a great value, nor is it supposed to be, but this is about as engaging as big gasoline-powered luxury sedans get. It’s just practical enough to be justifiable but wild enough to scratch that high-performance itch from time to time. And if you’re a little worried about your carbon footprint, there’s the Turbo S E-Hybrid and its all-electric range. Win/win? We think so.

We don’t want to go too far down the “911 of sedans” rabbit hole, but there’s something to it. Taking the theme more broadly, the 911 itself is on the rawer end of the grand touring spectrum, and so too is the Panamera with regard to luxury sedans. Every new model the company produces inevitably has to prove itself worthy of the Porsche badge and the revised 2021 Panamera more than passes muster.