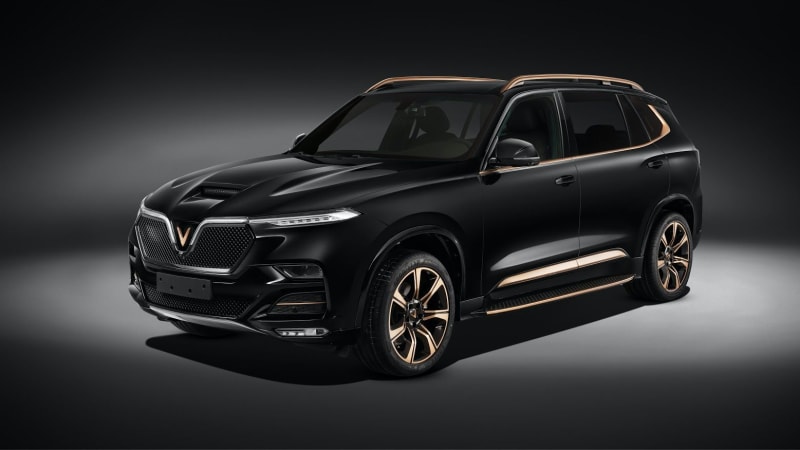 Vietnam-based VinFast is making its upmarket ambitions clear by releasing a flagship SUV named President. It’s an evolution of the last-generation BMW X5 that’s powered by a V8 engine sourced from General Motors.

Several styling cues differentiate the President from the Lux SA2.0 it’s based on, including a mesh grille, a hood scoop, and copper accents. Inside, the passengers are treated to wood trim and quilted leather upholstery, while the center console features a 12.3-inch touchscreen for the infotainment system. It remains a five-seater, though the outer rear seats are heated, cooled, and massaging, and the center console receives a 230-volt power outlet.

BMW offered the F15-generation X5 with a twin-turbocharged, 4.4-liter V8, but VinFast followed the path blazed by thousands of hot rodders and dropped an American engine under the President’s hood. It’s a 6.2-liter EcoTec3 V8 tuned to send 420 horsepower and 460 pound-feet of torque to the four wheels via an eight-speed automatic transmission. In the United States, this engine commonly powers Chevrolet’s Silverado, Tahoe, and Suburban, their GMC-branded counterparts, and the Cadillac Escalade. It’s also available as a crate engine.

VinFast will build 500 units of the President. Pricing starts at about $164,000, according to CarScoops, and the SUV will only be sold in its home country. You’re out of luck if you want one in the United States, but heads-up, engine swap wizards: its development seemingly confirms the EcoTec3 V8 fits in the X5 with relative ease.

Founded in 2017, and part of one of Asia’s largest conglomerates, VinFast has its sights set on the American market. Earlier in 2020, it announced plans to introduce an electric, Pininfarina-designed crossover on our shores in the coming years. It will deliver about 300 miles of driving range thanks in part to a battery pack manufactured by LG Chem, but whether it will be new from the ground up or based on a BMW architecture remains to be seen. Pricing information is under wraps, too. Mass production is tentatively scheduled to begin halfway through 2021, so the first units will likely arrive here for the 2022 model year if everything goes according to plan.