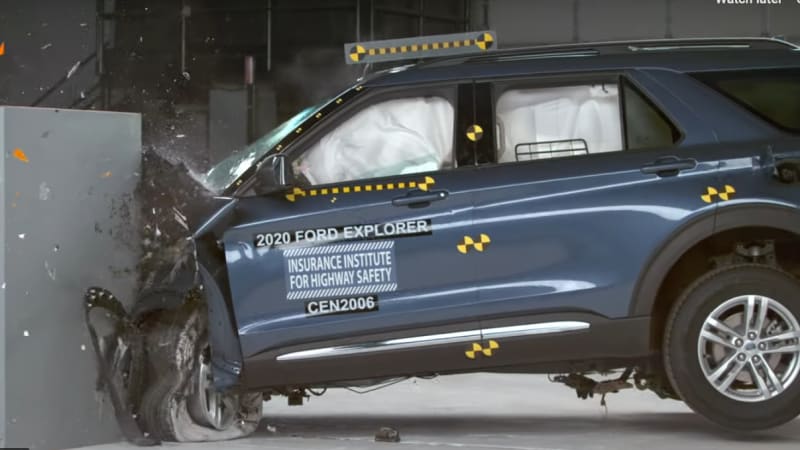 The 2020 Ford Explorer has been named a Top Safety Pick+ by the Insurance Institute for Highway Safety, the agency’s best rating. The redesigned Explorer initially fell short of that mark, however, only making the grade after Ford introduced a running change to the vehicle’s design starting in May 2020 — a change made to the 2020 Lincoln Aviator as well.

To achieve a Top Safety Pick+ award, a vehicle must have a Good performance rating in all six of the agency’s crash tests. It also must have Acceptable or better ratings for all of its available headlamps and must earn Advanced or Superior ratings for its automated collision avoidance systems in tests of their performance against pedestrians and other vehicles.

The 2020 Explorer initially achieved only an Acceptable performance in the IIHS’s driver’s-side small-overlap crash test, as the agency found a risk of injury to the driver’s left foot due to intrusion into the footwell. Ford subsequently modified the design of the front subframe in a running change to Explorers and to Lincoln Aviators built after May 2020. The modified Explorer was re-tested, and this time the model achieved a Good performance in the driver’s small-overlap test. That, combined with a Superior performance in both tests of the standard collision-avoidance system plus Acceptable ratings for both headlight systems, pushed the 2020 Explorer over the goal line to Top Safety Pick+.

The Aviator, which shares the Explorer’s platform, has received the same modification and achieves the same crashworthiness ratings. However, its standard headlights are judged Marginal, and therefore the 2020 Aviator achieves only the Top Safety Pick rating (even though its optional curve-adaptive LED headlights are judged Good).