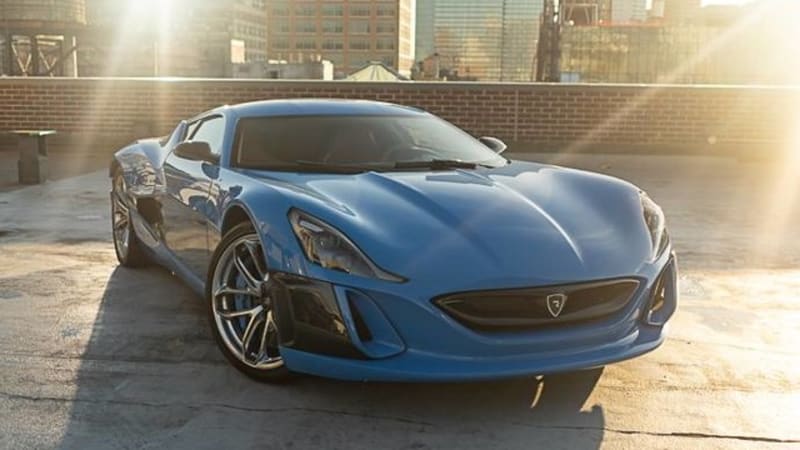 Croatia-based Rimac wouldn’t be in a position to buy Bugatti if it hadn’t released the Concept_One, its first model. It built eight examples of this electric hypercar, and one is unexpectedly listed for sale in New York City.

Exotic car specialist and official Rimac dealer Manhattan Motorcars added a Concept_One to its inventory in September 2020. Autoblog learned it has about 112 miles, but it’s a new car that has never been registered. The person who buys it will be the first owner. It’s finished in an elegant combination of Riviera Blue with a Cognac Gold leather interior. There are carbon fiber accents inside and outside.

We admire the Concept_One’s styling because it’s original. It’s not a Xerox copy of an existing car, yet it manages not to look like a generic supercar from a video game whose creators didn’t want to pay licensing fees. And yet, its claim to fame is under the body. Power comes from a four-motor electric drivetrain that develops 1,224 horsepower and 1,180 pound-feet of torque. Rimac quotes a 2.5-second sprint from zero to 62 mph, and a 220-mph top speed. Alternatively, it delivers up to 210 miles of range when driven with a steady foot.

Rimac built eight examples of the Concept_One, but only seven remain. Top Gear and Grand Tour host Richard Hammond destroyed one in 2017 by accidentally driving it off a mountain road during a hill climb. It landed on its roof and caught fire after narrowly missing a house. He recovered, and the race’s organizers were fined $5,000.

Manhattan Motorcars listed the Concept_One at $1.6 million before taxes and fees. It’s a relative bargain because it’s an exceptionally rare car that also happens to be a significant milestone in Rimac’s history. We don’t think the next owner will lose money on it … assuming it stays shiny side up and in one piece, of course.

If you miss your chance to buy this Concept_One, or if you want an electric car that’s even quicker, you’ll need to wait until Rimac introduces the production version of the C_Two. It was scheduled to make its debut at the canceled 2020 edition of the Geneva auto show, and the company took advantage of this setback to continue fine-tuning the car. Although its final specifications have yet to be announced, the concept that previewed it offered 1,914 horsepower, 1,696 pound-feet of torque, a 1.8-second sprint to 62 mph, and a 258-mph top speed. Oh, and 404 miles of range, thanks in part to a mammoth 120-kilowatt-hour battery pack. 150 units will be built.