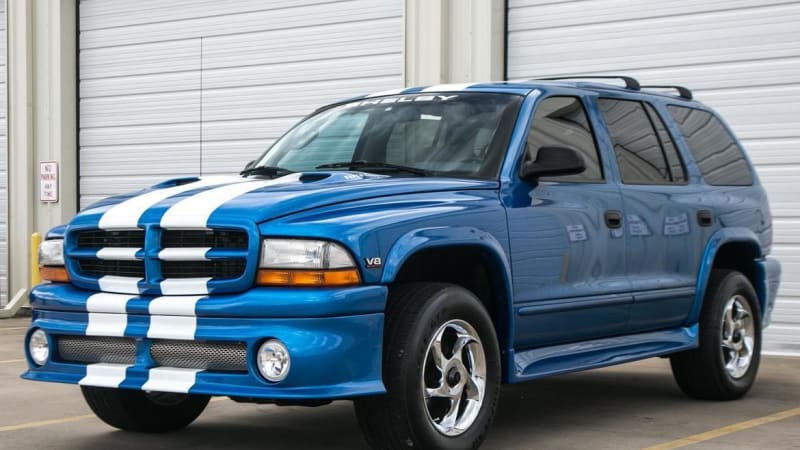 Dodge confirmed it will only build the Hellcat-powered Durango for six months. If you miss your chance to buy one, or if you want something a little rarer, a dealer in Texas is selling a first-generation Durango tuned by Shelby.

Don’t let the body kit and the chromed alloys fool you; this is not a “Pimp My Ride” prop. It’s one of the roughly 300 units of the first-generation Durango that emerged from Shelby’s workshop in the late 1990s. Called SP-360, it’s powered by a supercharged version of Dodge’s 5.9-liter V8, which produces 360 horsepower and 412 pound-feet of torque, enough for a 7.1-second sprint from zero to 60 mph. The eight-cylinder spins all four wheels.

We can hear you from here: This behemoth has less power than a 2021 Chrysler 300, and it logs the same zero-to-60-mph time as a Honda Civic Hatchback, so what’s so special about it? Keep in mind it’s old enough to order a pint, and a 360-horsepower V8 was rather impressive in 1999, especially when it was bolted between the fenders of a family-friendly SUV. Ferrari’s 360 Modena put only 40 more horses under the driver’s right foot.

Enthusiasts could count on a suspension made firmer and lower to keep the extra power in check, and six-piston front calipers were available at an extra cost. What they couldn’t count on was keeping a low profile. Every SP-360 was finished in Viper Metallic Blue with contrasting white stripes, a combination inspired by the mighty Viper. And, the bling-tastic chromed alloys were complemented by a deeper front bumper, a specific hood with twin scoops, side skirts, plus twin round exhaust tips that poked through a redesigned rear bumper.

Inside, Shelby added bucket seats for the passengers in the first and second row (those seated in the third row were stuck on a run-of-the-mill bench), gauges mounted on the driver-side A-pillar, carbon fiber trim on the dashboard and the center console, plus a numbered plaque next to the transfer case lever. Carroll Shelby personally signed the one shown in our gallery in February 2003, though its serial number is not visible in the images.

Dodge planned to sell 3,000 examples of the SP-360, according to period documents, but it only ended up finding a home for about 300. The one offered for sale in Texas has been modified with a more aggressive cam, a larger throttle body, and a high-volume fuel pump, according to the selling dealer. It has approximately 28,300 miles, it looks relatively well-preserved, and it’s listed at $24,995. It’s certainly not cheap, especially considering Barrett-Jackson sold a 53,000-mile SP-360 for $8,250 in 2019, but when are you going to find another one?

For context, the 2021 Durango SRT Hellcat packs a supercharged, 6.2-liter V8 that delivers 710 horsepower and 645 pound-feet of torque. It’s celebrated as the most powerful series-produced SUV in the world, an honor that earns it a base price of about $81,000.