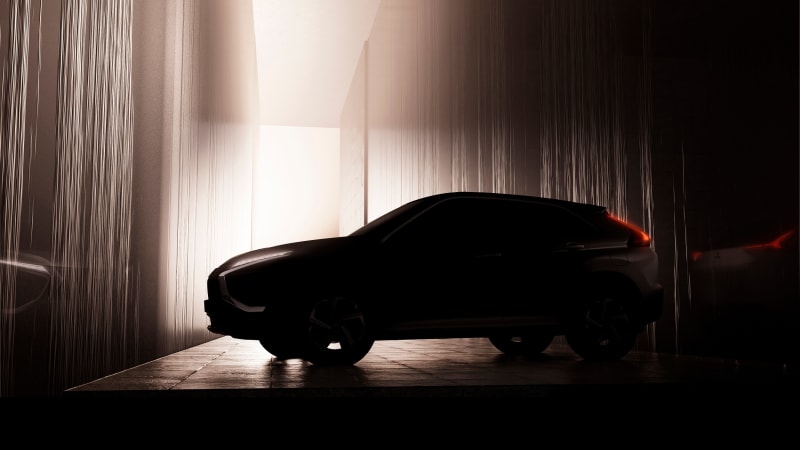 Mitsubishi’s long-promised new models are right around the corner. It released a dark image to preview the 2022 Eclipse Cross, which will boast comprehensive visual updates when it arrives in the first quarter of 2021.

Although the photo keeps the full design under wraps, we can tell the Eclipse Cross falls in line with the rest of the Mitsubishi range by adopting new-look headlights with swept-back LED accents and thick pieces of C-shaped trim. Few would qualify these changes as revolutionary, but bigger modifications are found out back. The preview image suggests — and earlier spy shots confirm — that stylists have smoothed out the crossover’s rear end, which some have likened to the unfortunate Pontiac Aztek. The end result is a sleeker, less hunchback-like design.

Mitsubishi claims the nip-and-tuck makes the Eclipse Cross look more upscale and energetic. We’ll wait until it shines more light on its entry-level crossover to decide if it has achieved its goal. Our hopes are high, because the Eclipse Cross will usher in the design language that will permeate all of the brand’s new models in the 2020s.

“The Eclipse Cross is the first step toward the next generation of Mitsubishi Design, and there is so much more to come,” said Seiji Watanabe, the general manager of the company’s design department, in a statement.

Mitsubishi focused on exterior design, but we’re assuming the 2022 update will also bring a new-look interior. We don’t know if the firm will make mechanical changes. As of writing, the Eclipse Cross is only offered with a turbocharged, 1.5-liter four-cylinder engine that makes 152 horsepower and 184 pound-feet of torque. It spins the front wheels via a continuously variable transmission (CVT), though all-wheel drive is offered at an extra cost.

Additional details about the 2022 Mitsubishi Eclipse Cross will emerge in the coming months. When it arrives, it will join the updated Outlander PHEV (which will receive an improved hybrid powertrain) and the redesigned Mirage in showrooms. Finally, the next-generation Outlander is due out in the second quarter of 2021.